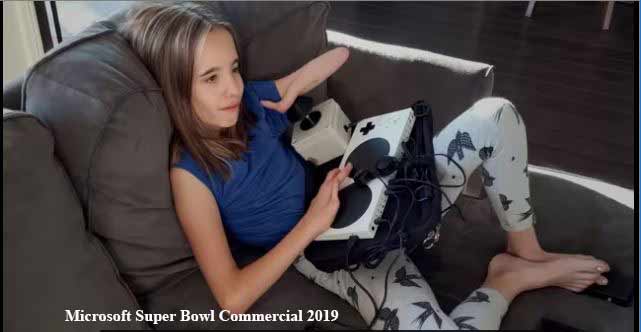 Last year for the holidays, Xbox released a commercial which showed excited neighborhood kids racing to a friend’s house, just in time to see him conquer a video game. All the kids cheered as their friend celebrated; it was a heartwarming, poignant ad, in large part because the friend everyone was cheering on had a noticeable disability. That little boy, Owen, is now back for another ad, this time for the Super Bowl.

Owen, who has a genetic disorder called Escobar syndrome, is featured along with numerous other children with various disabilities in an ad for a new adaptive gaming controller. The controller allows for more inclusive gaming, so gamers with disabilities can play with their hands, feet, mouth, or head. According to Disability Scoop, Microsoft has had a larger emphasis on inclusivity and accessibility since Satya Nadella became CEO. Nadella has a child with cerebral palsy.

The final version of the ad will be released during the big game, but an extended version is already available on Youtube, in which the children and their parents explain why this is so meaningful to them.

“It’s his way of physically interacting with his friends when he can’t otherwise do it,” Owen’s dad said, while a mom said, “She’s never had the freedom to play at the level she knows she could.” One of the children, Ian, explained, “I never thought it was unfair; I just thought, this is the way it is and it’s not going to change.”

Owen likewise chimed in about why he liked the adaptive controller so much. “Now everyone can play!” he said. His dad even got emotional talking about how much the controller means to them. “One of the biggest fears early on is, how will Owen be viewed by the other kids?” he said. “He’s not different when he plays.”

READ: Claire, Frank, and Ben prove that even with illness and disability, life is worth living

“No matter how your body is, or how fast you are, you can play,” Owen said. “It’s a really good thing to have in this world.”

The ad, titled “We All Win” will air during the Super Bowl and shows how every person, no matter their abilities or disabilities, can be empowered to achieve their goals with the right tools and a society that is willing to support them.