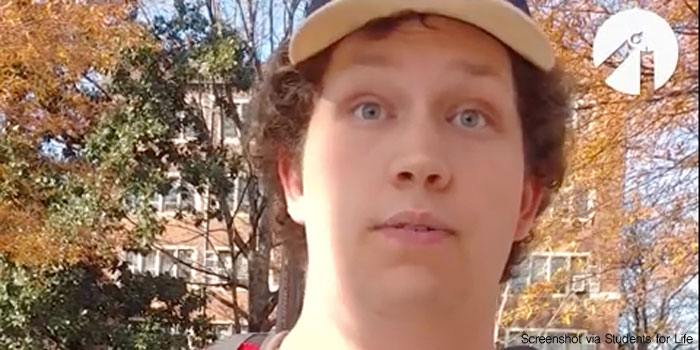 It’s not unusual to see a college student argue in favor of abortion. That’s heartbreaking enough on its own, that students would feel they have to kill their own preborn children to safeguard their own futures. But one college student took it to an even more perverse level, stating that it should be allowable for children to be killed up until age two. And really, when you think about the pro-abortion position, infanticide is the next logical step. Abortion is wrong, and this student’s logical leap to the next step — killing children outside the womb — helps to illustrate why.

The video, below, released by Students for Life of America, was filmed at the University of Tennessee, Knoxville. In it, Students for Life of America’s Appalachian Regional Coordinator, Brenna Lewis, debates with a student who advocates for infanticide. When told about another student who said that children should be allowed to be killed up until age two, the student in the video said he would “buy that.” “The fact of the matter is, without communication, we have no way of knowing if you’re sentient or not,” the student said. “I mean, it’s no different than this tree. It’s alive. But is it sentient? I don’t know. I cannot communicate to it.”

Basically, this student argues that even though, in his opinion, a child’s sentience can be neither proven or disproven (and he mistakenly assumes that sentience and communication are tied to a human’s capacity for speech), we should err on the side of death instead of life. The student’s statement was slammed by Students for Life of America President Kristan Hawkins: “The shocking video sadly represents the mainstream of the pro-choice movement. When Planned Parenthood consistently opposes even common-sense regulations, such as prohibiting Down syndrome abortions, we should not be surprised that people are increasingly joining the pro-life movement. Young people continue to move more and more away from the pro-choice movement because of their extreme positions, justifying even infanticide,” she said.

While the video may be shocking, it’s worth noting that it’s not entirely unusual; pro-abortion activists have advocated for infanticide multiple times, and abortionists themselves have admitted to killing babies born alive after an abortion — some caught on tape in Live Action’s Inhuman investigation. Abortion corporation Planned Parenthood has also expressed support for infanticide. In the video below, late-term abortionist Carmen Landau claims that preborn children in the womb won’t experience any suffering, “and so that, I think, helps us all to feel more comfortable with this [abortion],” she says. But since when should a society be trying to find reasons to “feel more comfortable” with violence inflicted on innocent humans?

We know with scientific certainty that a preborn baby is alive. The term “fetus” is just a description of the human being’s development status, just like baby, toddler, child, or teenager. The only difference between a preborn baby and a child that has been born is location. And once you begin to argue for the right to take life, where do you really draw the line?