The CEO of StemExpress took the stand on Thursday in the preliminary hearing against the Center for Medical Progress (CMP) investigators David Daleiden and Sandra Merritt. According to CMP, she admitted in court that when a fetal brain is harvested, the head may still be attached to the body and that StemExpress does indeed harvest and supply fully intact aborted children. Because using feticide such as Digoxin damages the “specimens,” these children had the potential of being aborted alive.

“That is an especially gruesome admission, but it begs the question: how did they get these fully intact human children?” Peter Breen of the Thomas More Society, which is representing Daleiden at the hearing, told LifeSiteNews. “If you have a fetus with an intact head and an intact body, and intact extremities, that is something that would indicate that child was born alive, and then had their organs cut out of them, or that the child was the victim of an illegal partial-birth abortion.

“Both of these are gruesome and violent acts.”

The StemExpress CEO, known during the hearing as Doe 12, had been recorded during a May 2015 meeting with Daleiden and Merritt who were undercover as the owners of a biotech company interested in doing business with StemExpress. In the video of the meeting, Doe 12 can be heard saying that they’ve “done a lot” of “intact cases” which is understood in the industry to mean whole fetal bodies.

One particular StemExpress order, seen below, requested a fetal kidney from a fetus between 18 and 20 weeks old for same-day pickup. The instructions required that the baby be “without Digoxin applied.” Digoxin is what kills the preborn baby before it is delivered stillborn and intact during an induction abortion. The order also requested “Personal pick-up on site near clinic location to reduce is[c]hemia time.” This means they wanted the body before the blood supply left the organs.

What this implies, is that this baby would possibly be born alive in order to harvest his or her organs the way the researchers wanted them: fresh. If Digoxin were given, the preborn child would die in the womb and would not be delivered for two days, meaning the organs would no longer be fresh, as researchers had requested them to be. This abortion procedure is described by former abortionist Dr. Anthony Levatino in the video below:

In a separate CMP video featuring former StemExpress ex-procurement technician Holly O’Donnell, O’Donnell spoke about her time working at the Planned Parenthood Mar Monte’s Alameda clinic in San Jose, CA and confirmed that babies were born alive in order to procure fresh organs. On one occasion, she was told to harvest the brain from an aborted child whose heart began beating.

A few days before the video featuring O’Donnell was released, and after the video including Doe 12 was made public, Doe 12 claimed that her “use of the term ‘intact cases’ is a medical term of art that refers solely to ‘intact livers’…” However, StemExpress clearly states that the term “case” refers to one whole aborted baby: 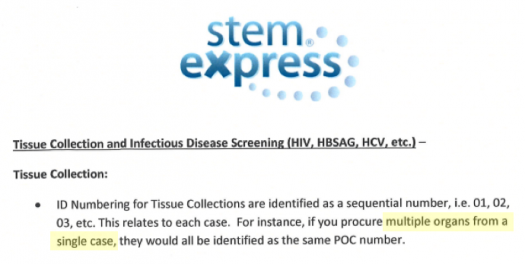 When Doe 12 took the stand on Thursday, she finally admitted that intact fetuses are procured and supplied by StemExpress for research. This admission, along with the StemExpress order above and O’Donnell’s experience, show that preborn children may be born alive to have their organs harvested — possibly while their hearts are still beating.

In addition to admitting the truth about intact aborted babies, Doe 12 testified that the StemExpress documents shown in the CMP undercover videos are in fact real, despite the fact that StemExpress lied about their authenticity to not just the public, but to Congress as well. 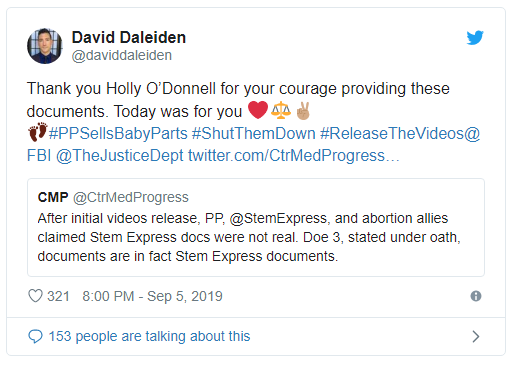 Doe 12 also claimed that her meeting with the undercover Daleiden and Merritt at a public restaurant was private and that StemExpress had given Daleiden a non-disclosure agreement before the meeting, claiming that he and she had both signed it. However, the defense then presented an email showing that the non-disclosure agreement was sent and signed nearly a month after that dinner meeting took place. Doe 12 was unable to explain this discrepancy.

Daleiden and Merritt are charged with 15 felony counts of invasion of privacy due to the videos exposing the sales of fetal body parts by Planned Parenthood. The preliminary hearing to determine if the case against them should go to trial will resume on September 10.