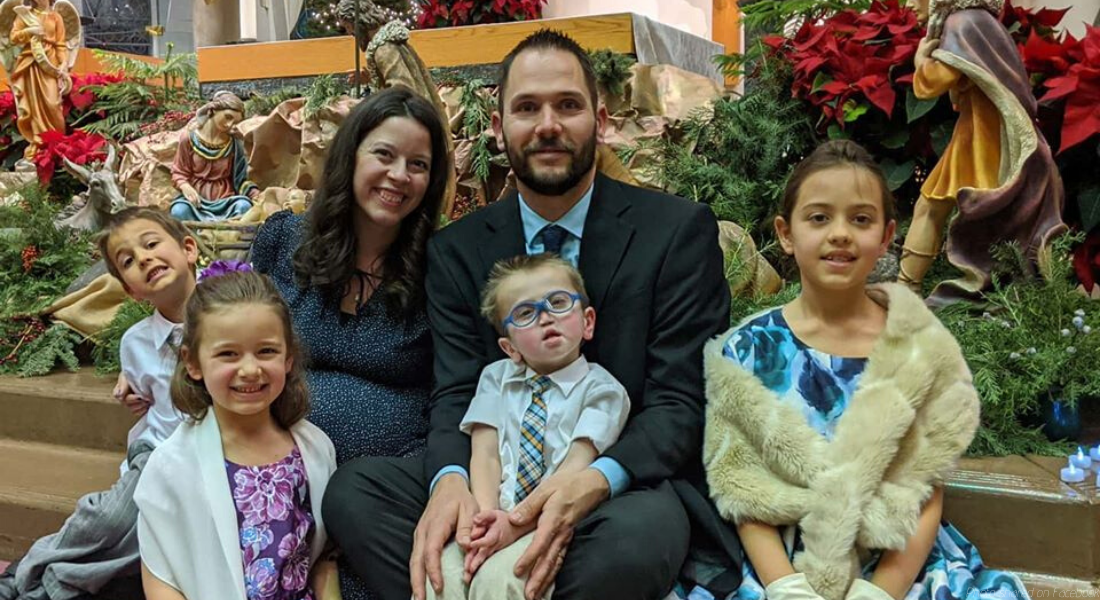 Kathryn Casey of California is no stranger to suffering. The mother of five living children, she has experienced several miscarriages, as well as the stillbirth of a baby girl with anencephaly. When an ultrasound during her pregnancy with her now four-year-old son Peter showed a cleft lip and palate, she and her husband knew that corrective surgery would be required, but had no idea that that would be only the tip of the iceberg.

At two months of age, Peter was hospitalized for failure to thrive. Casey recalled in an interview with Live Action News that he was actually below his birth weight when he was admitted. Doctors were puzzled when it eventually became clear that Peter’s body was not properly absorbing nutrients. After significant testing, the Caseys finally received a diagnosis. Peter has an extremely rare genetic condition called SPINT 2.

In his first year and a half of life, he was hospitalized sometimes “every other weekend” for one serious, even life-threatening issue after the other. Now, it’s been over a year since Peter was in the hospital. Peter requires a specialized IV catheter for IV nutrition that runs 14 hours a day, and is created by a specialty pharmacy that mails weekly batches to the Casey house. According to Casey, life is “stable, but never secure.” She also has suggestions for parents facing a new prenatal or postnatal diagnosis, as well as living and loving well when a child has special needs.

READ: School paraprofessional adopts student with special needs: ‘We are better because of him’

Remembering her emotions after her daughter’s anencephaly diagnosis and Peter’s ultrasound, Casey stressed the importance of parents being honest about how you feel. “As pro-lifers, we so emphasize the beauty and dignity of every life that we may skip over the real loss that comes with a prenatal diagnosis,” she said. “Parents can feel self-imposed suffering because of ‘shoulds,’ but it’s important to acknowledge what you’re feeling and to work through the tasks of grief. Gradually, you learn to acknowledge that your child’s life may look radically different from what you thought it should, and to let go of your expectations.”

She also emphasized the need for parents to accept the reality of loss, to process the grief and pain, and then to learn what their learning style is to best process the barrage of information that often comes after a diagnosis. Some parents need “lots and lots of information” about their child’s condition, including doing research on their own, whereas others may need to take information in bite-sized chunks only from their medical team in order to avoid being overwhelmed.

Considering Peter’s diagnosis at three months of age, Kathryn shared that a therapist “walked with me through that time” and “helped me process my feelings and thoughts versus running from them.” She also benefited from engaging in activities that involved growth or learning something new. During Peter’s hospitalizations, she started writing a book, took up watercolors, and began gardening because they allowed her to “sink my mind into something totally separate from the crisis.”

In the long-term, it means so much to Casey simply for people to ask about Peter. “Every day we face risks to Peter’s health, so the relationships we hold on to are the ones where people are able to take in both the reality of that risk and our family’s sense of normal,” she explained. A big lesson has been learning that “not everything is a crisis.” Because of Peter’s complex medical needs, they have difficulty getting a babysitter, so Kathryn and her husband don’t often attend evening activities outside the home. At the same time, she said, being Peter’s full-time caregiver is an additional role besides being his mother, and she’s learned when to step away to avoid caregiver burnout. Finally, she encouraged parents with other children to talk about their sibling’s medical issues in developmentally appropriate ways, and to be open to learning what “normal” looks like from them. Kathryn noted that her six year old regularly volunteers to get the IV pole to hook up Peter’s nutrition.

Certainly, caring for a child with special needs is not easy, but through their experience, the Casey family has learned “to embrace the present moment” as a gift. Would that we all viewed life that way.