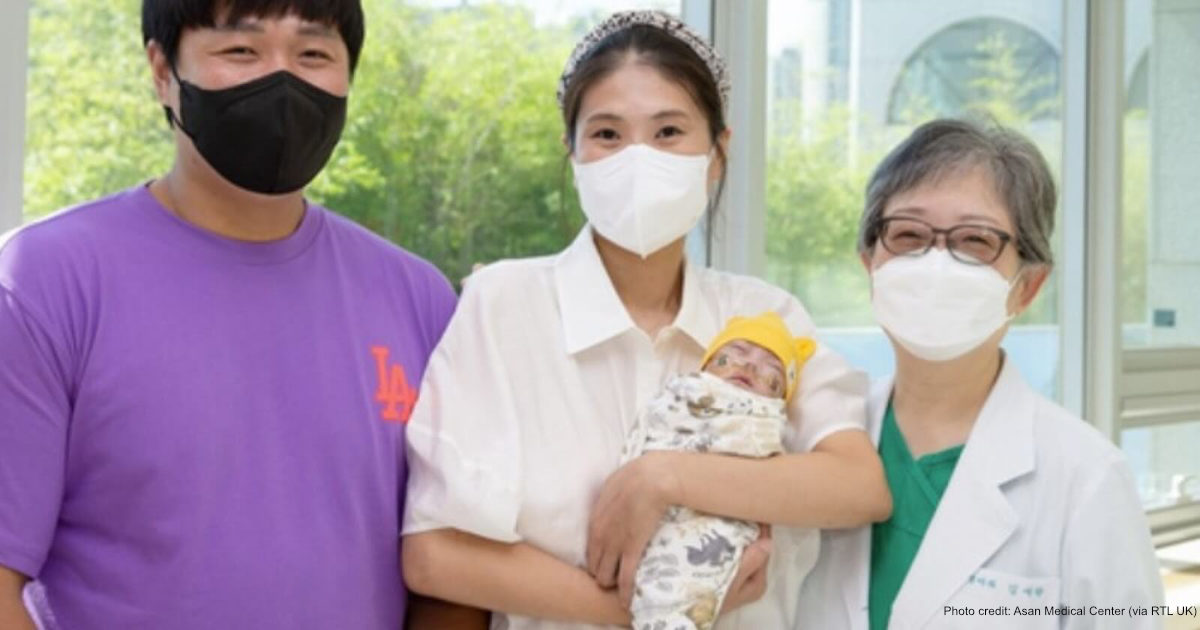 Gun-woo was born prematurely on 4 April 2021 about 15 weeks prior to his due date. At the time of birth, he was unable to breathe independently, as his lungs were not yet fully developed. His heart rate was also unstable. He weighed just one-tenth the size of an average baby, weighing in at 288 grams (10 ounces, or 0.6 pounds) and measuring in at 23.5 centimetres (9.3 inches). Experts at the hospital predicted that he had a 1 percent chance of survival.

Baby Gun-woo’s doctor, Professor Kim Ellen Ai-rhan of  Asan Medical Center’s Department of Neonatology said she was determined not just to save him but to “save him well” so that he could grow without any further health complications.

At one point, Gun-woo suffered from enteritis, a disease often experienced by premature babies, which is characterised by an inflammation of the intestines. During this, he had to be fed through a tube for a week but eventually overcame the disease.

A month after birth, Gun-woo’s heart stopped beating and he had to undergo emergency CPR.

He also endured issues such as pulmonary hypertension and retinopathy of prematurity.

READ: Preemie of the Week: Naomi, born weighing 364 grams, has inspired others to choose life

Gun-woo’s parents travelled a total of 8,700 miles in five months to help their son. Once or twice a week during these months, they would begin the almost 4-hour journey from their home in Haman, South Gyeongsang, at 3am to deliver breast milk, which the mother would pump during the car ride to the Seoul hospital where Gun-woo was being treated.

80 days after his birth, Gun-woo weighed 1 kilogram and no longer required a medical ventilator. By four and a half months, he was moved out of the incubator, and by the time he reached five months of age, he weighed more than 2 kilograms.

Gun-woo’s mother, Lee Seo-eun, 38, said: “Gun-woo is a child who came to us like a blessing, and we really wanted to protect him from any crisis”.

“We are just grateful that we’re able to hold a healthy Gun-woo in our arms thanks to the medical staff at the maternity and neonatology units at Asan Medical Center”, Lee said. “He was born the smallest, but we will raise him as the healthiest, and as a child with a big heart”.

Professor Kim said, “Gun-woo was a child who always made the neonatology staff worried and anxious, but at the same time, he was a young teacher who reminded us of the greatness and gratitude of life”.

She went on, “I’m glad, and happy to see Gun-woo completely discharged”.

Gun-woo will be listed 32nd on the University of Iowa’s Tiniest Babies Registry, a global record of premature survivors.

Born before the abortion limit

It is becoming more and more common for babies born before the abortion limit in Britain to survive. In October 2020, another severely premature baby was born in Scotland almost 2 weeks below the abortion limit. Sofia Viktoria Birina weighed only 500g, but by February this year, she was healthy enough to be sent home with her parents.

Baby Gun-woo and baby Sofia are not alone in being born so prematurely and going on to survive. A study published in the Journal of the American Medical Association in October 2019, followed 2.56 million babies born in Sweden between 1973 and 1997, around six percent of whom were born prematurely.

Researchers compared the health data of the premature babies to those that had been born at full term. They found that 55% of premature babies had no serious chronic, physical, or mental health issues by early adulthood. This is compared to 63% for babies born at full term. Additionally, with each passing decade, the odds of survival for a premature baby to adulthood have improved from about 91% of babies born in the 1970s to about 96% of those born in the 1990s.

Right To Life UK spokesperson, Catherine Robinson, said: “These wonderful stories from the UK and beyond of premature babies going on to survive are becoming almost common-place. How long will it take British lawmakers to re-examine our cruel abortion laws that permit abortion even after the point at which babies are able to survive outside of the womb?”

“Of course, babies who cannot survive outside the womb have the same dignity and worth as the babies that can, and their lives should not be ended either. But the fact that more and more premature babies are going on to survive undercuts one of the main reasons given for our current abortion law”.