A restriction on abortion based on a prenatal Down syndrome diagnosis, which was signed into law by South Dakota Governor Kristi Noem earlier this year, has officially taken effect.

Noem announced the good news on social media, explaining that multiple South Dakota pro-life laws became official on July 1, 2021. “Little Valentina Duffy is such a beautiful baby, and she happens to have Down Syndrome,” Noem wrote on Twitter. “Several pro-life bills that I signed are becoming law in South Dakota TODAY, including a ban on abortions based on a Down syndrome diagnosis. We’re protecting the right to life of all SD kids.” 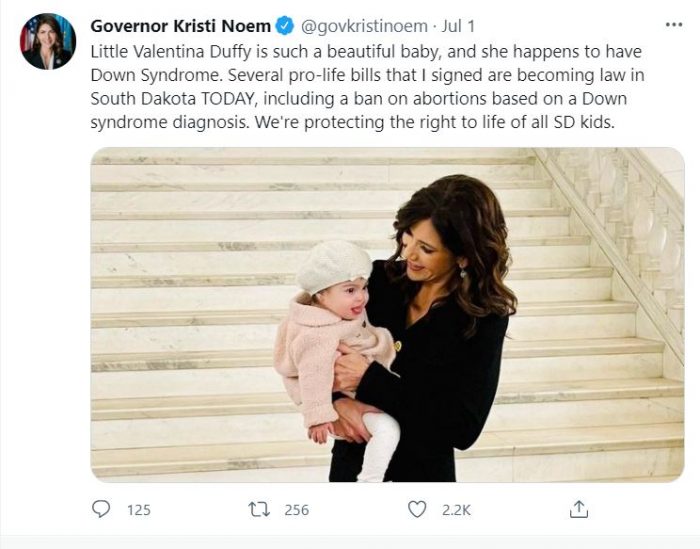 Valentina is the daughter of Rachel Campos-Duffy and former Wisconsin GOP Rep. Sean Duffy, the three of whom appeared with Noem on Fox & Friends to talk about the law. “I think little Valentina, right here — her little face shows what a blessing that she is to this family; they are going to talk to the people of South Dakota and legislators how important that bill is,” she said during the interview.

The law restricting eugenic abortions was originally proposed by Noem during her State of the State address, where she said people should be “appalled” by prenatal discrimination.

“The Declaration of Independence summarizes what we all know in our hearts to be true. God created each of us and endowed all of us with the right to life. This is true for everyone, including those with an extra chromosome,” she said. “I look forward to the day when the Supreme Court recognizes that all preborn children inherently possess this right to life, too. Until that time comes, I am asking the South Dakota legislature to pass a law that bans the abortion of a preborn child, just because that child is diagnosed with Down syndrome.”

South Dakotan Katie Shaw, who has Down syndrome, applauded the bill and argued in its favor before the South Dakota House State Affairs Committee. “Help those with Down syndrome have a chance,” she said. “Make the world more wonderful.”

Other pro-life laws which took effect Thursday include a requirement that abortionists provide standard medical treatment to babies who survive abortion attempts and a law that bans surrogacy contracts from including a provision requiring the surrogate to have an abortion under certain conditions.