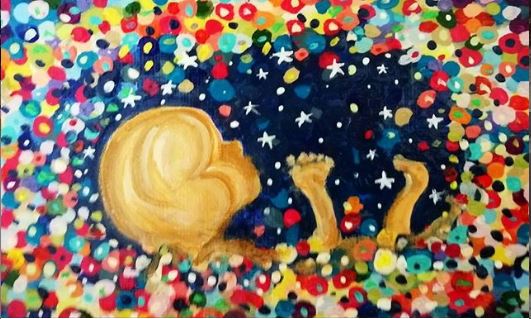 Laura Steerman of Ireland is a mother of three children and a lawyer, but now she can also call herself a professional artist. After creating paintings of her own daughter’s ultrasound images, friends began asking if she could do the same with their children’s ultrasounds. Eventually, she began getting so many inquiries that she built her art into a business called Quaintbaby Ultrasound Art.

“I began by painting my own daughter’s scans after several reduced movement scares,” she told POPSUGAR. “Each scan showed she was doing just fine despite the lack of kicks, but I felt the gray, blurry images just didn’t do her precious self justice. So I took out the paints at my kitchen table at home and got painting.”

She said that her paintings “fed the soul” and that while many people have trouble seeing ultrasound images as anything more than black and white blobs, she sees each one as a unique image.

Happy Valentine’s Day all! 😍🍰🎀🎨💞💝Meet Aziliz, a beautiful French little lady whose #babyultrasoundart painting colours were influenced by so much love and warmth surrounding her. A gorgeous present from Dad to Mum of their very special daughter, painted on a large deep mounted 16×20″ canvas with acrylics and shipped safely from me in Ireland to France #allyouneedislove #babylove 😍💞

A post shared by Quaintbaby Ultrasound Art (@quaintbaby_ultrasoundart) on Feb 14, 2019 at 1:13pm PST

“It’s emotional painting babies in the womb for families. I have met so many wonderful people who have shared their stories with me,” she explained. “No two experiences or babies are the same.”

Using sonogram image copies and the parents’ description of their preborn child’s personality, Steerman makes one-of-a-kind artwork that families can cherish forever. Babies who are described as active are painted with bold colors while calmer babies are painted in gentle pastels.

Baby Realtin, which is Irish #gaeilge for ‘Little Star’. This #babyultrasound painting was inspired by the idea of ‘A million happy heartbeats shared with Mum’, as she danced to the beat of her heart throughout her lifetime x #angelbaby #quaintbabyultrasoundart #abstractart #uniqueart

A post shared by Quaintbaby Ultrasound Art (@quaintbaby_ultrasoundart) on Nov 29, 2017 at 2:21pm PST

Steerman has also painted sonogram images of babies who were lost to miscarriage – the only artwork image that the parents will ever have of their baby. She even partners with an Irish charity that supports parents who have suffered miscarriages and is taking part in Paint Your Bump Day for Maternal Mental Health Awareness. In addition, when she read about Nicole Taylor, a mother expecting identical twins who have Down syndrome, she surprised her with a beautiful painting.

But Steerman doesn’t take credit for her success. She says that it’s the subjects of her art that deserve the credit.

“That’s why the paintings have become so widely shared,” she explained. “It’s capturing memories, emotions, personalities, and parenthood in a painting. A lot of moms are stunned to remember that baby grew in their tummy and they shared this remarkable time so closely together. It’s their baby and their masterpiece.”