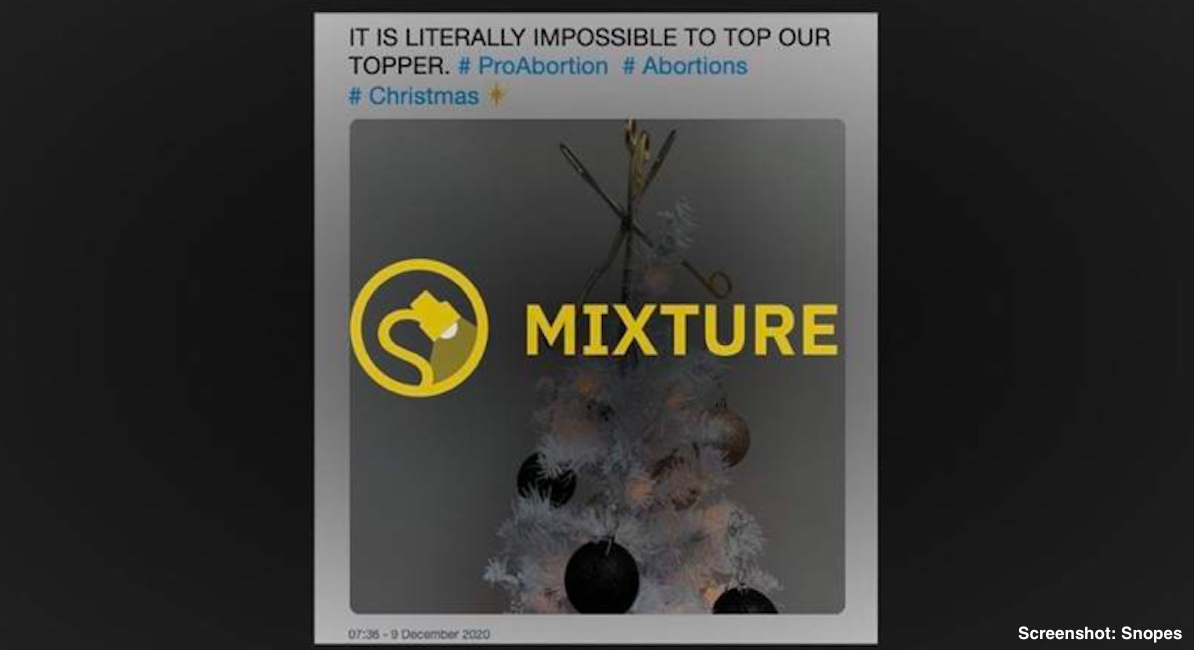 Snopes has proven its bias once again in a ridiculous “fact check” of the photo a pro-abortion advocate posted to Twitter featuring Sopher clamps (special gripping forceps used in some abortions) adorning the top of a Christmas tree. Snopes rated the media coverage of the photo to be a “mixture” of both truth and falsehoods — but its “fact check” left much to be desired in the way of facts.

An abortion advocate did, in fact, place an instrument used to dismember preborn children on top of a Christmas tree, and then posted about it on Twitter. This is a fact. But the point of Snopes’ “fact check” appeared to be more of an attempt to portray pro-lifers as overreacting and “attacking,” reducing the abortion advocate’s offensive and controversial move to a mere “Christmas decoration choice.”

While Snopes admitted that the photo was posted to Twitter by a former employee of Clinics for Abortion and Reproductive Excellence (CARE) and a “pro-abortion rights activist,” it took issue with whether or not the Christmas tree was actually in an abortion facility, which one media source had apparently claimed. “While it is fair to say a pro-abortion rights activist posted an image of forceps atop a Christmas tree, there is no proof that this photograph was taken at an abortion clinic,” said Snopes. “We thus rate this claim a ‘Mixture.'”

But Snopes also strangely took issue with Live Action News’ mention of the instruments as Sopher clamps, which Snopes referred to merely as “forceps.” 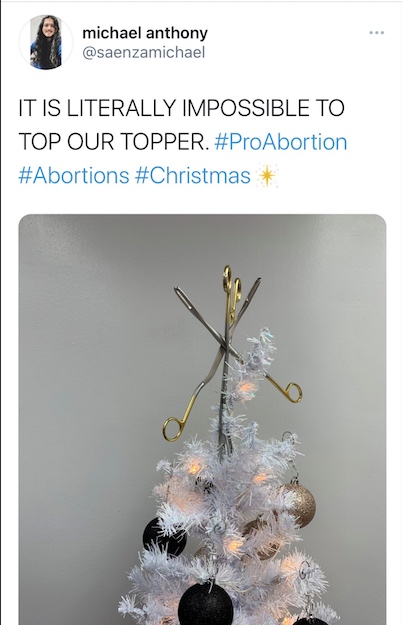 Linking to Live Action News, Snopes wrote, “The forceps are considered controversial by anti-abortion groups that claim they are used to grasp the body parts of ‘preborn babies’ and ‘tear’ their limbs. However, forceps are commonly used to remove the fetus or placenta during an abortion procedure called dilation and evacuation (D&E).”

In its seriously lacking attempt to disprove Live Action News’ statement that Sopher clamps are used to tear limbs off of the bodies of preborn children, Snopes actually did nothing but change terminology to make it sound as if Live Action News had misled readers. We didn’t. Snopes simply chose to gloss over exactly how those grasping forceps “remove the fetus” in a D&E abortion procedure.

A D&E abortion isn’t pretty. Live Action News described the procedure accurately. Listen to this former abortionist for yourself:

In the video, former abortionist Dr. Anthony Levatino states what a Sopher clamp is used for:

This is a grasping instrument. When it gets ahold of something it does not let go. The abortionist uses this clamp to grasp an arm or a leg. Once he has a firm grip, the abortionist pulls hard in order to tear the limb from the baby’s body. One by one, the rest of the limbs are removed, along with the intestines, the spine, and the heart and lungs.

Usually, the most difficult part of the procedure is extracting the baby’s head, which is about the size of a large plum at 20 weeks. The head is grasped and crushed. The abortionist knows he has crushed the skull when a white substance comes out of the cervix — this was the baby’s brains. The abortionist then removes skull pieces.

D&E abortions are the most common second-trimester abortion procedure, but dismemberment is still controversial. D&E abortions dismember pain-capable, often viable preborn children in the womb. By its very nature, abortion is controversial because it brutally kills a weaker human based on the desire of another.

Dr. Levatino isn’t the only abortion industry insider to speak the truth about the Sopher clamps or forceps and abortion.

I inserted my forceps into the uterus and applied them to the head of the fetus, which was still alive, since fetal injection is not done at that stage of pregnancy. I closed the forceps, crushing the skull of the fetus, and withdrew the forceps.

Guided by ultrasound the abortionist grabbed one of the fetal legs with his forceps. He clamped down hard and with a twisting and tearing motion, ripped the leg from the little body. He brought it out and threw it in the pain beside me. […]

The next time he went in, he tore off an arm with hands and little fingers! I could see the fetus on the ultrasound screen trying to get away from the forceps!

It’s shocking that anyone would celebrate this destructive and deadly instrument and the violent deaths it helps to carry out by placing it atop a Christmas tree. And it is laughable that Snopes would call itself a fact-checking site when it so blatantly attempts to shrug off and discredit those who tell the truth about abortion and its destruction.

Though Live Action News never made the claim, Snopes fact-checked the Christian Post for stating that the Christmas tree was located in an abortion facility — a reasonable assumption due to the presence of abortionists’ tools on the tree. (Surely, the average person doesn’t keep these grasping forceps in their home.) For this claim alone, Snopes rated the claim that “an abortion clinic put forceps atop their Christmas tree” a “mixture” of truth and falsehood.

An admitted abortion activist who worked for a late-term abortionist put a weapon of death on the tree and posted it publicly for the entire Twitterverse. Yes, Snopes, that really happened, regardless of where the tree was located.

Live Action News’ reporting on the Christmas tree and Sopher clamp were accurate, but Snopes didn’t search for the truth as it claims to do. Instead, it showed its own pro-abortion bias and misled its readers to cover up the ugly truth of what abortion is and how it is carried out.