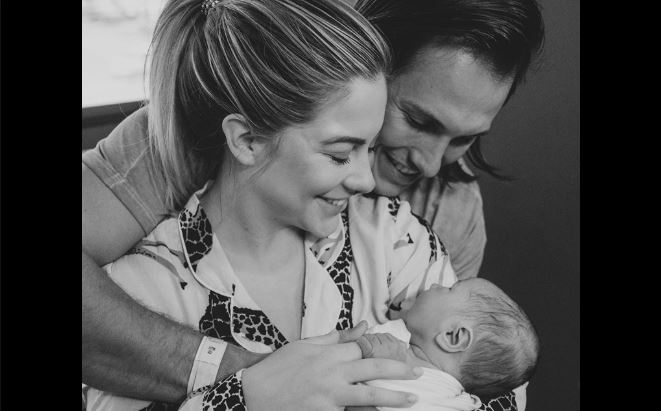 Olympic gymnast Shawn Johnson East and her husband, Andrew East, have welcomed their baby girl. The announcement, posted on their Instagram accounts, comes after the couple opened up about their struggles with a miscarriage, as well as pregnancy complications.

In 2017, Johnson East shared a video chronicling their experience with a surprise pregnancy, and then, the devastation of a miscarriage. When Johnson East told her husband to come home right away, he suspected she might be pregnant, saying in the video, “To my future kid, if you are on the way, I love you. I have no idea who you are, what you are, or what you’ll be like, but I’m pumped to meet you. Seriously…. I’m gonna be the best dad I can.” But almost immediately afterward, Johnson East began bleeding and cramping, and found out her preborn child had passed away. She said, “I have been crying more than I ever have, but am still optimistic for what is next,” and explained that they chose to be open about their pregnancy loss to help others who have likewise struggled with miscarriage.

A year and a half later, they found out they were pregnant again. Their excitement turned to fear, however, after a routine ultrasound found some potential complications, including a possibility of Down syndrome. “If our test came back and our baby had Down syndrome, we would love that baby more than anything in the entire world,” they said in a video discussing the news. “But in our hearts, as parents, as every parent out there prays and hopes, you hope for a healthy baby.”

Their baby girl, whose name has not been announced, does not have Down syndrome and was born Monday. Johnson East posted a picture on her Instagram account of the couple beaming while holding their daughter. “You are our everything,” she wrote. “Welcome to the world baby girl.”

They also created a page just for their daughter, where they shared a picture of her beautiful face, and even the account for their dog celebrated her arrival, with a picture of the baby next to him, as he sported a “big brother” bandanna. “hello tiny hooman I already ruff you very much,” the caption jokingly and lovingly read.

For his part, East posted a sweet video of the couple dancing together with their daughter, grinning and kissing, as “You Are The Best Thing” played.

Previously, Johnson East posted a picture of herself pregnant at 40 weeks while wearing her Olympic leotard, which got a lot of attention. “[F]its a little different these days,” she wrote. “But no joke… this babes is already more rewarding than any medal was.”