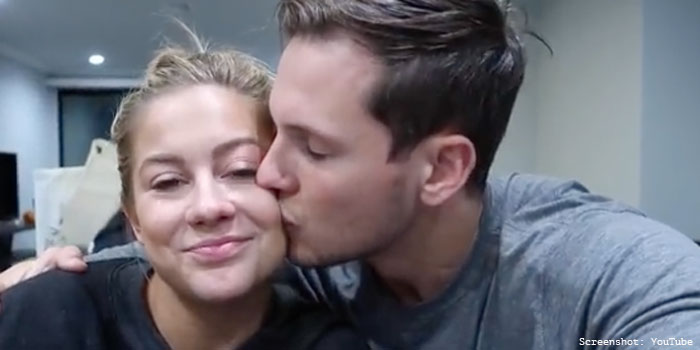 On October 21, during Pregnancy and Infant Loss Awareness Month, former Olympic gymnast Shawn Johnson East and husband Andrew opened up in a YouTube video about their recent surprise pregnancy, followed by a miscarriage.

Shawn emotionally shares her fears and excitement at the beginning of the video, when multiple pregnancy tests confirm her pregnancy. Later, the video cuts to her husband, Andrew, who says Shawn has asked him to come home right away because she has a surprise. At the time, they were in two different cities. He says on video that he suspects she might be pregnant, and goes through all of his emotions in that moment, saying, “To my future kid, if you are on the way, I love you. I have no idea who you are, what you are, or what you’ll be like, but I’m pumped to meet you. Seriously…. I’m gonna be the best dad I can….”

When he arrives home, Shawn gives Andrew a package, and opening it, he smiles. Later, we learn that she gave him a pair of Converse baby shoes to announce the happy news.

Sadly, almost immediately after the joyous scene, we learn that Shawn has begun having severe cramping and bleeding. After a phone call, she and Andrew set up a time to go and see a physician, where Shawn receives an ultrasound, and finds out that her baby has died. The doctor tells her that above all, she should not blame herself for the miscarriage.

On the video’s YouTube page, Shawn writes, “The past 48 hours have been some of the happiest, scariest, and saddest times of my life. My husband Andrew and I found out that we were unexpectedly pregnant, only to find out hours later some tragic news. I have been crying more than I ever have, but am still optimistic for what is next.”

Shawn and Andrew both posted about their loss on their Instagram pages:

“pregnancy + heartbreak”. New video is up on our YouTube page. Link in bio above. This is by far the hardest video we’ve ever posted but we felt as though it was a story that needed to be shared as so many struggle with the same thing. @andrewdeast I love you more than anything in this world and I know you are going to make the greatest Daddy in the world someday. Thank you for being my rock through all of this.

Thank you all so much for the support. @shawnjohnson your courage awes me. See the full story with link in bio #baby #marriage

In the past, other well-known people have come forward to share their stories about how miscarriage has affected them. Actress Melissa Rauch, best known for her role on The Big Bang Theory, said her miscarriage was “one of the most profound sorrows I have ever felt in my life,” which “kickstarted a primal depression that lingered in me. The image of our baby on the ultrasound monitor – without movement, without a heartbeat – after we had seen that same little heart healthy and flickering just two weeks prior completely blindsided us and haunts me to this day. I kept waiting for the sadness to lift…but it didn’t.” Rauch added that miscarriage isn’t often discussed in society, but this “doesn’t change the fact that something precious has been unexpectedly taken from your life” when it occurs.

Facebook CEO Mark Zuckerberg’s wife Priscilla suffered three miscarriages before having their daughter Maxima in 2015. Zuckerberg spoke of his feelings about the losses:

You feel so hopeful when you learn you’re going to have a child. You start imagining who they’ll become and dreaming of hopes for their future. You start making plans, and then they’re gone. It’s a lonely experience. Most people don’t discuss miscarriages because you worry your problems will distance you or reflect upon you — as if you’re defective or did something to cause this. So you struggle on your own.

READ: What a pro-life doctor saw while completing a first-trimester miscarriage

Those who suffer miscarriages are not alone. It isn’t just celebrities like Shawn and Andrew East, Melissa Rauch, and the Zuckerbergs whose stories need to be told. All who endure the miscarriage of a preborn child should be heard and allowed to grieve over their losses, and in turn, this openness and shared grief may comfort others who find themselves in the same painful situation.