A judge has recommended the revocation of the medical license of a New Jersey abortion facility chain director who is also a convicted sex offender who preyed upon vulnerable patients. Vikram Kaji is 82, and is described by The Philadelphia Inquirer as “stroke-impaired.” What’s especially notable about this recommended revocation is that Kaji is the partner of an infamous late-term abortionist Steven Brigham. The recommended revocation of Kaji’s license leaves questions of what happens to the multiple abortion facilities he owns, many of which were transferred to him by Brigham. 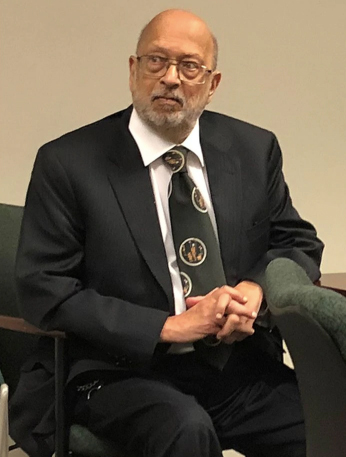 Having Kaji’s medical license revoked would be a positive thing for his patients, if his past history is any indication. Kaji has a checkered past, as Operation Rescue notes:

[Kaji] has a long history of sexually abusing his patients. Dr. Kaji was professionally disciplined by the State of New Jersey on November 1, 1993, and given a 12-month suspension for sexually abusing three patients and indiscriminately prescribing controlled dangerous substances. He was disciplined for having sex with one patient in his office, and for performing ‘‘improper’’ rectal and breast exams on two other patients. According to a consent order, Dr. Kaji knew the woman he had sex with suffered from severe depression, had been sexually abused as a child, and had once been hospitalized for psychiatric problems. He was also disciplined by the Federal Drug Enforcement Agency on February 22, 1994, and made to surrender his controlled substance license. He was also disciplined by the State of Pennsylvania on December 23, 1994, and his license was suspended for 36 months.

But Brigham’s record is no better, and without Kaji at the helm, it would not be surprising to see Brigham try to find another avenue to keep his facilities running. Live Action News has reported on Brigham’s abortion facilities, noting the dangerous atmospheres, worse than most abortion facilities. In fact, his record is so tainted that Operation Rescue considers him “the worst living abortionist in America that is not currently incarcerated.” Brigham is (emphasis added) “well known for his deceptive, corners-cutting practices,” Operation Rescue notes. “In fact, Brigham’s abortion operation is so dangerous that the National Abortion Federation, an association of abortion clinics that are ironically known to be among the shoddiest, revoked his membership years ago.”

When an abortionist loses his abortion membership with an organization that exists to promote the very thing the abortionist stands for, the depth of depravity is abundantly clear: Brigham is a danger, even among his peers in the abortion industry, not only to the babies and mothers that he comes in contact with.

Brigham’s facilities fall under the banner of American Women’s Services, a chain of facilities with 14 locations in New Jersey, Virginia and Maryland. Philly.com also adds that the facility’s site “does not list a clinic in Florida and another in Washington, D.C., that records and media reports tie to Brigham.” The site does make a lot of claims, however, in its “credentials” section, at least in ambiguous terms (emphasis added):

All of our offices are either accredited, licensed, registered, or certified by at least one of the agencies listed below, and all of our Ob/Gyn and Anesthesiologist physicians are either Board-Certified or Board-Eligible, helping our patients to know that they will receive safe medical care and a high level of professionalism.

Our mission is to provide safe medical care in a kind, caring, compassionate atmosphere, while fully complying with all applicable standards, guidelines, statutes, and regulations.

We diligently adhere to our own strict internal standards, including our policies designed to protect patient privacy and confidentiality. 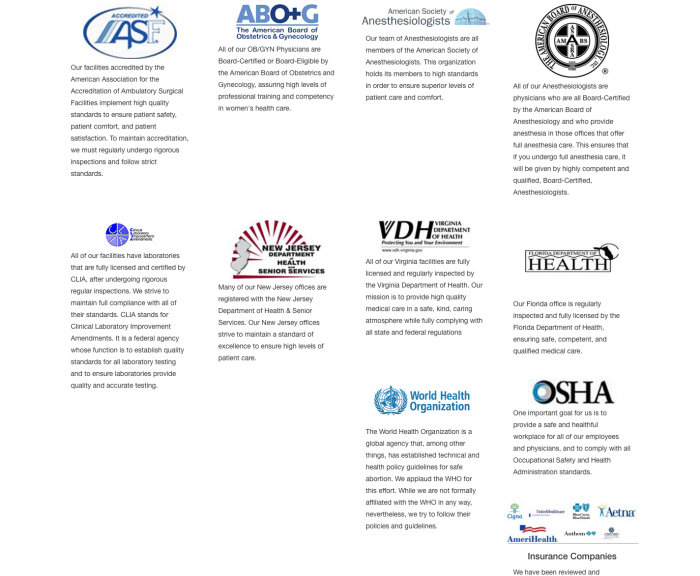 This language, in other words, reveals that essentially, these facilities are unaccountable.

Maybe patients will get a licensed office or maybe not. And a board certification is far different from a certification in an abortion method or a type of treatment or something else. Throwing around terms without specifics doesn’t sound very assuring. Having a mission doesn’t mean they fulfill it; based on the mass evidence of wrongdoing and problems and injuries to women in these facilities, this mission may have failed. Finally, there’s no assurance or comfort in anyone adhering to internal and unaccountable “standards.” What are they? Standards that are not consistent with the medical industry and patient quality in every medical facility are not really worth anyone’s assurance.

Too many times, abortion advocates cry foul at regulations that insist on medical quality assurance, commonsense procedures such as waiting periods for surgery, admitting privileges at hospitals in case of unanticipated problems, and other normal standards. When these are eschewed so abortion is not restricted, we end up with the Kajis and Brighams of the abortion industry.

While these facilities hang in the balance if Kaji’s license is ultimately revoked as recommended, for once pro-lifers and abortion advocates are on the same page:

“We hope the decision will bring Mr. Brigham’s charade one step closer to being shut down permanently,” emailed the Very Rev. Katherine Ragsdale, interim CEO and president of the National Abortion Federation. “Brigham is a rogue doctor who operates outside recognized standards for quality abortion care.”