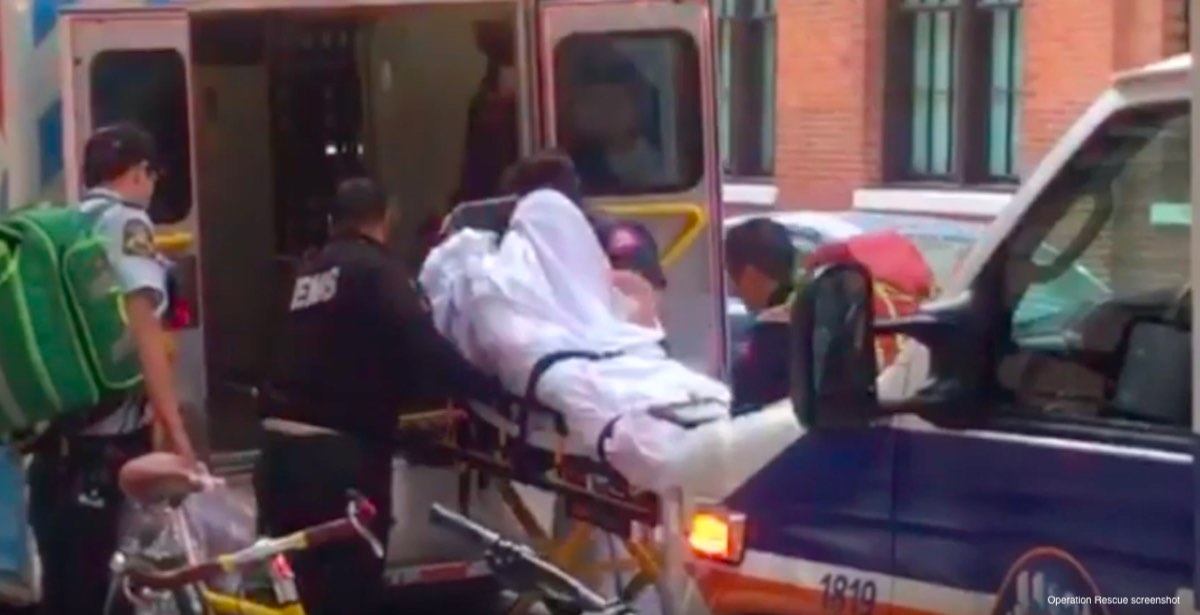 Operation Rescue has reported that yet another woman was transported by ambulance from New York City’s Margaret Sanger Center Planned Parenthood on June 7. This marks the seventh woman transported in just 16 weeks from this dangerous abortion facility.

Pro-life activists praying at the scene obtained photographs and video footage of a woman being loaded into an ambulance after coming out of the facility. Two ambulances were called to the scene to assist the woman, a trend which Operation Rescue has noticed with increasing regularity. The organization previously surmised that the Sanger Center may be attempting a workaround of the 911-system, resulting in confusion with multiple ambulances dispatched for one patient. Bypassing the 911-exchange would mean that there were no public records of the ambulance dispatch.

This Planned Parenthood is also notoriously difficult for those who are suffering from a medical emergency. Medical gurneys can’t fit in the building’s elevator, so emergency personnel must transport injured patients in wheelchairs to get them out of the building. It is surmised that those patients with more serious injuries are then transferred to gurneys, as was the case in the latest incident. Despite the alarming number of medical emergencies at this building, the abortion corporation fights changes which would require them to incorporate a safer exit within the building. In an emergency incident in which time is of the essence, the delay required to transport injured women out of the Sanger Center is unconscionable.

Of the recent incidents at this location, at least six of the seven women were Black; the seventh was completely covered with a sheet, so her ethnicity is unknown.

Since February 16, Operation Rescue has noted seven women transported by ambulance from this facility. This is an alarming increase in medical emergencies from this location, as last year pro-lifers documented only three ambulance calls in the entire year. Some have surmised that this dramatic uptick may be the disastrous result of New York’s Reproductive Health Act, which removes abortion restrictions and allows non-physicians to commit abortions.

“The Margaret Sanger Planned Parenthood is a very dangerous place for women and their unborn babies. This abortion facility cranks out botched abortions at a very troubling rate,” said Troy Newman, President of Operation Rescue. “A full investigation into patient care and safety practices should be conducted, but given it is New York, any investigation there is likely to be done with a blindfold when it comes to Planned Parenthood.”