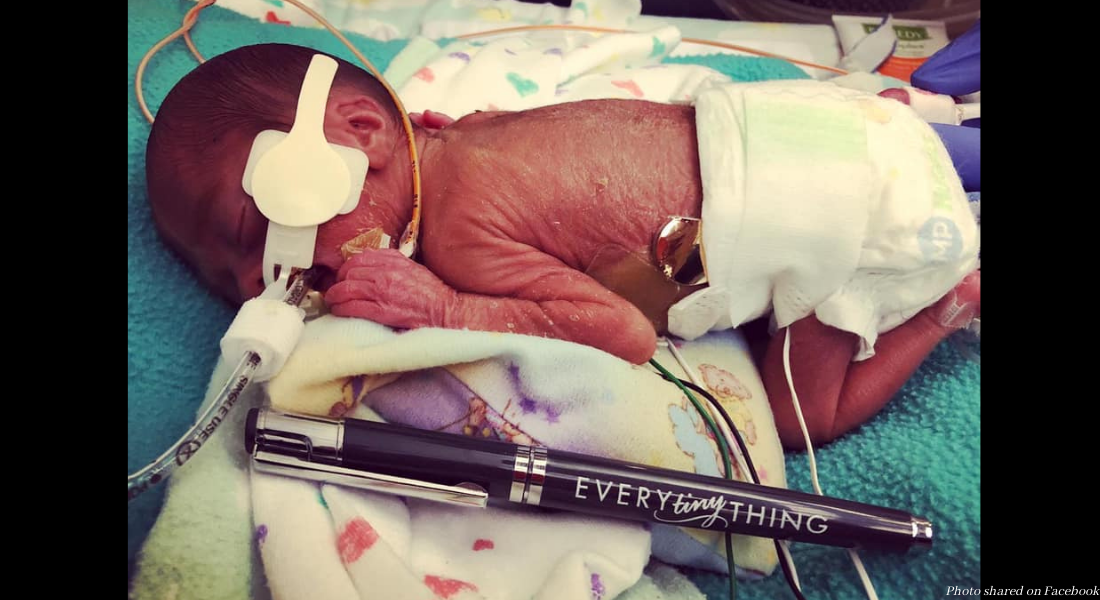 For most parents, there is no sacrifice too great for their child. And one Oregon family is giving up their entire lives to move across the country so their micropreemie can have a better chance at life.

Amelie Grace Bacuyani was born in November, 17 weeks early and weighing just 1 lb., 4 oz., officially classifying her as a micropreemie. After her mother, Angie Bacuyani, faced pregnancy complications, doctors told her that Amelie wasn’t likely to survive past 23 weeks gestation — just a 10% survival rate. But after she was born at 23 weeks, her chances of survival grew.

“When I first saw her, I was super surprised how perfect she looked,” Bacuyani told KTVZ. “I feel like every single miracle has just happened before my eyes.” Though Amelie has been able to overcome problems with her heart, kidneys, intestines, eyes, brain, and more, she’s continued to struggle with her lungs. She was eventually diagnosed with a chronic lung disease called bronchopulmonary dysplasia (BPD). It most commonly affects premature infants and prevents them from breathing properly. Typically, babies with BPD are able to recover, but it’s known to lead to long-term difficulties with breathing — so the Bacuyani family is taking drastic action.

They’re selling everything they own and moving thousands of miles across the country so Amelie can receive care at Nationwide Children’s Hospital in Columbus, Ohio, where babies with BPD have a higher survival rate.

Though Amelie has been growing stronger every day, it hasn’t been an easy journey so far. According to the family’s GoFundMe page, they’re already facing over $1.3 million in medical bills, and that debt is steadily increasing. Once Amelie is admitted to Nationwide Children’s Hospital, she’s expected to be there for at least six months, but possibly for as long as two years. The family also has moving expenses to contend with, and the pain of being separated for so long.

Bacuyani has been able to live in the Ronald McDonald House so she can be close to Amelie at all times. But their other children — Hudson, Micah, and Bentley — aren’t permitted to stay at the Ronald McDonald House due to the COVID-19 pandemic, and won’t be able to stay at the Ohio location, either. The three proud big brothers haven’t even been able to meet their little sister. “Feeling like my heart is torn between my kids at home and her in the hospital, and wanting to be at two places at once,” she said. “Probably the first few weeks, [one of Amelie’s brothers] kept asking if she was going to die, and that was hard. I know he was thinking about that and worried about that.”

This means the family will need to find new employment, new housing, and find a way to feed their children — all while caring for a premature baby. But for them, it’s all worth it. “It’s our baby girl,” Bacuyani said. “If you have a child, you know you’d just do anything for your child.”

The age of viability is often said to be 24 weeks gestation, one week further along than Amelie was. Yet children are surviving at younger and younger ages, with a 2016 study in the Journal of the American Medical Association (JAMA) Pediatrics reporting that up to 71% of preemies can survive if they are given active care, instead of just palliative care. Though these babies are fragile, they are increasingly able to survive if given the chance. And for parents of preemies, it’s worth the fight.

“She’s priceless,” Bacuyani said to KTVZ of Amelie, her little miracle baby. “She means the world to me.”