Seattle-area Eastlake High School is known for being controversial. According to talk show host Jason Rantz, the school has employed teachers who have put up posters “decrying capitalism as a ‘death cult,’ demanding an end to borders, and supporting Black Lives Matter.” Shila Hodgins, who teaches humanities at Eastlake, has publicly admitted that Eastlake teachers “always bring in our politics.”

But Eastlake teachers Jason Wessels and Michelle Okroy may have gone too far.

The two science teachers are faculty advisers for a school program called Link Crew, which connects junior- and senior-class student mentors with incoming freshmen as a means of helping the latter adjust to the novel demands of high school. Student mentors are understandably expected to be “kind, responsible, a positive role model, [and have] blossoming leadership qualities.” But Wessels and Okroy tacked on additional, agenda-driven criteria, demanding that students pledge their support to left-wing ideas and groups or they cannot participate in the mentoring program. 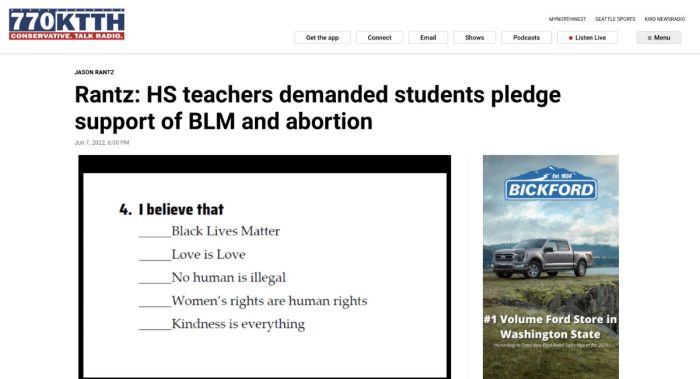 Parents were sent a Code of Conduct, which students must agree to follow. Students who do not follow through are removed from the program. Most of the items on the Code of Conduct are non-controversial and sensible – for example, students agree to “be positive role models, curtail bullying, and display a positive school attitude.”

However, the fourth category on the list included a politically motivated checklist, which students were expected to initial as a sign of their agreement. The following statements were included on the list: “Black Lives Matter, Love is Love, No human is illegal, Women’s rights are human rights.”

Taken at face value, these statements may seem inoffensive. But these are slogans used by people pushing a leftist agenda. “Women’s rights are human rights,” in particular, has been co-opted by the pro-abortion movement. None of these slogans has anything to do with mentoring younger schoolmates, and it is unacceptable that students be required to support any political agenda in order to participate in a public school program.

With public schools increasingly resembling indoctrination factories, it is little wonder that an increasing number of families are choosing to homeschool. According to the National Home Education Research Institute, the homeschooling population was growing at about 2-8% per year, until the academic years 2019-2020 and 2020-2021, when the numbers increased dramatically. As of 2021, 6-7% of school-aged children are homeschooled.