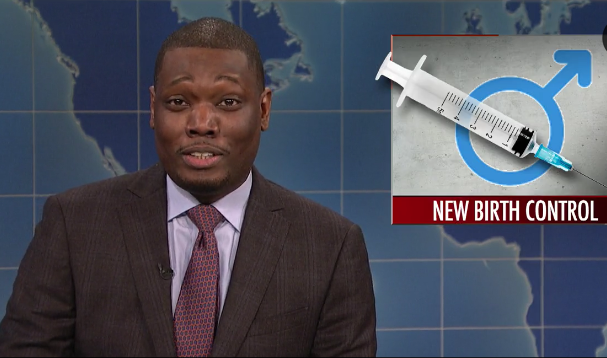 But despite its pro-abortion stance communicated in sketches and Weekend Update segments, SNL has been known to acknowledge the humanity of the preborn — accidentally.

This admission came last season when discussing the hypothetical of whether or not to abort Baby Hitler. More recently, on the November 5th episode, co-host Michael Che discussed how men have dropped out of male birth control studies due to experiencing side effects.

Che then quickly segued to women and their “reproductive rights” with his commentary (emphasis added):

See, this is why women should be in full control of all reproductive rights. Men are not going to take birth control because pregnancy just doesn’t affect our bodies. When a woman gets pregnant she has to decide whether or not she wants a human being to grow inside of her.

Meanwhile, I get nine months to decide whether to buy a stroller, or a bus ticket. It’s usually the stroller. Men wouldn’t care about side effects, if it did something good for us…

Whoops! Che fully admitted that the preborn child is a growing human being. This is a concept that some abortion advocates believe women get to decide (as if biology were subjective), and some (but not all) deny altogether. If what a woman is pregnant with is a human being, then abortion can easily be looked upon as murder, and murder is not only acknowledged as wrong in our society, but as illegal.

Saturday Night Live, even though heavily pro-abortion, let the truth slip on this one. Pro-life is pro-science. The preborn child in utero has a heartbeat very early in pregnancy, with new studies showing that it may begin at 16 days after conception, before a woman even knows she is pregnant. He also has DNA, which is unique and distinct from his mother and father, from the moment of conception. What is growing inside the womb is, as SNL admitted, “a human being.”

One thing Saturday Night Live doesn’t seem to have learned yet, after years and years of failed jokes and sketches, is that abortion just isn’t funny — because whether some choose to deny it or not, abortion kills human beings.