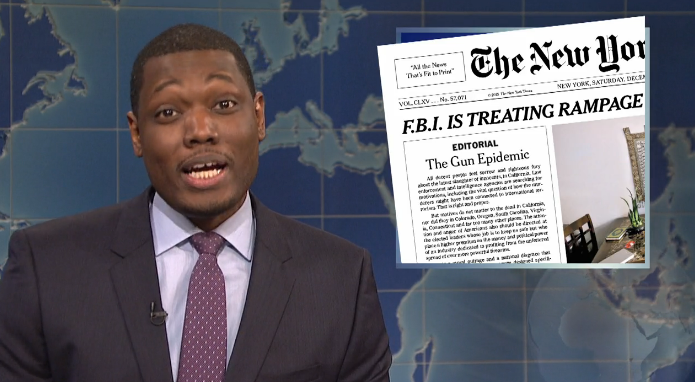 In a historic move last week, the U.S. Senate voted to defund Planned Parenthood. Saturday Night Live was none too pleased about the move, especially because as they see it, the country ought to have other priorities – namely gun control.

The show’s Weekend Update segment features a bit of news followed by jokes – some desperate, and some merely giving a chance for the host to insert his own opinion. Host Michael Che’s rant is certainly an example of the latter…

There have been more mass shootings in the U.S. this year than there have been days in the year. So how is defunding Planned Parenthood the priority right now?

It would be like if you called an exterminator and he goes “Whoa, you got a lot of rats in here, man! So the first thing we got to do is defund Planned Parenthood!”

No, it’s actually nothing like that. Even if Che’s “joke” had been a good one, abortion and gun control are two separate issues. Except one thing is clear: if we want to save human lives, then defunding Planned Parenthood should absolutely be a “priority right now.”

The U.S. Senate doesn’t exist to merely vote on and pass laws that Che or The New York Times thinks it should. Discontinuing taxpayer funding to Planned Parenthood isn’t just a priority now – it has been a priority for a long time, reigniting this summer in light of the scandal surrounding Planned Parenthood’s sale of aborted fetal body parts and willingness to illegally alter abortion procedures to obtain those parts. This is simply the first time the vote has been successful in the Senate.

It’s also worth pointing out that the statistic Che refers to – the amount of mass shootings claimed by media outlets (355) – is in dispute. Even if we accept that there have been 355 mass shootings, the number of abortion deaths far exceed the number of deaths from gun violence. Planned Parenthood, whom Che is defending, is the nation’s largest abortion provider, though by no means the only one. If we go by Planned Parenthood’s own figures from the latest annual report (2013-2014), we get 327,653 abortions.

Pro-lifers believe that all lives are precious, and thus both the preborn child killed from abortion and the born person killed from a shooting are tragic acts that should be addressed.

This is just another case of abortion proponents becoming selectively disturbed by killing. To them, the hundreds of preborn children silently killed every day in the womb by their beloved Planned Parenthood just don’t count.