Last month, the Satanic Temple filed a motion seeking to have Justice Amy Coney Barrett recused from its case challenging a Missouri abortion law. And despite the group’s claims that Barrett could not remain impartial in the case, the Supreme Court dismissed the group’s motion.

For years, the Satanic Temple (TST) has attempted to do away with pro-life laws in Missouri. A lawsuit filed by the Satanic Temple seeking to overturn Missouri’s 72-hour waiting period was dismissed in 2018 by the Eighth Circuit Court, and the Temple is now seeking for the Supreme Court to intervene. According to the plaintiff in the case, waiting periods and informed consent laws are violations of her “religious freedom.” TST has, in recent years, taken to calling abortion a “religious rite” as a way of skirting pro-life laws.

Complaining that Barrett is openly pro-life, the organization claimed she would not be able to remain impartial when it comes to their case. “We would prefer Justice Barrett honor her promise to the American people by recusing herself from TST’s case because she is clearly hostile to TST’s view that a fetus is not a human being,” Lucien Greaves, co-founder and spokesperson for TST, said in a statement. “But if she does not do so, we are asking the Supreme Court to enforce the law and disqualify her because established legal precedent requires it.”

The Missouri Attorney General, Eric Schmitt, responded to the lawsuit by defending religious liberty in the face of TST’s attack, which Schmitt pointed out was based solely on Barrett’s religious beliefs. This was obvious in the motion itself, in which TST acknowledged that Barrett is able to be fair and impartial. The problem for TST is her religious beliefs, which is ironic, considering TST is arguing for abortion based on its idea of religious freedom (emphasis):

Petitioner concedes that Justice Barrett can rule fairly and impartially in this case, or in any other case involving abortion, however directly or tangentially. There is no objective basis for disqualification.

… In essence, Petitioner contends that any Justice with strong personal or religious views on abortion cannot participate in a case related to abortion. The implications of this argument are staggering.” [Cheney.] Every Justice undoubtedly has strong personal views on many policy issues—none is “a complete tabula rasa.” [Laird.] “Even one unnecessary recusal impairs the functioning of the Court.” [Cheney.] To require routine recusals of members of this Court in innumerable cases would undermine the Court’s ability to function.”

Yet the Supreme Court refused, and Barrett will remain when the case is heard. “We cited numerous examples in our motion that unequivocally display Justice Barrett’s hostility towards the act of terminating a pregnancy. Yet, the Supreme Court refused to recognize that her dogmatic conclusions related to abortion, which she announced publicly, can reasonably affect her ability to impartially rule on our religious freedom claims,” Greaves complained in a second statement, adding, “When the Supreme Court considers if they will hear our abortion case in conference on November 20, we hope for the sake of upholding fair and impartial jurisprudence that they will make decisions justified by established legal precedence.” 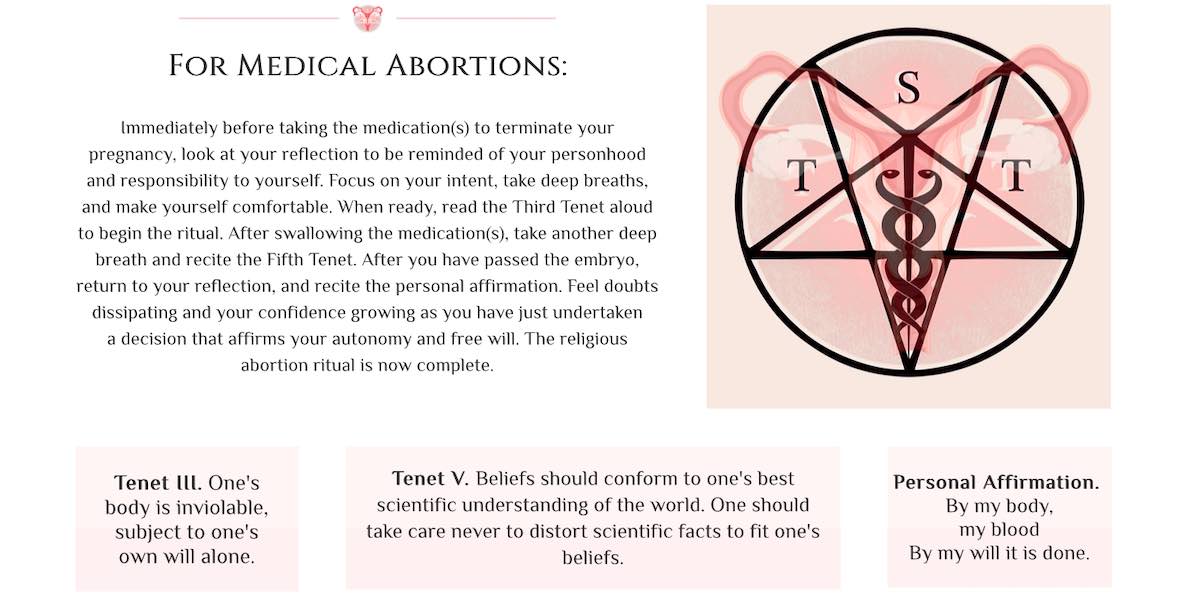 TST, in addition to claiming abortion is a religious rite, also raffled off an abortion earlier this year as part of a fundraising campaign. As for the group’s abortion “ritual,” it consists of making affirmations in front of a mirror, before and after the procedure.

The tenets of TST play a role in the group’s abortion “ritual,” yet those tenets also reveal the weakness of the group’s beliefs. The Third Tenet states that “[o]ne’s body is inviolable, subject to one’s own will alone,” while the Fifth Tenet declares that “[b]eliefs should conform to one’s best scientific understanding of the world. One should take care never to distort scientific facts to fit one’s beliefs.” Yet a preborn child is not part of his mother’s body. She is a distinct, unique human being, who has her own DNA, and is alive and growing. This not mere religious belief, but scientific fact.

For many in the pro-life movement, the opposition to abortion is based on science, not religious belief. TST is seemingly insistent on framing the debate as a religious one, perhaps because it is aware that its argument fails on a scientific basis.