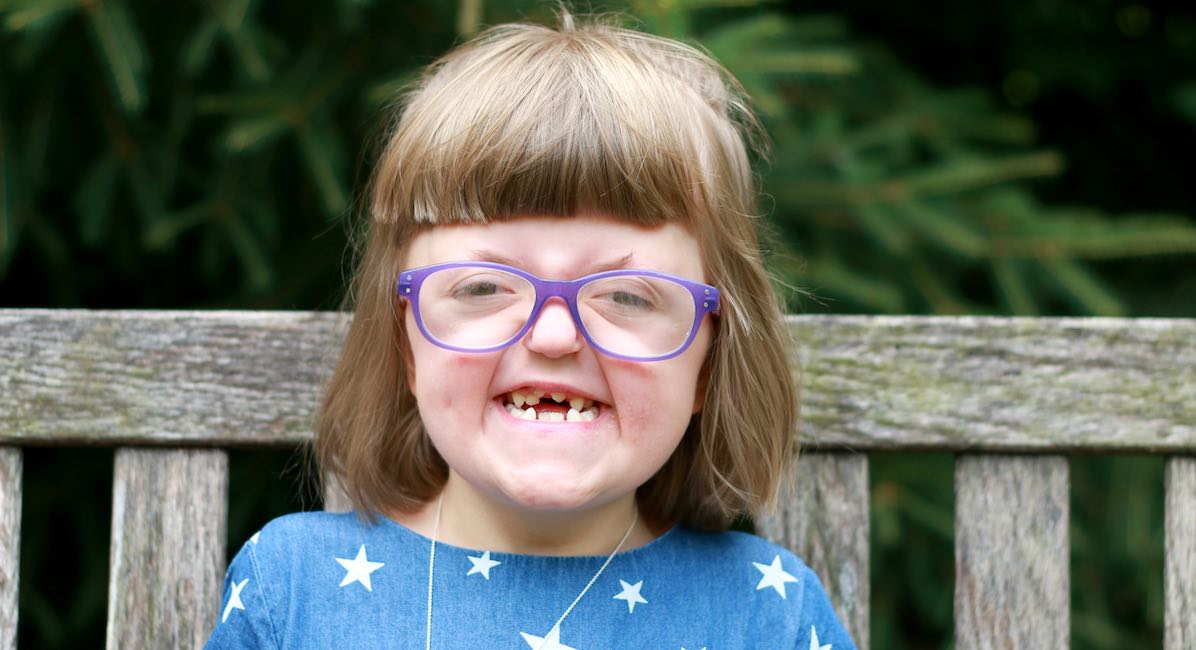 When Jeannie Ewing‘s seven-year-old daughter, Sarah, was born, everyone was shocked. She was born with unexpected facial differences due to a rare genetic syndrome. Ewing and her husband already had one healthy daughter at home.

“My pregnancy with Sarah was normal. All ultrasounds were normal. She did measure a little big, and the doctor was kind of concerned,” Ewing, who lives in Indiana, told Live Action News in an interview. Sarah was born via Cesarean section after 24 hours of labor, and Jeannie recalled that “everyone fell silent” in the operating room after she was delivered.

The delivering physician eventually told Jeannie, “Sarah looks like she’ll need some corrective surgeries,” and asked whether there were any known genetic issues in the family. There were not. After a “flurry of activity” examining Sarah for breathing and heart problems, Jeannie held her for the first time hours later in the recovery room.

The OB/GYN that delivered Sarah came to check on them both, and told Ewing something that has stayed with her to this day. The woman, who was not Ewing’s regular doctor and who had no idea that Ewing was a devout pro-life Catholic, told her, “I just want you to know that I’ll never forget this day for the rest of my life” because of “the way that you and your husband responded with love” at the news that Sarah had obvious physical differences.

Sadly familiar with cases of parents abandoning children born unexpectedly with significant medical needs, the doctor was amazed at the Ewings’ openness to Sarah just as she was. She went on to tell Ewing, “Your daughter is a special chosen child of God and she has a very special purpose in this world.” 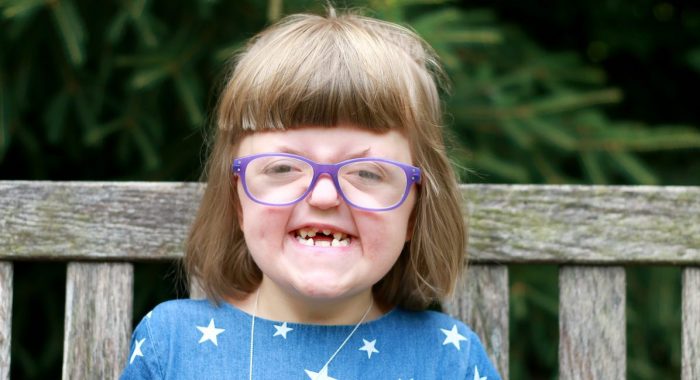 After various diagnostic tests, Sarah received a diagnosis of Apert syndrome, a rare genetic condition characterized by “the premature closure of the bones of the skull (craniosynostosis).”  According to the National Institutes of Health, “This early fusion prevents the skull from growing normally and affects the shape of the head and face. In addition, a varied number of fingers and toes are fused together (syndactyly).” One in 65,000 to 88,000 children will be born with Apert syndrome.

Ewing said that “Apert is a very nuanced, complex condition,” in which physical and cognitive manifestations are on a spectrum, and each child is different. Cognitive impairment can range from none to moderate. “On average, a child with Apert will have anywhere between 20 and 60 corrective surgeries in their life,” depending on whether abnormal fusions occur other places in the body besides the skull and hands and feet, Ewing told Live Action News. Dental, breathing, and eye problems are also common.

Now seven years old, Sarah has had eight surgeries so far. “She’s able to get dressed on her own, and to feed herself. She is verbal, and she goes to school, where she’s able to write. She has an IQ of 70, so she is a slow learner and has an IEP (individualized education program),” said Ewing. Sarah has a team of around 15 specialists who coordinate care of “the new developmental and medical issues that come up as a children with Apert gets older,” Ewing noted.

READ: ‘There was just no question.’ Parents refused abortion for baby with craniofacial syndrome

Since Sarah’s birth, Ewing and her husband have welcomed three more children. She told Live Action News that frequently, families of children with special needs decide “after that [child with special needs] is born, they’re done.” Ewing and her husband decided instead to remain open to life, noting that the two biggest obstacles to that openness are caregiver burnout and fear.

Still, Ewing said she knew even in the operating room after Sarah’s birth, that Sarah would have younger siblings. “It was the weirdest, most surreal, and frightening time of my life, but we had this overwhelming sense that she wasn’t our last child.”

Several years later, when Sarah had not had any surgeries for about a year, Ewing and her husband conceived their third child, another daughter. Two sons have followed. Each time, Jeannie experienced both exhilaration and fear — the excitement of welcoming a new life and the fear of the possibility of their child having disabilities. Still, Ewing and her husband have found that “something powerful happens when your hope is greater than your fear. I think that that carried me.” 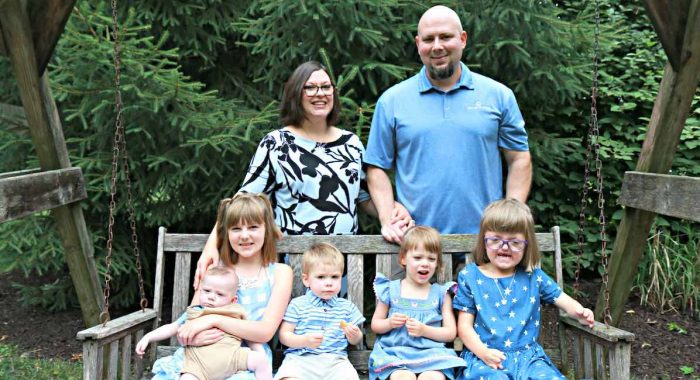 Having a large family as well as a child with significant medical needs has impacted Ewing’s understanding of what it means to be pro-life. Ewing believes that “people who are pro-life need to be invested in families. We want people to be open to life, and we need to be willing and ready to support those families. Certainly, being pro-life still means ‘no’ to abortion, contraception, and sterilization.”

She hopes that fellow pro-lifers will also understand that families who have chosen life need continued support as they raise their children. “We need to look at the health of families, supporting moms when they are struggling with the burden of care. We need to offer material support to large families who don’t have good family support systems, and help them find adequate child care” so that the parents can have some respite in order to “be present to all of our children.” 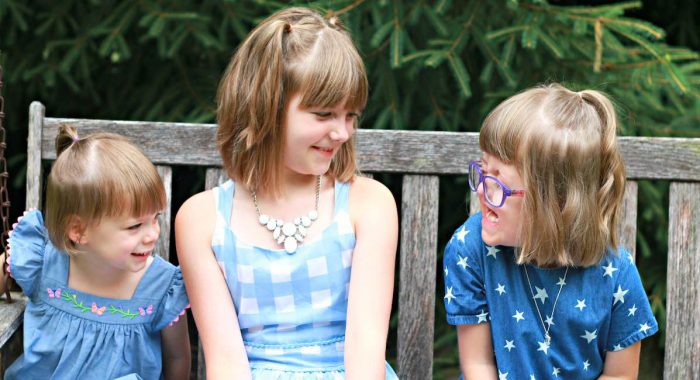 In April, Ewing reflected on how having a child with Apert influenced her response to the COVID-19 pandemic. At that time, Jeannie, who has a degree in counseling and has written extensively about grief, redemptive suffering, and waiting, wrote:

1. There is very little of life we can control. What we can do, we must try with our best effort and let go of the rest – truly let go.

2. All good and terrible things have a beginning and an ending. For the good, hold on to the beginning. For the terrible, look to its ending.

3. Look for goodness, beauty, and truth. If you can’t find the good and beautiful, create it. But never stop searching for truth.

4. Life and death are really two sides to the same coin. If you can learn to appreciate life, you can also learn to respect death. Both can be ugly. Both can be beautiful. We have the power to decide which we’d rather have. A beautiful life often leads to a beautiful death.

Ewing encouraged parents who receive a poor diagnosis for a child inside or outside the womb, “You don’t have to have all the answers to ‘Why? How? What if?’, but in order to find healing, try to live within the questions.” She added, “We’re all supposed to be co-creators with God [in the conception of our children], so create joy.”

“Look for the good, and be open to learning from grief and pain,” Ewing said. “I can see now why the world needs Sarah.”