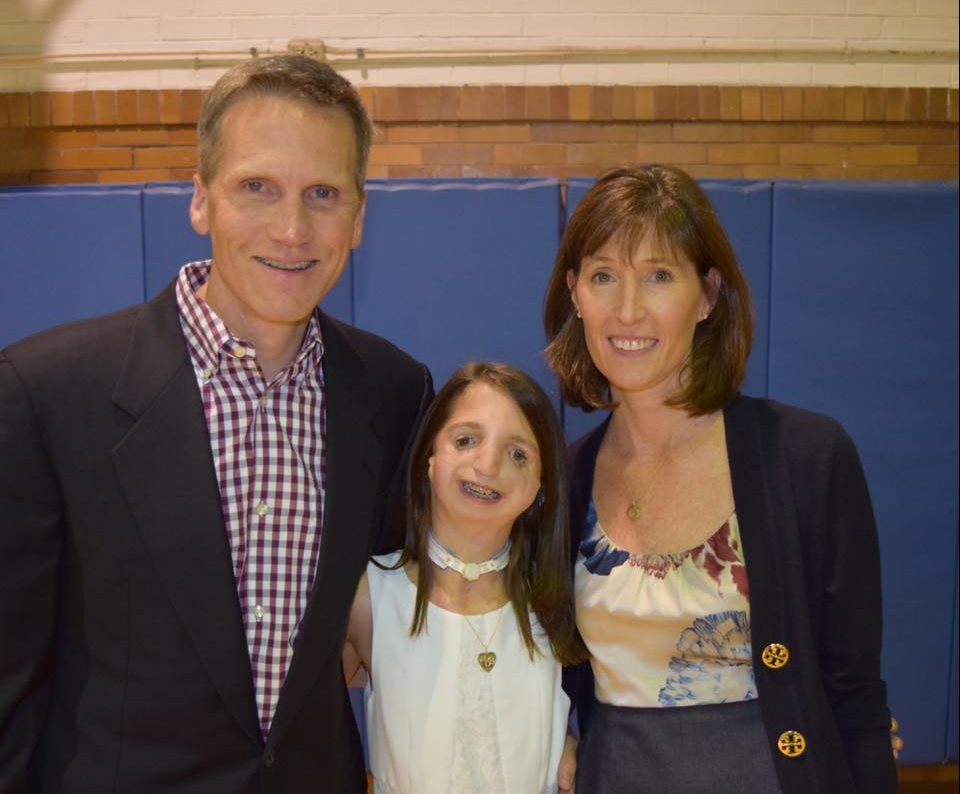 When Eric and Janet Beatty learned that their preborn baby girl Clara had Treacher Collins syndrome, doctors advised them to abort. The American couple was living in Belgium at the time, where it was extremely rare for a child to be born with the condition because, according to the Daily News, most parents choose abortion over life. But the couple refused to abort their baby and eventually moved back to the United States.

Made famous by the novel and film “Wonder,” Treacher Collins syndrome is a genetic condition that affects the development of the face — including the cheekbones, jaws, ears, and eyelids. It occurs in one out of every 50,000 new births worldwide. Facial features are what leads to the diagnosis of newborns – including droopy eyes, small cheekbones, and a tiny jaw but there are varying degrees of severity with the condition. Restricted ear canals lead to difficulty hearing, and some children need a breathing tube in order to survive. Few children, like Clara, are diagnosed in the womb when facial features are distinguishable on ultrasounds. In these instances, parents are often advised that death by abortion is a compassionate choice, but that made little sense to the Beattys.

“There was just no question,” Janet Beatty told the Daily News of their decision to choose life for their daughter.

“It was kind of strange sometimes with the doctors, some of who I think really, really questioned why we had this baby,” added Eric Beatty.

Clara had difficulty with feeding and breathing and required around the clock care for the first three years of her life, but in most ways, she was like any other child, and at age nine was tired of people acting like she was different.

“I want to try to make myself as much like the other kids, so that I can stop having everyone asking me questions… because it gets so annoying,” she said.

READ: Baby’s birth mother decides to keep her after adoptive mother rejects her

Jono Lancaster has been vocal about life with Treacher Collins and his difficulty deciding whether or not to have children. His own parents placed him for adoption after his birth and he was adopted by his foster mother who took one look at him and felt nothing but love.

“I’ve always dreamed of being a daddy,” Lancaster told BBC. “I crave father and son moments – my adoptive mum was absolutely amazing but I never had a father figure in my life, and that’s something I really, really want. I want to do the school run, take my child to dance, gymnastics or football – whatever they want.”

In 2011 he discussed the idea of becoming a father naturally, through adoption, or through in-vitro fertilization with preimplantation genetic diagnosis (PGD) to determine if any of the embryos have Treacher Collins. When PGD is used, embryos with a diagnosis are destroyed. Lancaster struggled with this, and said he would never abort a baby with the condition, but was unsure if he should use PGD to essentially weed out any of the embryos who tested positive for Treacher Collins.

“When I first hear of IVF PGD I had this kind of moral dilemma going on in my head, that if my parents had chosen to do it, I wouldn’t be here today,” he said. “Then there are all these other amazing people in the world with genetic disorders, I think the world is a better place because they are in it. I’d feel in some way like I’m insulting or disrespecting them, and that’s what I’m struggling with.”

Using IVF and PGD in order to purposefully destroy embryos who are diagnosed with a genetic condition like Treacher Collins is the equivalent of abortion. Human lives are created only to be destroyed if they don’t measure up to the standards of those creating them. It’s an example of the eugenic mindset that exists in our society – hidden in plain sight under the guise of compassion killing. No one should have the power to decide that another human being’s life isn’t worth living. To do so is to assume that this person is nothing more than their diagnosis and to deny all of the other pieces of them that make them who they are.

Cynthia Murphy is a model with Treacher Collins syndrome who overcame a tough childhood of bullying to become the confident person she is today. Once laughed out of an America’s Next Top Model audition, she dedicates her life to helping other people with craniofacial conditions.

“I believe God made you beautiful just the way you are, and if you master your inner self and physical health by thinking and eating healthy, your mindset can completely change,” said Murphy. “You have talents, and by failing to recognize and honor them, you may be missing out on grand life opportunities.”

Missing out – that’s what happens with abortion and IVF with PGD. Not only are children denied the chance to live their lives because of a health diagnosis that is only a portion of what makes them who they are, but parents are denied the chance to love their own children because society has told them that children with health conditions are better off dead.

As for Clara, her parents always knew that she was better off alive, and allowed her to live her life to its fullest possibilities, and she does just that.

“Even when she was little, you could look at her and people would say there’s an old soul in there,” said Janet Beatty. “She just had these big eyes and you see her taking everything in. […] We’re all learning that we’re just going to do what we’re going to do, and we’re not going to pay attention to what other people think.”