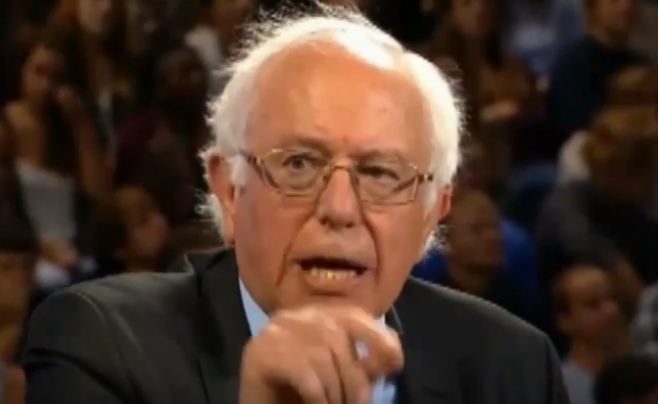 During a CNN town hall debate on Wednesday night, Democrat presidential candidate Bernie Sanders shared his disapproval of the Mexico City Policy which bans the federal funding of any foreign organization that commits or promotes abortion. He called the pro-life policy “absurd” and said women “in poor countries” should have access to abortion and birth control, a comment that received backlash.

During the town hall Martha Readyoff, a teacher, asked Sanders if he was “courageous enough to discuss [population growth] and make it a key feature of a plan to address climate catastrophe,” Sanders responded with a “Yes.” He then fell back on common pro-abortion verbiage saying, “Women in the United States of America, by the way, have a right to control their own bodies and make reproductive decisions.”

Then he began to speak about his distaste for the Mexico City Policy.

“And the Mexico City agreement – which denies American aid to those organizations around the world that allow women to have abortions or even get involved in birth control – to me is totally absurd,” he said. “So I think, especially in poor countries around the world where women do not necessarily want to have large numbers of babies and where they can have the opportunity through birth control to control the number of kids they have, it’s something I very strongly support.”

The majority of Americans disagree with Sanders on this. A 2019 Marist poll found that 94 percent of Republicans, 80 percent Independents, and 56 percent of Democrats oppose the taxpayer funding of abortion.

“If we’re talking about abortion, well, I don’t think that any Western country has a right to pay for abortions in an African country, especially when the majority of people don’t want abortion…that then becomes a form of ideological colonization,” she told BBC. 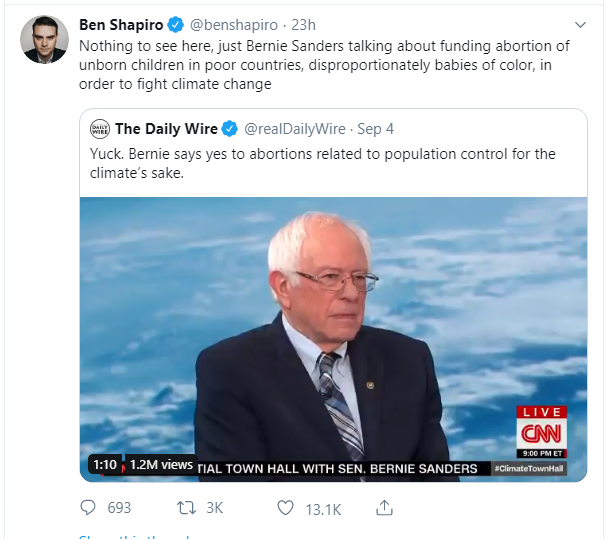 Sanders received criticism for his comments, including from conservative commentator Ben Shapiro who tweeted that Sanders is pushing for abortions for “disproportionately babies of colour, in order to fight climate change.” 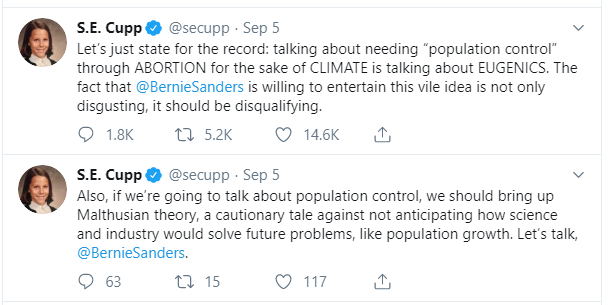 CNN anchor S.E. Cupp tweeted that “talking about needing ‘population control’ through ABORTION for the sake of CLIMATE is talking about EUGENICS.” She went on to note that “if we’re going to talk about population control, we should bring up Malthusian theory, a cautionary tale against not anticipating how science and industry would solve future problems, like population growth.”

The idea that the world is overpopulated is a contested one. Last week, Tesla’s Elon Musk has said that the “biggest problem the world will face in 20 years is population collapse” – not population control. “Most people think we have too many people on the planet,” he said, “but actually this is an outdated view.”

In fact, according to The Kissinger Report, the United States isn’t concerned with population control in order to end global warming, but rather to protect U.S. commercial interests by maintaining access to the mineral resources in third world countries. Factors that could upset the U.S.’s access to these minerals include a large population of “anti-imperialist youth, whose numbers must be limited by government population control.”

Editor’s Note 9/6/2019: This article was edited to add information on The Kissinger Report.