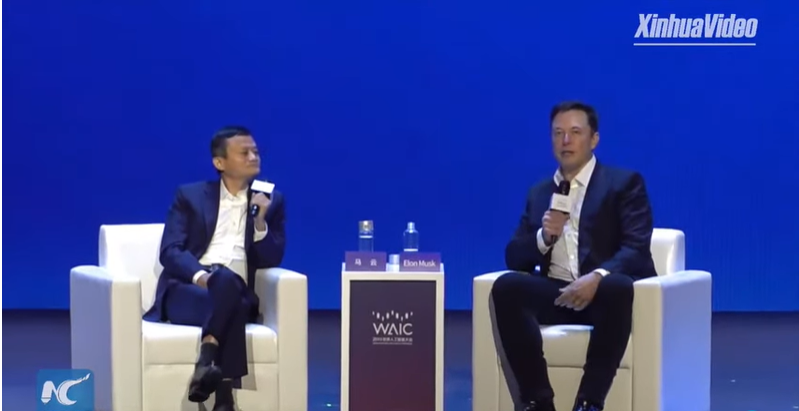 Musk made the comment in a live-streamed debate with Alibaba Group Holding Ltd. chairman Jack Ma in at the August 29 World Artificial Intelligence Conference in Shanghai.

When Ma reflected on the low birth rate in China — which formerly had a one-child policy but now has a two-child policy — Musk agreed that there is a “birth rate” problem.

“Most people think we have too many people on the planet, but actually this is an outdated view,” said Musk.

“Assuming that AI (artificial intelligence) is fine — we’re assuming there’s a benevolent future with AI — I think the biggest problem the world will face in 20 years is population collapse,” he continued.

“Collapse: I want to emphasize this. The biggest issue in 20 years will be population collapse, not explosion, collapse,” he added.

Ma said in response: “I absolutely agree with that, the population will be facing a huge challenge.”

Musk said the “accelerating collapse” will not be able to be checked by immigration.

“The common rebuttal is: ‘Well, what about immigration?’” he said.

Demographers have for years already been warning Western countries with below replacement-level birth rates about what some call the “demographic winter” as a result of the decline. In such a collapse, the old outnumber the young, creating severe imbalances. Economies suffer. Some could even crash. The result could negatively impact, and could prove detrimental, to some of the main infrastructures — such as financial systems and healthcare — that contribute to living in a western democracy.

“An old-age tsunami is hitting not just the West and China, but all of humanity. China is now facing a demographic repression caused by the wanton elimination of 400 million people. So will the world as a whole in decades to come. Elon Musk is right,” he told LifeSiteNews.

Mosher said that governments should follow Hungary’s example where pro-family policies are making it easier for young people to marry and have children. Some of these measures include massive tax breaks for families, housing programs, interest-free loans for married couples, and many other incentives, all geared toward encouraging Hungarians to have children.

“People should be advocating for robust, very robust pro-natal policies,” he said.

Mosher noted that it is also “God advice,” as can be found in the Bible, that babies are a blessing. And, he added, it turns out that this advice is true “even in our secular age.”

This is not the first time Musk has warned about population collapse.

In a July 2017 tweet, Musk noted that the world’s population is “accelerating towards collapse, but few seem to notice or care.”

His comment was in relation to a November 2016 New Scientist article titled “The world in 2076: The population bomb has imploded” that projected a measured decline of global population over the next 60 years, because half of the countries in the world have fertility rates below the replacement rate. The replacement fertility rate is 2.1 children per woman. Most developed countries are far below this.

Musk also told CCCMoney in a March 2017 interview that people “should be concerned about demographic implosion.”

“So if you look at countries like Japan, most of Europe, China,” Musk said, “and you look at the birth rates, in a lot of those places it is only at about half of the sustaining rate.”

He described an inverted demographic pyramid, where older people are on top who are not able to be sustained by the too few numbers of young people beneath them.