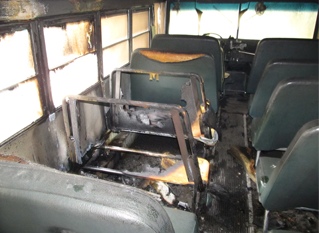 On Friday night, a pro-life bus run by a local Catholic Church with the words “pray to end abortion” on it was firebombed in Rockford, Illinois. This is not breaking news; rather, it happened days ago. I did not hear about it through any major network, though. I actually found out about it through a pro-life friend over Facebook, with the LifeNews article linked to her status. LifeSiteNews also covered the story, with a video link attached as well.

Acts of violence such as this firebombing are terrible crimes. If someone is truly pro-life, he or she does not condone such violence from or against either side, because it is counterintuitive to our side, which seeks to respect and protect all life.

The news today is full of tragic stories, yet why is this story omitted? If the answer is media bias, then I am genuinely appalled and confused. Why should it matter the political or religious message or leaning behind the bus? A crime was committed, and damage was done. Why isn’t this being reported on?

The excerpt from LifeNews, which includes information from a blog, Pro-Life Corner, says that it is speculated that the bus was firebombed in an act of retaliation due to the closing of an abortion mill nearby. No doubt many people were unhappy with an abortion mill closing, but that does not give them any right to stoop to the level of violence of firebombing private property. I’m not even talking about the violence committed against the unborn inside of the abortion mill.

LifeNews also mentions that Frank Munda, who wrote the blog, feels that the Rockford Register Star may have a deep-seated bias against Christians and pro-lifers. The Register Star will gladly mention attacks, which happened 12 years ago, against abortion mills, and run a story on another firebombing around the same time as this bus was firebombed. The blog also mentions further media bias in that the Register Star will not write any articles about hate crimes against Christians and pro-lifers, including this such incident. The Register Star was finally contacted after several attempts and says it is looking into the incident.

The media bias is appalling, but unfortunately not surprising. On April 1, a man in Wisconsin, who was not affiliated with any pro-life organization, bombed a Planned Parenthood abortion clinic. This act of violence should certainly not be condoned. The bias of pro-choicers and abortion supporters, however, made them quick to point the finger at all pro-lifers, it seemed, calling us domestic terrorists. The firebombing of a bus is domestic terrorism as well, yet I do not see any major networks or newspapers covering this story with such fervor.

With the bombing of Planned Parenthood in Wisconsin, however, I saw everything from tweets calling pro-lifers domestic terrorists to major newspapers covering the story with some stories, then relating the incident to what was wrong with the pro-life movement, as if the movement weren’t made up of individuals but rather stood on one ideology.

Yes, it was terrible that a Planned Parenthood was bombed anywhere, ever, though there was minimal damage. It is as terrible, though, that a bus was firebombed. Such a heinous crime is bad enough. It is worse that the media fail to take a stand and cover it, instead remaining so deep-seated in their own bias.

At the time of writing this article, I found the following articles on the Planned Parenthood bombing in Wisconsin. This is not a comprehensive list, nor is it even a list including op-ed article sites, though I am sure many feminist and pro-abortion sites will have plenty to say about how evil pro-lifers are for bombing a Planned Parenthood. I found: CBS News US, USA Today, Huffington Post, The Washington Post, The New York Times.