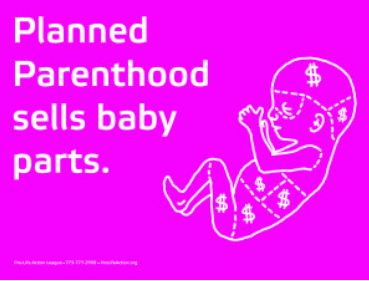 This summer, Live Action News covered California legislation proposed by abortion advocates and backed by Planned Parenthood that would criminalize the recording and publishing of conversations with health care providers, an obvious attempt to shield the abortion industry from the sort of undercover investigative work that exposed Planned Parenthood’s harvesting and sale of aborted babies’ organs.

This week, the Sacramento Bee editorial board joined a long list of abortion-friendly groups—including the California Newspaper Publishers Association, California Broadcasters, Motion Picture Association, and the ACLU—who have opposed AB 1671 as an overly-broad infringement on free speech. But despite calling on California’s Democrat Governor Jerry Brown to veto the bill, the paper did everything it could to convey that pro-lifers are still the real bad guys.

First, the good (which is conveniently saved for the end of the editorial so as not to make pro-aborts look too bad):

Why, for example, should health care providers get special protections? The bill would apply whether they were taped talking about privileged health records or the weather. And what would constitute a provider? This bill seems to cover not just doctors and chiropractors but their lobbyists.

Would the Democrats who dominate state lawmaking have been as open to creating a new crime had this bill arisen from, say, a video sting of a gun-manufacturing operation?

Good question. Sadly, it’s undermined by the rest of the piece’s efforts to cast the Center for Medical Progress’s undercover investigation as illegitimate, pointless, malicious, and even dangerous. Consider the editorial’s ludicrous opening statement:

It’s a hazard of this social media and cellphone era that anything you say might end up being secretly recorded and used online against you. That’s what happened last year to Planned Parenthood, with not only political consequences but collateral violence and loss of life. Yes, because who among us hasn’t broken a string of federal laws to make money off of children we’ve killed? Aren’t we all equally likely to admit to baby organ trafficking if our private conversations are recorded at random? Those are the implications of the SacBee editors’ “anything you say,” “what happened to” rhetoric, as if Planned Parenthood could possibly have fallen into this mess through no fault of their own.

It may be a cliché, but in this case it really is applicable: this sort of thing just doesn’t “happen to” people with nothing to hide.

The video smear by anti-abortion activists involved undercover videos purporting to show Planned Parenthood illegally trafficking in fetal tissue. Planned Parenthood was doing no such thing, of course, and was cleared of wrongdoing, but not before millions of people saw and heard the recordings. Doing no such thing? It is undisputed that Deborah Nucatola said on tape that some Planned Parenthood affiliates wanted to “do a little better than break even,” Mary Gatter negotiated prices because “it has to be big enough that it is worthwhile,” and StemExpress flyers advertised the “financially profitable” nature of partnering with them on fetal organ procurement. The only comments in the videos PP’s apologists point to as exonerating them are nothing more than PP officials talking about not wanting to be perceived as breaking the law; they do nothing to explain away the plain meaning of their own words. (And no, the videos were not edited to make anyone appear to say something they didn’t.)

Nor was Planned Parenthood “cleared.” Some state investigations have turned up empty-handed in states where PP was never accused of having an organ-transfer program in the first place. But most of the CMP footage was taken in California (you know, the Sacramento Bee’s home state)—and California never opened an investigation into the charges. So declaring PP cleared based on a review that doesn’t even include the case’s Ground Zero is like declaring a murder suspect innocent because you searched his whole house except for the locked room with boarded-up windows that the really bad smell is coming from.

Oh, and the federal Justice Department, the body with the most power to turn up wrongdoing, hasn’t bothered to investigate either, and the investigation by Congress’s Select Investigative Panel on Infant Lives is ongoing…

A court order eventually stopped their distribution on an activist’s website.

Because the guilty wanted to suppress evidence of their lawbreaking.

California outlaws the taping of private conversations without permission from all parties, but not their distribution. Planned Parenthood has been trying this year to change that, not only because the videos prompted numerous efforts to defund the abortion provider but because they sparked a wave of threats and clinic attacks that eventually killed three people and injured nine others.

Of course: accurately reporting Planned Parenthood’s activities makes one culpable for people reacting badly to true information (never mind how peaceful 99.99999999% of pro-lifers are or how rare actual anti-abortion violence is); by that logic nobody should ever raise awareness of any scandal or crime with any potential to stir intense emotions.

The Colorado Planned Parenthood shooter, Robert Lewis Dear, was a mentally-disturbed man with a history of apolitical violence, making it a stretch to argue covering Planned Parenthood’s crimes made him do it. But for a moment, let’s assume he was of sound mind; how would that put blood on CMP’s hands? There are numerous cases of people who have snapped and murdered killers, rapists, muggers, etc. By SacBee’s logic, merely informing people of heinous crimes would automatically make any media outlet or police department culpable for these vigilantes’ actions.

That’s the pro-abortion media for you: even when they can’t deny that abortion advocates are in the wrong, the real story is that it’s all pro-lifers’ fault.