(Secular Pro-Life) I don’t know about you, but I often use the data brought to my attention by the SPL blog post “More evidence that most late-term abortions are elective.” A lot.

It’s an excellent case study in the disconnect between rhetoric and reality. As a reluctant online debater, it’s the one thing I’ve felt comfortable bringing to the attention of my pro-choice friends who repeat the idea that late term abortions are mostly done for tragic reasons such as a fatal fetal anomaly or maternal health. We’ve already hashed out the moral underpinnings and philosophical stances we believe. This data offers them an opportunity to demonstrate the rigorousness with which they came to their conclusion.

But reading data and fact sheets can be difficult, especially if you are not used to doing so. Let’s break down how SPL comes to the conclusion that roughly 80% of late term abortions are done for elective reasons (i.e., neither maternal nor fetal health reasons).

Go ahead and pull up your 2017 abortion report from the Arizona Department of Health Services, located here. There is a lot of data. Let’s parse through what is important to our question.

Our first visit is going to be to page 17, Table 9, “Gestational age at time of abortion, Arizona residents, 2017.”  This table will give us a breakdown of all abortions performed, filtered by the age of the pregnancy at the time of the abortion. Our interest here is in abortions of older fetuses, highlighted below. For the year of 2017, there were 157 abortions performed on fetuses anywhere from a few weeks away from viability (24+ weeks), to birth. There is no further breakdown from the 21 weeks or older group. From a pregnancy perspective, this encompasses all of the third trimester, and the tail end of the second trimester. 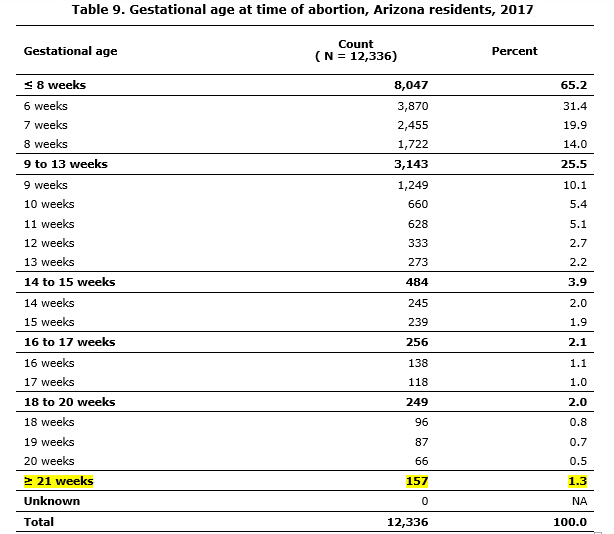 Our next step is to compare that with data on the numbers of late term abortions done for the cause of maternal and fetal health. Luckily, there is data to help us here. Let’s start with maternal health which can be found on page 15 of the 2017 report: Table 7, “Maternal characteristics and maternal medical conditions cited for obtaining an abortion, Arizona residents, 2017.”  Note that “maternal characteristics” refers to the age of the mother and the age of her pregnancy. “Maternal medical conditions” refers to her physical health which was identified as the reason for the abortion. 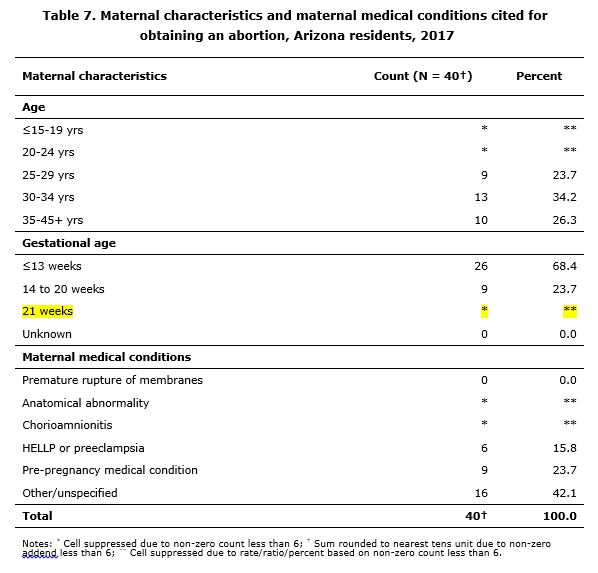 Again, I have highlighted the relevant data. Note that it is empty, and the reason for this, stated in the footnote, is that the number is extremely low: five or fewer. In my experience with Institutional Review Boards (IRB) – a necessary review process for anyone wishing to report data on legally identified people – this is likely a way to make it impossible to identify individual cases with specifics. At very most, this number could be 5, but it is equally probable the number is 1. In either case, it’s a very low number, which makes sense since no medical conditions post viability are actually alleviated by abortion (a multi-day process) that wouldn’t more easily be alleviated by ending the pregnancy with induction of a live birth (usually a one-day process).

Next up is fetal conditions. We will find those on the next page, Page 16, Table 8: “Maternal characteristics and fetal medical conditions cited for obtaining an abortion, Arizona residents, 2017.”  Relevant information is shown below. Again, “maternal characteristics” refers to the age of the mother and the age of her pregnancy. “Fetal medical conditions” refers to the health condition of the fetus which was identified as the reason for the abortion. The relevant line is highlighted. Note, this is a higher number. Of the 157 abortions performed on pregnancies equal to or greater than 21 weeks, 31 were terminated for reasons of fetal health. Also listed are some truly tragic fetal conditions, as well as some that are unclear (e.g. musculoskeletal, twin abnormality). We are also unable to determine which of those conditions match up with the later term abortions. 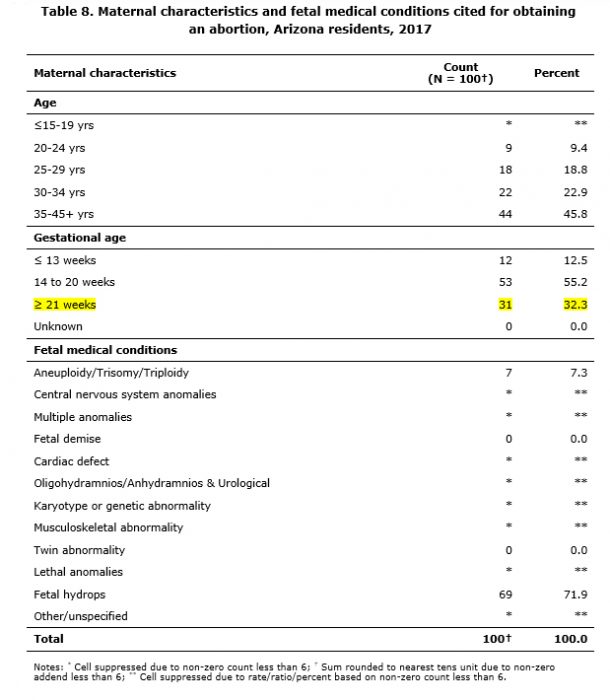 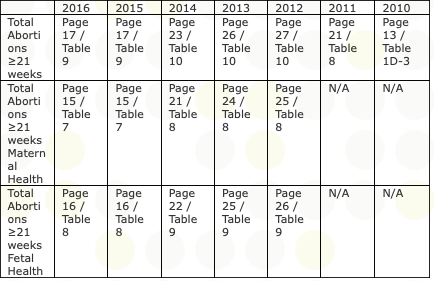 Now, remember I mentioned that there are some maternal health tables that don’t give a number, but are non-zero? Let’s assume the worst, that the number is as high as could be without triggering reporting (5).

That still gives us a 77.0% elective abortion rate. If you substitute those numbers with an average of 2.5, the result is 78.5%. However you slice it, the vast majority of later abortions (21+ weeks) are for elective reasons, and not for reasons of maternal or fetal health.

Question: How do I know these numbers haven’t been fudged by some third party?
Answer: A good question. The simple answer is found in the introduction of the 2017 report:
Beginning July 29, 2010, abortion data is reported using a secure, web-based reporting system. The reporting system was designed to meet the statutory requirements. Reports submitted using the web-based system do not include personally identifiable information (i.e., name, address, birthdate, social security number) and are submitted by password-authenticated personnel only.Question: How do I know the people reporting are being honest in their reporting?
Answer: Somewhat ties in with the last question. The people reporting this are the abortion facilities themselves, and those people have a paper trail. You can actually see the reporting form on the 2017 report, page 23.

Next, you’d want to question motive. Again, I refer you to the introduction: “Reports submitted using the web-based system do not include personally identifiable information (i.e., name, address, birthdate, social security number)…” The data is collected anonymously, so there is no fear of the data coming back to a patient. More importantly, the doctor is doing the abortion. They would (in theory) be the first person to know if a termination was occurring for a medical reason.

If anything, the incentive for the abortion provider would be to inflatenumbers for health reasons, as to follow the narrative that most late term abortions are done for those reasons. Personally, I take the data as it is, with no fudging of any numbers. But I would be more inclined to believe an over-reporting on later term abortions for health reasons than an under-reporting. But this ties into the next question.

Question: How do I know the doctor/ reporting personnel didn’t make a mistake?
Answer: This is a question that comes up all the time in self-reported surveys. The simple truth is that people are humans, and we all do make mistakes. We mitigate that problem by collecting more of it. A mistake can go both ways, over-reporting and under-reporting. The more data we collect, the more see those mistakes cancel each other out, so to speak.

Your Statistics 101 class will tell you that you need a minimum of 30 observations to have data powerful enough to say much of anything. Even just looking at the late term abortion data, we have 674 observations from 2012 to 2017. When we have more data, we can also begin to see patterns. Every year we see relatively the same pattern: very low maternal, slightly higher fetal reasons. It is possible that several clinics are all making the same mistake in data recording every year, but it is not probable.

Question: Well, maybe there are other tragic reasons that have nothing to do with health that aren’t getting reported!
Answer: This isn’t really a question, but I’ll give you a brief opinions on this. Perhaps that might be the case. But the news reporting should match reality – regardless of the topic. If the news wishes to classify financial situation or educational situation or any other thing as tragic enough to warrant the purposeful killing of an individual human being who either could live outside the womb, or are extremely close to it, they are free to make that case. Instead what I see from beloved news outlets are stories of fetal demise, or incompatibility with life.

Editor’s Note: This post was written by K.B. and was published at Secular Pro-Life. It is reprinted here with permission.