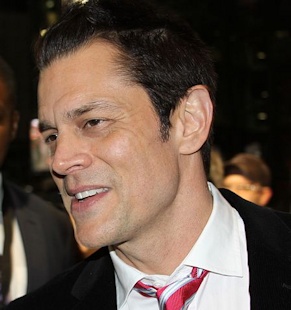 Like most people, I try to avoid raw sewage. Generally speaking, human waste isn’t something that I have much of an affinity for. It’s for this reason that I have never considered going into a portable toilet and then having someone knock it over. However, if you find yourself struggling to understand just why this might be bad idea, I have good news. You’re not alone.

Yeah, you know where this is going…

There is an individual who has built an entire career around asking one question: Is it possible to completely ignore the rules of common sense and somehow survive? The answer, surprisingly, has been yes. Through his Jackass franchise, Johnny Knoxville has spent years performing acts of monumental stupidity that most animals are clever enough not to try. So if you’re one of those folks who simply can’t comprehend what repeated groin strikes might look like, don’t be alarmed. Johnny has illustrated it over and over, so that now you (hopefully) won’t feel the need to find out for yourself.

While most of us probably won’t gain much knowledge from reviewing Johnny Knoxville’s bad decisions, there are some choices that it would be helpful to go over: specifically, the way that our opponents choose to frame and discuss the issues. By observing this, we can develop some helpful dos and don’ts to remember when presenting our message.

Thanks in part to the mainstream media, there’s an established narrative when it comes to abortion. We’re told that the debate is a conflict between the right of women to control their bodies and a desire to enforce religious doctrine. When confronted with this sort of false choice, many pro-lifers begin by explaining that we’re not at all concerned with controlling a woman’s body. Rather, our desire is to protect the growing child inside her.

Now, this is of course a completely truthful response, but it’s also the expected one. What’s not expected is when we explain that abortion isn’t just used to kill children – it’s used to hurt women, too.

A good way to start off is by pointing out that in many abortions, the woman’s choice had nothing to do with it. By some accounts, the majority of women who undergo abortions report feeling that they were pressured into it, with those who resist often facing violence.

Easy access to abortion also makes for an easy way to cover up sexual abuse. It helps to point out specific examples of this, like that of John Blanks, who brought his daughter to Planned Parenthood for a no-questions-asked abortion after getting her pregnant. Or recall how in 2006, staff at a Connecticut Planned Parenthood abortion facility were helpful enough to turn a teenage girl back over to her abuser once the appointment was finished. The fact that Live Action caught Planned Parenthood staff offering to help pimps exploit their underage prostitutes is also something of a narrative-changer.

Finally, there’s a word that you should never hesitate to toss out: gendercide. Mention that in some cultures, a daughter isn’t valued the way that a son is, with the result being that many girls never live past their first ultrasound. Unsurprisingly, Live Action has video of some Planned Parenthood staff who were very willing to dispose of unwanted daughters through sex-selective abortions. If you ask an abortion supporter whether this practice upholds the rights of women, then there’s a good chance that you’re about to see what a contorted answer looks like.

Planned Parenthood is helping girls…to come out in pieces.

The first step in bringing someone over to your side often involves finding something that you already agree on. Since the pro-life message values and respects women, you can try to use the facts listed above to find common ground with someone who professes to also care about females. After all, it’s difficult to argue that helping a man like Christian McQueen abort his child after a “pump ‘n dump” does much for female empowerment.

Conversely, if you happen to oppose capital punishment, then you can convey to other death penalty opponents how the methods used to execute the unborn would be prohibited as cruel and unusual punishment if they were inflicted on a convict. In Wilkerson v. Utah, the Supreme Court declared that “punishments of torture,” including dismemberment, disembowelment, and burning a prisoner alive would be violations of the Eighth Amendment. Yet, while these “atrocities” can’t be imposed on a convicted murderer, they’re perfectly acceptable when used to get rid of a baby.

Some abortion supporters will contend that they don’t want to see children stuck with moms who have no desire or ability to raise them. You can assert that pro-lifers don’t want that to happen, either, but we would prefer that these kids go to the many couples who are waiting to adopt them instead of getting killed. That’s also why we support pregnancy care centers that offer resources to moms in need. Given that most people are at least little queasy about abortion, you can usually get them to agree that abortion alternatives are a good thing.

The trick here is to not get sidetracked onto other issues – you want to establish that abortion violates some common principle or standard that you both already agree on and build from there.

Some years ago, I attended a conservative political event that was surrounded by protestors outside the doors. They were a rather vocal bunch, with one of them taking the time to inform me that I was a racist who hated minorities. I was surprised to learn this about myself; my biracial girlfriend was even more puzzled when she heard the news.

Now, words like “racist,” “misogynist,” and a number of other derogatory terms can definitely be appropriate when the facts clearly justify them. As a rule, however, the better approach is to attack a policy or idea instead of the individual who is presenting it. Since your goal is to change minds, it usually doesn’t help to insult the person you’re speaking to.

Similarly, demeaning language typically doesn’t look good to whoever else is listening in on your conversation. And perhaps most importantly, treating others the way that we wish to be treated is simply the decent thing to do. This last point goes along with the next piece of advice, which is…

4. Try Not to Cut People Off

Occasionally, you’ll run into someone whose ideas sound so ridiculous or offensive that you’re tempted to interrupt or silence him. This temptation should be resisted. First, there’s the issue of common courtesy (see above). Second, like name-calling, it looks bad to others who are observing the debate. Interrupting or talking over your discussion partner comes off as insecure, petty, or vindictive – none of which is the sort of perception that you want to create. Further, it can become an escalating habit. At first you might only interrupt people occasionally, but pretty soon you start to sound like this: 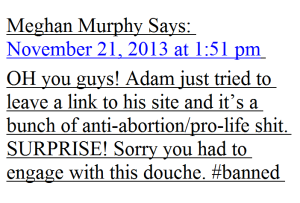 Well, good day to you too…

While you don’t want to let others run roughshod over you, allowing your opponent to present his or her views gives the impression that you’re considerate. It also leaves you better-equipped to offer counter-arguments to whatever message that he or she is trying to convey.

Although polls show that an increasing number of people are identifying as pro-life, large chunks of society remain hostile to our views. By observing how the issues are debated and framed, we can improve the presentation of our message. Because with all due respect to Mr. Knoxville, object lessons don’t always need to involve jackassery.