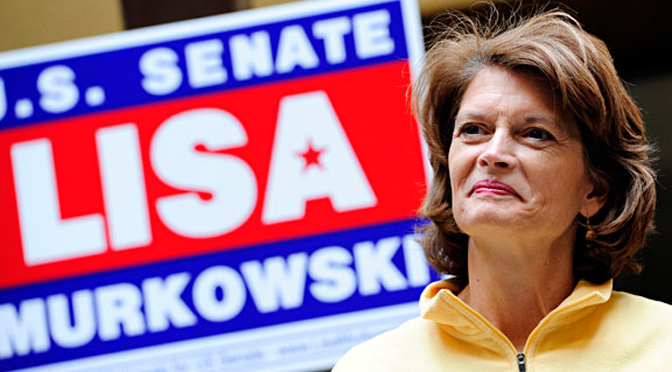 Planned Parenthood may have a new favorite Republican senator. Or at least Alaska’s Lisa Murkowski is auditioning for the part.

She identifies as pro-choice, has a mixed voting record on abortion, and just recently declared herself a “supporter of Planned Parenthood” and a dutiful water-carrier for their continued federal funding:

I’m a supporter of Planned Parenthood. I believe that the services that are provided for the tens of thousands of Alaskan men and woman, access to not only women’s health care but also access to men’s as well, access to screenings, access to affordable birth control, is an important service and I have supported that.

As we’ve repeatedly established over the past few months, the fact that community health centers outnumber them by a factor of twenty undercuts the notion of Planned Parenthood as a uniquely vital health provider, and in Murkowski’s home state the difference is even more stark, with 165 health centers to four—not 40, not 14, but 4—Planned Parenthoods, or a margin of 41-to-1. One might think representing a state entails a reasonably up-to-date working knowledge of its needs and services. Either you would be wrong, or “women’s health” isn’t Murkowski’s primary interest here.

Oh, and Senator? If access to screenings is one of your justifications for Planned Parenthood, what do you make of the fact that their breast exams and pap tests steadily dropped by 41% and 58% from 2009 to 2013, or that because it doesn’t provide any mammograms, the exams it offers are no more sophisticated than what women can do on their own? You’d think that $528.4 million would buy the taxpayers a higher caliber of care than that, or that the recipient would rate it a higher priority. Murkowski continued:

It’s always important to caveat that there are no federal dollars that Planned Parenthood receives that go toward abortions. That’s not the case. So I would like to see the services that men and women receive continue.

First, a senator who sits on the committee overseeing the Health and Human Services Department really ought to have a better command of how health funding works. No, Planned Parenthood doesn’t spend its federal subsidies or reimbursements directly on abortions, but every dollar they get from taxpayers is one dollar fewer they need to get elsewhere, enabling more of their private revenue to go to abortion—which is how a $326 million increase in federal funding over a decade or so can result in a 66% rise in PP’s abortion output.

Second, it’s not your money, Senator. It’s your constituents’. And part of your job is respecting them enough to not force their complicity with evil organizations or to give abominably un-American values, such as killing preborn children, society’s endorsement. As Matt Walsh explains this week, recounting society’s reaction to a Delaware pediatrician who was found to be a serial child rapist:

It would have been so morally repugnant, so disgusting, so idiotic, so depraved and repulsive and outrageous and psychotic, that anyone who breathed a word of such things would have been reasonably accused of being a pedophile or pedophile sympathizer. If you do what Bradley did, you go to prison forever and every trace of your existence and your work will be wiped from the face of the Earth, and nobody will care about what else you did.

Up until this point, I’ve mainly been rebutting Murkowski on talking points her fellow Planned Parenthood apologists have already tried and been refuted on. Calling out the dishonesty and irresponsibility of politicians who repeat arguments that have been publicly established as fallacious is valuable, but it can admittedly get old after a while.

Fortunately, Murkowski also saw fit to give us a more original bit of spin that I haven’t seen elsewhere yet, but will doubtless be added to countless pro-abortion mantras soon. So hopefully we can nip it in the bud here:

But in the meantime, during this investigation, Planned Parenthood should stop the collection of fetal tissue, just stop it in its tracks right then, and allow for the investigation to go forward. And further, that those affiliates would not be able to receive funding […] There are some 700 Planned Parenthood affiliates. Of those 700, there were only seven that do anything related to the collection of fetal tissue. Seven out of 700. So Senator Collins and I voted to get on that bill. We voted to move to proceed. It was not a vote to defund Planned Parenthood.

You see? She’s really a moderate after all, interested in preserving Planned Parenthood’s critical health services but fully on board stopping the organ harvesting. Why can’t we all just be reasonable and defund the bad apples while leaving the rest alone?

Because, Senator, it’s not just a few bad apples. The investigation into the national organization is far from over, and affiliates in most states haven’t even been investigated at all.

By every indication we have so far, this goes straight to the top.

There are few things abortion advocates love more that a Republican who affirms their propaganda, someone they can hold up as a model of centrist reasonability they can contrast against “extremists” who believe crazy things, like that it’s wrong to subsidize fetal chop shops.

But from women’s health funds that don’t improve women’s health to the sheer depravity of Planned Parenthood’s crimes, there’s nothing moderate or reasonable about what Lisa Murkowski is defending.