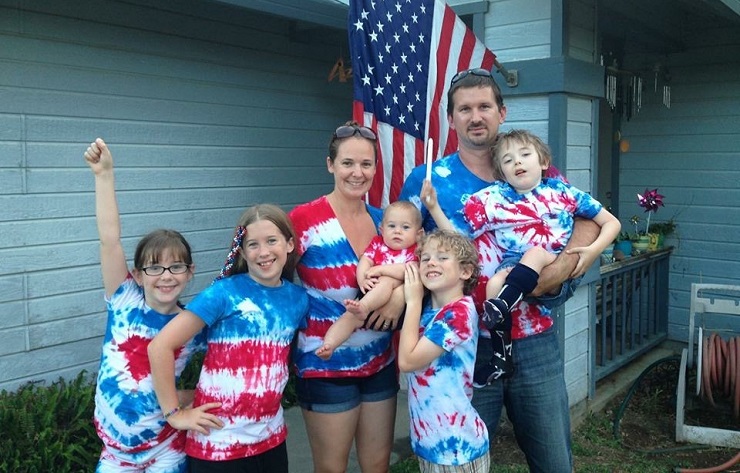 Cherie Wells and her husband Stephen were excited to be welcoming their fourth child into their growing family. Already parents to Grace, Charity, and Dominick, they headed in for the 18-week ultrasound appointment without any indication that doctors would discover anything amiss. They learned they would be having a boy whom they named Kyle, but the ultrasound technician noticed emptiness in his cranium and later that evening the couple received a phone call that no one wants to get. There was a possible diagnosis for their son, and it was one that would lead doctors to advise abortion. Instead, the Wells family chose life.

“That night we got a phone call – that kind that you wish you got a call back saying they had called the wrong person – saying that he had been diagnosed with a condition called holoprosencephaly [when the forebrain does not divide into right and left hemispheres] and that he had a complete absence of any brain matter,” Wells told Live Action News. “They said he was incompatible with life.” 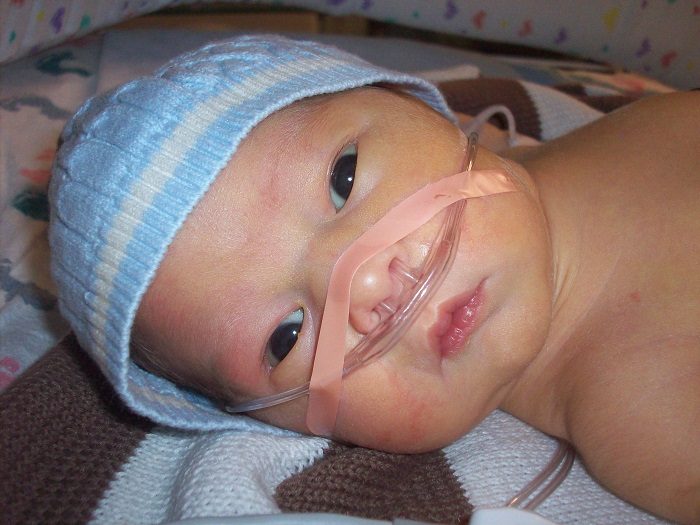 Baby Kyle was born with spina bifida after his parents refused abortion.. Photo courtesy of the Wells family

It was Friday evening and the couple was forced to wait until Monday to speak to a doctor who advised them to go to a different medical facility that was able to offer more accurate testing. They chose to go to St. Joseph’s Medical Center in Baltimore, believing that a Catholic hospital would be more positive and offer hope rather than abortion. Unfortunately, this belief would prove false.

“We met with the genetic counselor and he shook my hand and he said, ‘Your son’s diagnosis is completely incompatible with life. When would you like to terminate and try again?’ We were thrown,” said Wells. “It wasn’t an option to terminate. He was a very much wanted child.”

Doctors then said that Kyle might have a CMV (cytomegalovirus) infection, so Wells agreed to an amniocentesis to check for the infection with the plan that doctors would be prepared with the proper medications to treat her son after his birth. But it turned out that Kyle didn’t have holoprosencephaly or CMV at all. He actually had a neural tube defect. 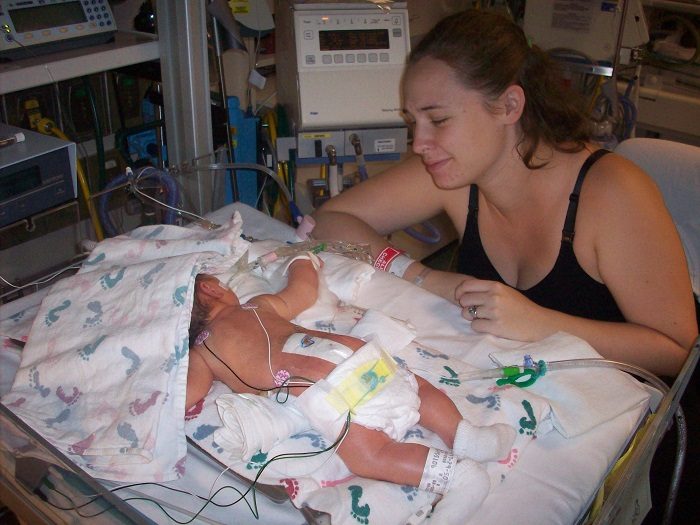 Baby Kyle with his mother. He was born with spina bifida after his parents refused abortion. Photo courtesy of the Wells family

“We went for another detailed ultrasound and they finally got a good shot of his spine,” said Wells. “His spine was split open from the L2 vertebrate to the S5. It was a huge opening that looked like a zipper had not been put together.”

The baby was diagnosed with spina bifida and unlike usual cases, there was no growth over the hole in his back and therefore his spinal cord and neural elements were all exposed to the amniotic fluids. Despite the diagnosis, Wells felt a sense of relief.

“That made me feel better,” she said. “It’s just spina bifida. It’s a very common birth defect and life expectancy is completely normal for these kids.”

The couple met with specialists to make a plan as to how to best help Kyle. And while they always maintained that abortion was not an option, and that they chose life instead, that didn’t stop doctors from pressuring them. 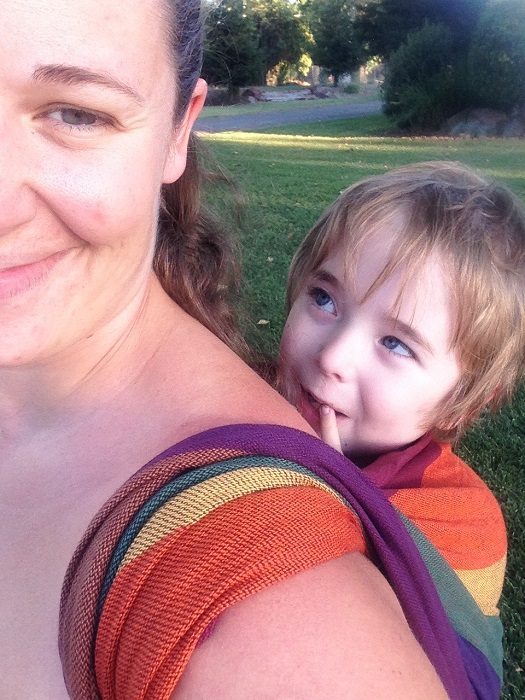 Kyle looks lovingly up at his mother as she carries him on her back. Kyle was born with spina bifida after his parents refused abortion. Photo courtesy of the Wells family

“Every four weeks they offered to remove all the amniotic fluid, wait for his heart to stop beating, and then deliver him,” said Wells, who chose life for her son. “Every time I left crying.”

The Ob/Gyn continued to tell Wells that her child shouldn’t be given a chance at life because of his health condition. They insisted that termination was the best option. But, says Wells, they don’t know anything about children with spina bifida. Obstetricians deliver children with health conditions and then pass them off to the experts and therefore, they don’t have updated and accurate information about the conditions or the actual lives of these children.

“It’s really frustrating as a mom to go to your doctor – you trust your doctor, you take their word as gospel and you believe what they have to say, and then you realize you can’t,” she said.

Kyle Xavier was born on August 28, 2008, at 35 1/2 weeks at Johns Hopkins. That same day, the well-known and highly respected Dr. Ben Carson was performing surgery to close Kyle’s back. Kyle would be paralyzed from the chest down and had a rough start in which everything that could go wrong seemed to go wrong, but after 22 weeks in the NICU and 12 different procedures, Kyle was finally released to go home on Christmas Eve 2008.

At first, he struggled, but as he grew his health improved and he didn’t require another surgery for nearly a year. But as he reached age two and a half it became obvious that he wasn’t meeting his milestones as he was expected to and doctors diagnosed Kyle with autism. 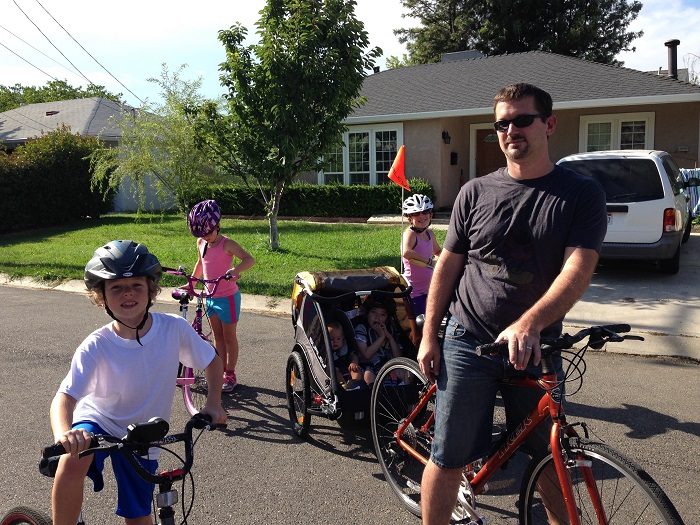 Kyle and his family out for a bike ride. Kyle was born with spina bifida after his parents refused abortion. Photo courtesy of the Wells family

“He had some struggles with that,” said Wells. “He was not a very verbal kid but he did sign some and had certain words for certain things. He was a really awesome kid. There was minor medical stuff that happened but no major hospital stays for more than three or four days. He had a couple of major procedures but they still didn’t keep him in the hospital for more than four days.”

Kyle lived his life much like any other child would. He went sledding, swimming, biking, and did what his older siblings did. He loved watching Veggie Tales and especially loved the character Larry Boy. He enjoyed visiting Legoland, going to Orioles’ games, and watching live concerts. Kyle could recite the first 26 digits of Pi and was enthralled numbers.

At seven and a half years old, doctors told the family that they wanted to use rods to stabilize Kyle’s spine because he lacked the muscle tone to keep his spine straight. As is routine for people with spina bifida, the doctors prescribed an antibiotic before the surgery in order to prevent any bacteria from causing problems in recovery. However, the pharmacy struggled to get prior authorization from health insurance. After a lot of back and forth with the doctors deciding what to prescribe instead, the pharmacy had his prescription ready. Within 48 hours of taking it, Kyle died. 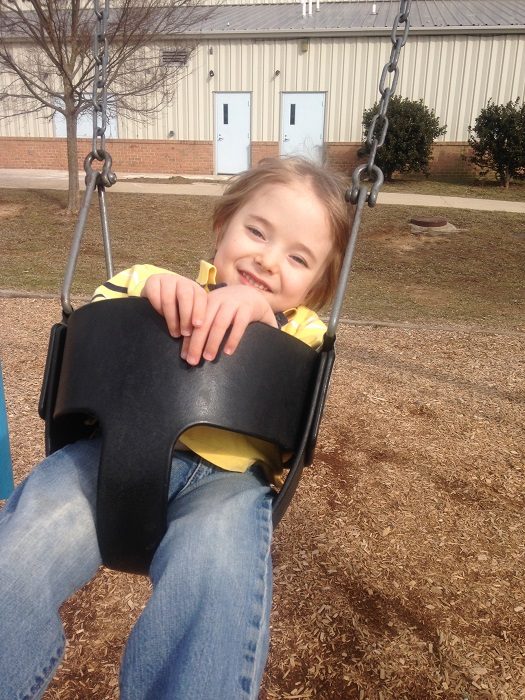 Kyle, who was born with spina bifida after his parents refused abortion, enjoys swinging outside. Photo courtesy of the Wells family

“He was perfectly healthy, getting ready to go for surgery and he just had a reaction to a medication that it turns out the pharmacy dispensed incorrectly,” said Wells. “We were trying to get him into the local hospital and performing CPR and resuscitative efforts for about three hours when he died.”

It turned out the pharmacy had given him double the strength of the antibiotic that he needed – an antibiotic that came with four black box warnings that the pharmacy never told them about. Kyle’s parents never received paperwork with the prescription, just a pill bottle with incorrect instructions on how to administer it. The pharmacy would have to pay two $2500 fines for dispensing the wrong medication and dispensing medication without the proper paperwork.

“We were given a bottle of pills with directions to chop it up and give it with water twice a day for his feeding tube and so we did,” said Wells. “Never in a million years thought that death would be a consequence.”

Though Kyle lived for just seven and a half years, his life had a major impact on those around him, especially his family. His parents will never regret choosing life for their son. 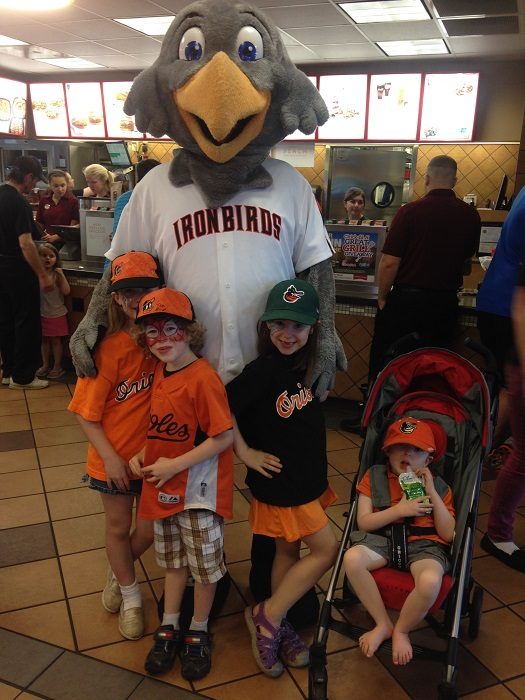 Kyle, who was born with spina bifida after his parents refused abortion, loved watching baseball. Photo courtesy of the Wells family

“I have zero regrets being his mother,” said Wells. “There’s not a moment that I wish that we would have chosen abortion. There’s not even a shred, not even a tiny part that regrets anything that we did for Kyle. He was absolutely amazing.”

Wells says that Kyle taught her other children how to be more compassionate people. She says they are patient and kind and they see people for who they are rather than what they look like. She calls them “amazing kids” and knows that Kyle had a lot to do with that.

Wells, who gave birth to the couple’s sixth child, Leopold, in 2017, urges parents to always seek a second opinion when given a prenatal diagnosis. From experience, she knows that doctors can’t and don’t know everything and they make mistakes.

“Kyle taught me that the medical community is not necessarily as fail-safe as I was brought up to believe,” said Wells. “He really opened my eyes to my responsibility because nobody else carries the responsibility. Doctors can give you their opinions, but at the end of the day, that’s just their opinions.” 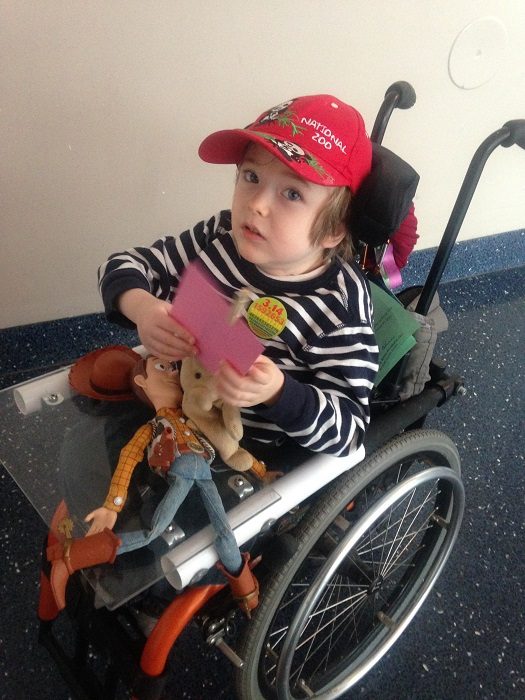 Kyle, who was born with spina bifida after his parents refused abortion, could recite the first 26 digits of Pi. Photo courtesy of the Wells family

In fact, they had friends who also received a prenatal diagnosis of spina bifida for their preborn child around the same time as Kyle did, but that couple chose to abort. After the abortion, they learned their child had actually been healthy.

“Regardless of special needs, you never know, when you abort, what you’re going to miss out on,” said Stephen Wells.

Kyle’s love for life and for his family shows that everyone’s life is valuable and full of purpose. Their parents just have to be willing to see it.