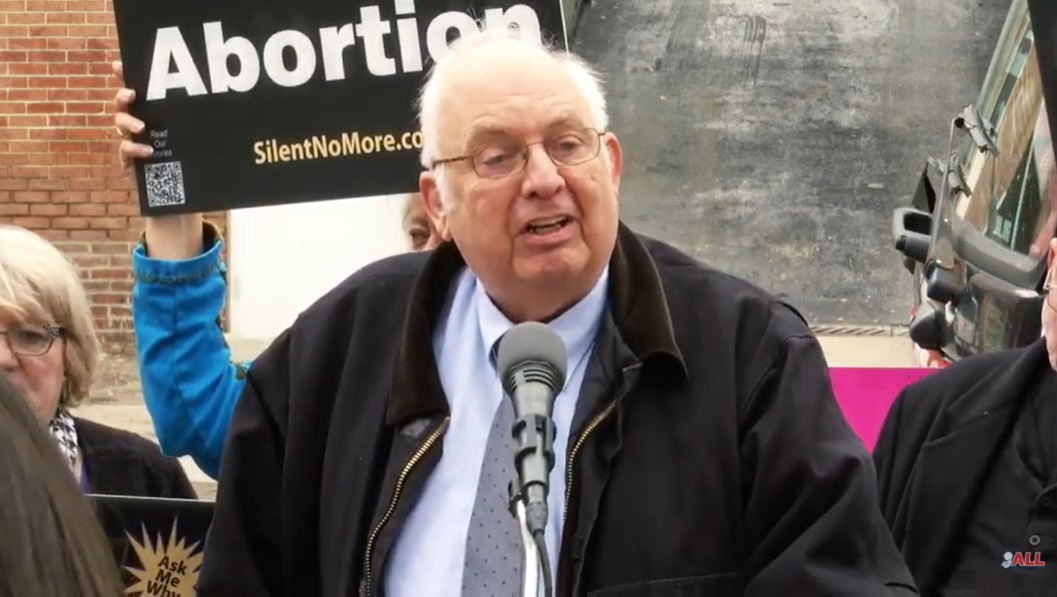 The pro-life movement grieves the loss of Jim Sedlak, the executive director of American Life League (ALL) and a recognized expert on Planned Parenthood, who passed away Monday, January 10, 2022 at the age of 78. He was a husband, father, grandfather, faithful Catholic, and a dear friend to many in the pro-life movement. He traveled both nationally and internationally, exposing Planned Parenthood and training many about how to keep the abortion giant out of their local schools.

“Dear friends and supporters of ALL. It is with sadness that we report the death of James W. Sedlak, executive director of ALL and founder of STOPP, International,” Judie Brown, president of ALL, tweeted. 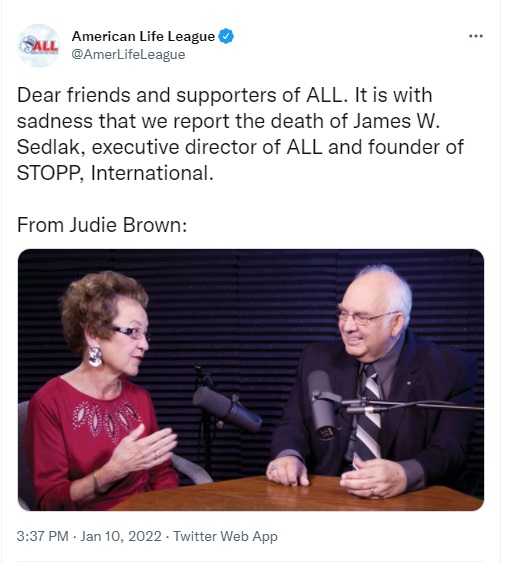 Sedlak was a physicist by trade, and worked for IBM for thirty years.

“Jim taught physics at Marymount High School in New York City. He worked 30 years for the IBM Corporation as a research physicist and as manager of its corporate new products release and control methodologies,” Sedlak’s onine bio states. “While working for IBM, he published four invention disclosures, received seven company awards, ran numerous corporate-wide task forces, achieved the position of senior engineer, and was recognized as the corporate expert on the release and control of engineering changes. He retired from IBM in 1993 to devote a full-time effort to the pro-life cause.” 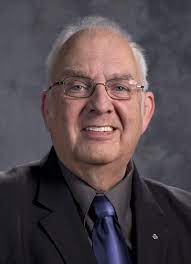 In 2020, Sedlak was a guest on a pro-life show where he detailed his transformation to the pro-life cause.

“In 1979, I read a book called the Tiniest Humans,” Sedlak said. The book was authored by Dr. Jerome Le Jeune and Albert William Liley. “And the book was about their patients, the babies in the womb. And it was just an absolutely compelling book about the humanity of the preborn child. And that’s what brought me into the pro-life movement,” he stated.

That same year, Sedlak attended an event where the guest speaker was Judie Brown, who co-founded ALL in 1979. The two would join efforts years later.

According to Sedlak’s testimony, in 1985, Planned Parenthood announced the opening of a “facility that could do surgical procedures” in his community.

“Of course, we knew it meant abortion,” he stated. “And that’s how we formed an organization called STOPP, which stands for Stop Planned Parenthood.”

Sedlak was passionate about stopping Planned Parenthood’s influence in school sex education programs, as well as ending their ability to root themselves into local communities. His goal was to initially stop Planned Parenthood in his own community, but as pro-lifers learned of his success, that mission quickly blossomed into a national — and eventually international — mission. Though he formed STOPP “just to fight the local Planned Parenthood,” he said, “God had other plans.”

As a result, according to his bio, in 1986, Sedlak co-founded and later became president of STOPP (Stop Planned Parenthood International). The organization eventually joined American Life League. 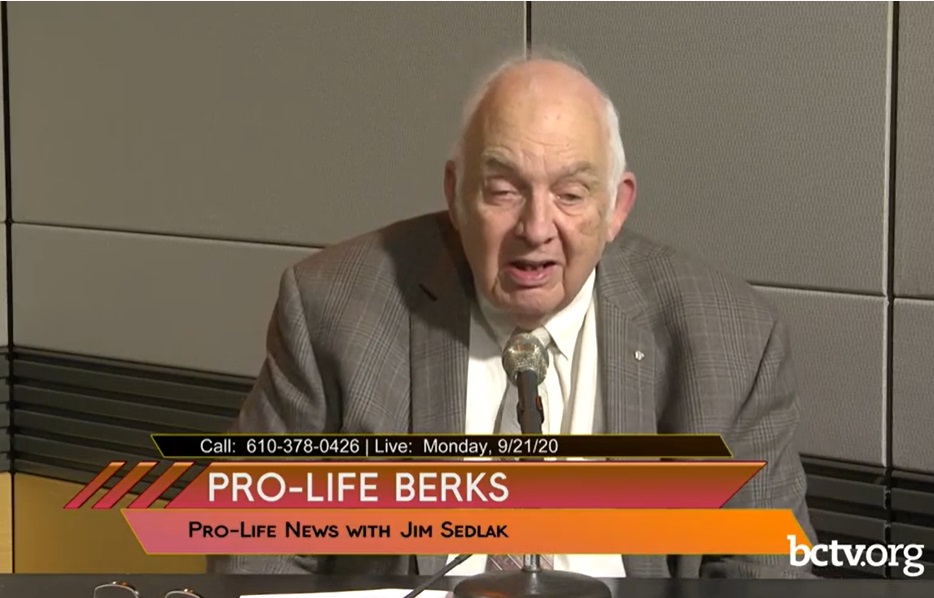 In 1992, Sedlak published the book “Parent Power,” which received glowing reviews from pro-life giants like George Grant and the late Joseph Scheidler.

“Planned Parenthood has been able to have laws passed in a number of states requiring sex education in the classroom. In those states, parents will want to use this book to fight the offensive sex education programs and substitute ‘pro-abstinence’ education until such times as the laws can be changed. In states where no such laws exist, parents are encouraged to get all sex education removed from their schools and to guard against the passage of mandatory sex ed laws,” Sedlak wrote in the book’s introduction.

A year later, in 1993, Sedlak was identified by Planned Parenthood Federation of America (PPFA) as “one of the 15 ‘most active’ fighters against Planned Parenthood sex education programs. In 1995, PPFA featured Sedlak in two segments of its anti-life film Unholy Alliance,” ALL wrote in Sedlak’s bio.

In 1999, as the United States was in the midst of the approval process of the abortion pill (mifepristone), Sedlak warned the New York Times that there could be serious side effects, and he was not wrong. Shortly after the abortion pill was approved, women began to die. ”And I would suspect that it would be the right of the American people to know who the manufacturers are so they can demand legal redress if something goes wrong,” Sedlak told the paper.

In 2017, Sedlak told a group of pro-lifers that Planned Parenthood is “an organization that is unraveling.”

In that speech, Sedlak pointed out that while Planned Parenthood opened eight facilities, they closed 28 facilities. “They have 20 less facilities now (2017) than they did last year,” he said. “And if you go back 20 years, they now have over 300 less clinics then they had 20 years ago,” he added.

“It’s being brought down by Lila Rose and the Live Action videos,” he added, referring to Live Action’s Prenatal Care Deception series exposing Planned Parenthood’s sparse prenatal care and complete lack of mammograms for women. “If I was Planned Parenthood and I took in $1.3 billion dollars a year, don’t you think I’d buy one mammogram machine, and put it somewhere? They don’t even do that,” he chuckled.

One of the last reports Sedlak published before his death was his annual Planned Parenthood CEO salaries report. The report notes that while Planned Parenthood declares that 39% of its customers are people of color, 90% of its CEOs are white. Sedlak observed, “There is an obvious disparity in the way that Planned Parenthood treats its executives of color. That’s rather telling for a business with admitted roots in eugenic efforts to keep Black women from reproducing.”

“From the very first moment I spoke to Jim in 1986 there was no doubt that he was an expert on the ways people in grassroots movements could be most effective in fighting Planned Parenthood,” said ALL president Judie Brown, who lost her husband Paul this past November. Sedlak, Brown added, “always knew exactly what to do to ruffle the culture of death’s feathers.”

“Like St. Athanasius, Jim fought the good fight and defended truth at every turn. He did so with sincere conviction and a quiver full of facts, faith, and strength because he wore the armor of God without apology. He was one of the greatest soldiers in our fight that I have ever known,” Brown also stated.

“Jim was always a voice of experience, of faith, of prayer, and of leaving no unborn child behind. This great movement will miss him, but will not stop learning from him,” wrote Father Frank Pavone, National Director of Priests for Life, and Janet Morana, executive director.

“Jim Sedlak is the perfect example of a good and faithful servant. He always treated others with the respect they deserved as children of God and I was always moved to see him backstage at the @March_for_Life – a humble and good man,” tweeted Tom McClusky.

Sedlak was also a good friend to me, personally, and to all the researchers and writers in the pro-life movement who have worked diligently to document Planned Parenthood’s evils. I can personally attest to Mr. Sedlak’s generosity in providing Live Action and Live Action News with multiple documents to assist us in our research over the years. His value in the movement will never fully be known this side of Heaven, but God knows all that this amazing, kind, and hardworking fighter did for the pro-life cause. After years of speaking to him long distance, I was honored to meet Mr. Sedlak in person at the 2020 March for Life.

“It’s tough to say that’s it’s an exciting time,” Sedlak stated passionately in 2020. “But to be able to get out and fight for the lives of babies and know that we’re saving babies is something that really gets you motivated and really keeps you wanting to go to work every day to save more babies.”

May Jim Sedlak Rest In Peace.