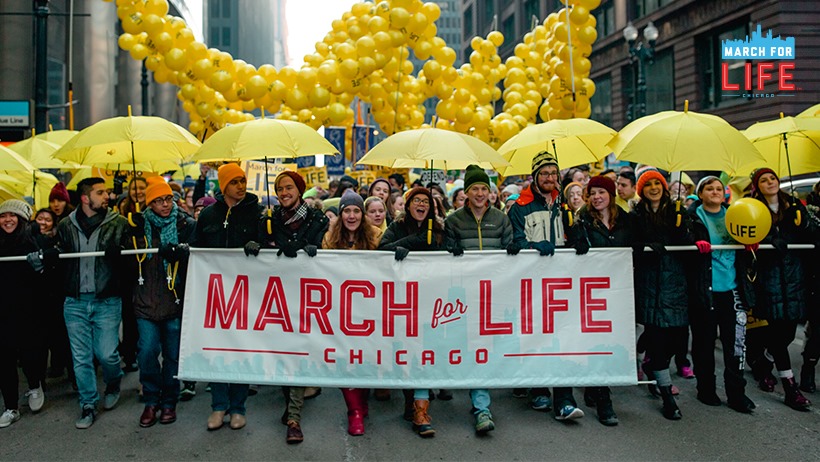 (Right to Life UK) -Thousands of pro-life campaigners marched in Denver and Chicago on Saturday calling for an end to abortion.

The marches are part of a nationwide effort to draw attention to the more than 600,000 abortion procedures carried out in the US each year and call for laws that support women and protect unborn babies.

These two marches took place just two weeks before the national March for Life in Washington, which attracted hundreds of thousands of pro-life marchers last year.

A record-breaking 9,000 people attended the March for Life in Chicago, Illinois which had the theme ‘Life Empowers: Pro-Life is Pro-Woman!’.

Ahead of the march, the March for Life Chicago board president, Dawn Fitzpatrick, told the Chicago Tribune, “There’s more people in Illinois and the Midwest who recognize the urgency of this. We recognize that there’s a human being that’s created from the moment of conception.”

Over 8,000 people gathered for the Celebrate Life rally in Denver, Colorado carrying signs that read, “Civil rights begin in the womb” and “I am the pro-life generation.”

Participants were given the chance to sign a petition to support a policy on the 2020 Colorado ballot, which seeks to protect unborn babies by ending the practice of late-term abortion in the state.

Under Initiative 120, a person conducting an abortion after 22 weeks of pregnancy could be subject to having their medical license suspended for a least three years, except in cases where the life of the mother is at risk.

According to the Charlotte Lozier Institute, a pro-life research group, in 2018, there were 323 abortions that occurred in Colorado at 21 weeks or later in a pregnancy. The survival rate for babies born at 22 weeks has doubled over the past decade prompting new guidance in the UK, allowing doctors to try to save babies born as early as 22 weeks into a pregnancy.

Colorado became the first state to allow abortion in limited instances in 1967. Currently, the state doesn’t have any restrictions on when a pregnancy can be terminated and abortion rights advocates have pushed to keep it that way. Abortion providers in the state can opt-out of providing post-abortion care and don’t require parental consent for minors seeking abortions.

Among the speakers at the rally was Archbishop Samuel J. Aquila, who shared how his experience of working in a hospital as a college student and seeing aborted babies there changed his life.

Revealing details about an abortion procedure that still impacts him decades later, Aquila told Colorado Public Radio “It is tragic and I remember being stunned… I can still remember the horror on the young woman’s face [during the abortion].”

Referring to Initiative 120, the Catholic archbishop assured attendees of the rally that it does not amount to an endorsement of abortion during the earlier stages of a pregnancy.

“But we also desire to protect, even in increments, the gift of given life. We are not voting for abortion, nor are we saying we agree with abortion up to 22 weeks. What we are saying, is that we respect life, and we respect it for all the pregnancy,” Aquila said.

David Bereit, co-founder of pro-life group 40 Days For Life, said “We are not going to rest because what started in Colorado will end in Colorado… Colorado has tried other ballot initiatives on the pro-life side in the past that have failed. This is the one that a large majority of people agree upon.”

Pro-life demonstrations across the world have also seen record numbers in attendance in recent years. In 2019, over 50,000 Slovakians called on the country’s leaders to protect unborn babies. Pro-life demonstrations in Northern Ireland reached over 20,000 people, over 11,000 marched for life in the Netherlands, over 5,000 people marched for life in the UK, and over 2,000 people attended New Zealand’s March for Life.

“What a wonderful way to begin 2020, continuing with the trend of the record-breaking numbers of people attending pro-life demonstrations that we have seen over the past few years, not just overseas but also in the UK.

“In 2020 and beyond, we will be using this momentum and the momentum of a more pro-life parliament to call on the Government to urgently bring forward increased support for women with unplanned pregnancies to reduce the tragic number of abortions that happen each year.

“We are excited to see the pro-life movement continue to grow around the world this year and are hopeful of innovative new laws and safeguards that will support women and protect unborn babies.”

Editor’s Note: This article originally appeared at Right to Life UK and is reprinted here with permission.