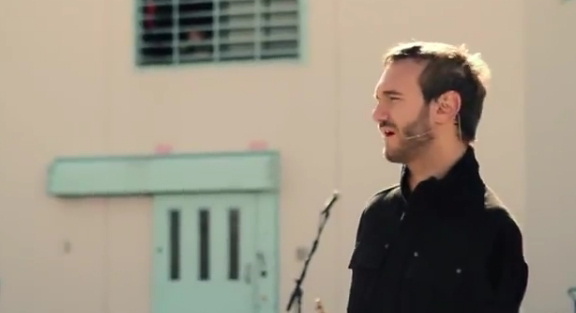 There’s a common and horrifying belief among many of us that unborn children with disabilities should be terminated. Many think that a different life or a life that needs extra care is not a life worth living. People look at a person with Down syndrome or a person in a wheelchair and feel pity. But what’s truly pitiful is that, despite our attempts to dissuade bullying and despite all of the human rights movements we form, we are still judging each other’s worth. We haven’t learned anything from the destructive ways of Nazism or the rise of the Civil Rights Movement. We are still willing to condemn a child to death for being less than our version of perfect. Doctors, who have pledged to do no harm, are still pressuring parents to abort their disabled babies. We have forgotten that we are all a part of the human family. Luckily, there are plenty of differently-abled people living happy lives and reminding us that they aren’t so different after all.

Born without hands, not only has seven-year-old Annie learned to dress herself, swim, type, and paint her toenails, but she has also won a national award for handwriting. According to the Pittsburgh Post-Gazette, Annie was awarded best handwriting in her first grade class, after which her writing sample was sent to the Zaner-Bloser’s national handwriting competition. That company awarded Annie with the Nicholas Maxim Special Award for Excellent Penmanship, which came along with a trophy and $1,000 prize. Adopted as a toddler, Annie is a determined little girl who proves that her life is limitless.

Nick’s parents were shocked when their son was born without arms or legs. They wondered what kind of life he would have, and Nick often struggled with that himself. But today, Nick runs the non-profit Life Without Limbs, traveling the world to inspire us all to be closer to God and to live our lives with gratitude and joy. He is married. He surfs. He works to end bullying and to inspire people to overcome their challenges. He lives a normal but extraordinary life, proving that the only thing that can hold us back is our own fear.

Chase’s story, as told to AOL News, is one that would cause many of us to cry. His twin died during their mother’s pregnancy, and Chase was born premature and legally blind. Then at age 3, his doctors discovered that he was missing parts of his brain: the cerebellum, the area that controls motor skills, balance, and emotions, as well as his pons, the area of the brain stem that controls sleeping and breathing. Yet despite this poor prognosis and his many challenges, Chase is walking, talking, using scissors, and riding a bike. The doctors are dumbfounded. His parents feel blessed. His mother Heather told AOL News, “Don’t give up on your kids. Don’t believe everything the doctors say. Don’t get me wrong. I love doctors. But they can be wrong.” She goes on to say, “People could view this as a tragic story. But that depends on how you look at life. You can be angry or you can appreciate what you have been given.”

The world of modeling is usually criticized for projecting unrealistic images of what women and men should look like, whether because models are too thin or actresses’ photos have been altered. But this year, young Ryan inspired the special needs community and the world when he posed alongside other children his age for Target and Nordstrom. Ryan has Down syndrome. In the United States, 90% of children with Down syndrome are aborted. Ryan is helping to shed light on this troubling statistic and the unfortunate, unrealistic belief that Down syndrome sentences people to a life of misery and suffering. On the pages of those catalogs and at home with his twin brother, Ryan is just like any other 6-year-old boy with a joyful, successful life ahead of him.

Doctors told Colton’s parents seven times to abort him. They warned them that he would likely die before birth. He didn’t. They said he wouldn’t survive labor and delivery. He did. They said he would be a “vegetable” who couldn’t recognize his own mother and would never smile or laugh. He is proving them wrong. Colton was born with hydrocephalus, leaving the middle part of his brain undeveloped and full of fluid. Yet after surviving surgery to place a shunt in his brain, Colton is a happy eight-month-old boy who not only laughs at his big sisters, but is also meeting his milestones with a bit of help from occupational and physical therapists. He is shocking all of his doctors, to the great joy of his parents.

Diagnosed as a baby with cystic fibrosis (CF), Ronnie defied the odds by surviving to adulthood. But not only has he survived – he is now a husband and father, as well as the founder of Cystic Life, an online community for people with CF who cannot socialize with each other in person due to health concerns. Between and during numerous hospital stays and daily therapies in the battle to keep his lung function high, Ronnie works diligently to raise awareness of CF, and he celebrates life every day, as is apparent on his blog RunSickBoyRun.com. Yet, according to Kaiser Permanente, over 90% of its patients in Northern California alone terminate babies with CF. Ronnie is living proof that life with CF is very much worth living.

When we say it’s okay or even good to abort a baby because she has a disability, we are telling each of these people that their lives are meaningless. We are telling them that to have an “imperfection” is unacceptable. We are teaching our own children that people with disabilities are unworthy of love and life. It isn’t sympathetic to kill someone because she has a genetic condition or a disability. It is the coward’s way out. It is evil disguised as an apparent good, and it is unacceptable.