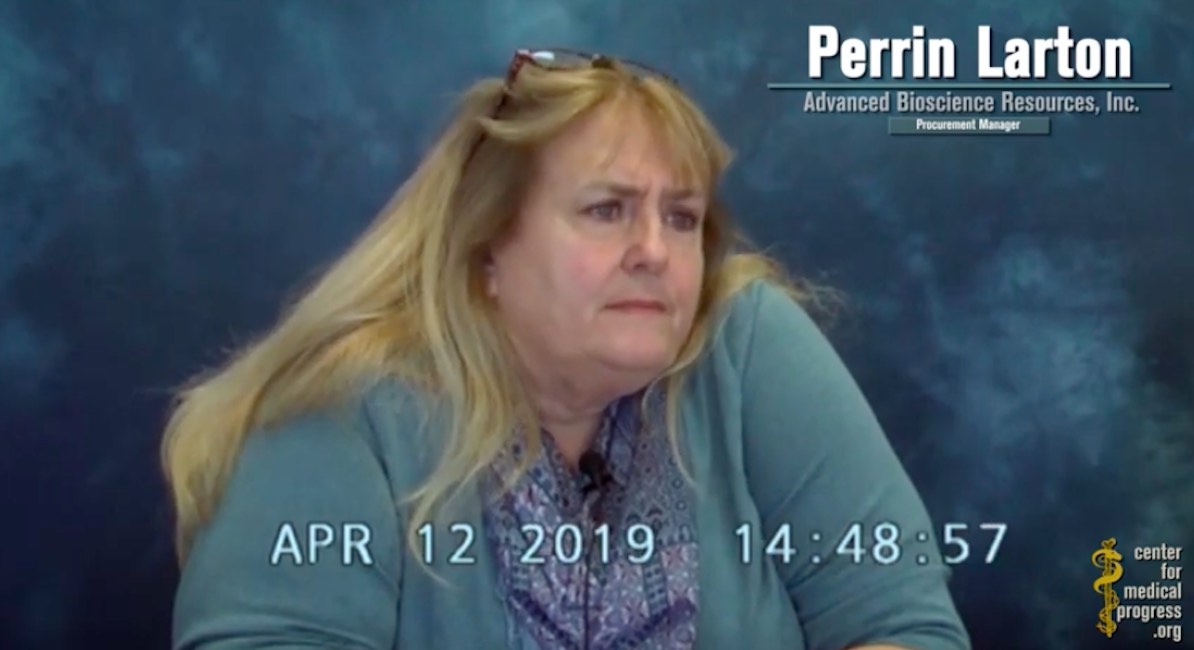 The Center for Medical Progress released a new video on June 30, 2020, detailing the shocking under-oath admissions about babies surviving abortions… with some being dissected for their body parts.

Some babies “just fall out”

Perrin Larton, Procurement Manager for Planned Parenthood’s procurement partner Advanced Bioscience Resources, Inc. (ABR) was filmed in an original CMP video saying that usually, babies do not come out intact after an abortion but instead are “always pulled apart.” However, she added that this is true “unless it’s somebody who has had six pregnancies and six vaginal deliveries. They put lams [laminaria to dilate cervix] and she comes in the next morning and… I literally have had women come in and they’ll go to the OR and they’re back out in three minutes and I’m going, ‘What’s going on?’ ‘Oh yeah, the fetus was already in the vaginal canal and whenever we put her in the stirrups it just fell out.'”

When that video was viewed by Larton under oath, she stated that an aborted baby would fall out about “once every couple of months.” The intact baby would then be dissected in the lab to obtain the specific organs and tissues requested by researchers for that day.

Attorney: By not alive do you mean not moving?

Attorney: And do you mean that they did not have a heartbeat?

Larton: It would depend.

Attorney: And when you say it would depend, what do you mean?

Larton: There are… I can see hearts that are in not in an intact POC [product of conception] that are beating independently.

Viability of a baby “depends on where you work”

Dr. Deborah Nucatola, former Senior Director of Medical Services for Planned Parenthood Federation of America, is also featured in the video. She is perhaps best known for the undercover video showing her eating salad and sipping wine while discussing how she carefully crushes preborn children during abortions to preserve the organs in high demand from researchers.

When asked if she had ever had a patient deliver a nonviable fetus, Nucatola replied “I’m sure that I have.” Nucatola went on to describe what she means by a “nonviable fetus:”

I don’t define that. Viability is … well, I do define that sometimes… There’s many criteria that you can use to determine viability… Depends on where you work… Viability is determined on a case-by-case basis [at Planned Parenthood] … You can use different things [to determine viability]… Estimated fetal weights, gestational age, the health of the fetus, the availability of interventions.

It is unlikely that Planned Parenthood, which cannot properly care for women injured in abortions, would have proper interventions available to care for a born-alive infant that it failed to kill inside the womb. The goal of an abortion is to prevent a live birth. If a ‘lack of available medical interventions’ is one of the determining factors as to whether or not a baby born alive is considered viable by Planned Parenthood staff, it is likely that no baby would be considered viable if accidentally born alive there, regardless of gestational age, weight, or health.

Nucatola’s admission reveals exactly why protections are needed for abortion survivors, and why abortion advocates fight so ardently against those protections.

Also featured in the video was Jon Dunn, CEO of Planned Parenthood Orange and San Bernardino Counties. Dunn, who admitted he is not a doctor, said that about 20 years ago, he was made aware of an infant who survived an abortion at a Planned Parenthood facility.

“I have only vague recollection of it,” he said. “I know they kept it warm and comfortable for the very brief period that it was alive. I don’t think there was even time to call 911. It was a matter of seconds.”