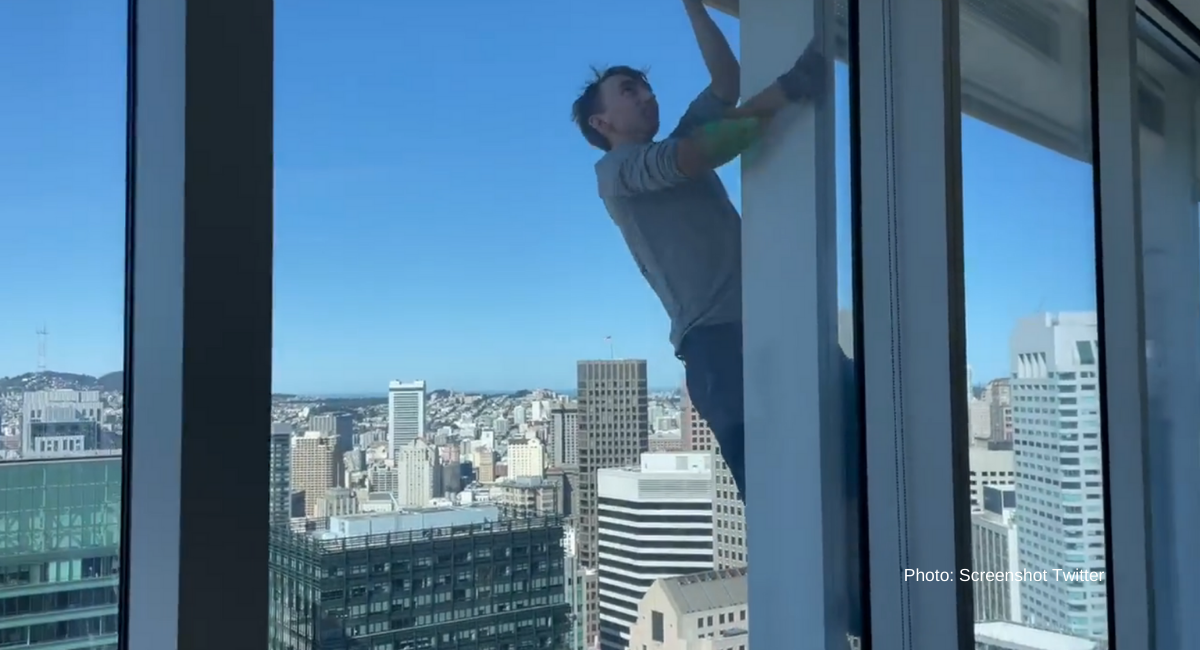 Update May 9, 2022: Pro-life Spiderman was at it again last week when he scaled the 52-story, 721-foot New York Times building Thursday morning and hung two pro-life banners, according to police and his Instagram page.

Maison Des Champs is said to have begun climbing the building at about 5:00 in the morning, noting that no one noticed him. One of the banners he hung stated, “ABORTION KILLS MORE THAN 911 EVERY WEEK!” Another had an image of a preborn child and called out an abortionist for his part in killing these babies.

“I am pretty high up, about halfway, I’d say, maybe, I don’t know,” he said. “But damn, I think I’m gonna make it up to the boss level before they figure out I’m up here. No one’s seen me yet. Kind of cool.

“Oh yeah, the city that never sleeps,” Des Champs said in another clip, as the camera panned the pre-dawn cityscape. “Well, sleep on this.”

After reaching the top of the building, he was able to get inside and take the elevator to the bottom without having been detected, and police confirmed to the New York Post that he was not arrested.

May 4, 2022: A pro-life activist who goes by “Pro-Life Spiderman” gained national attention on Tuesday when he scaled San Francisco’s tallest building without ropes or safety nets in an effort to raise awareness about abortion as well as raise money to help women choose life.

According to Fox Business, officers were waved down by people at about 9:20 am after they spotted Maison Des Champs, a rock climber, scaling the 60-story Salesforce Tower in downtown San Francisco. In September, following Texas’ enactment of The Heartbeat Act, Salesforce offered to relocate thousands of employees out of Texas. Des Champs had begun shortly after sunrise, according to TMZ. When he reached the top of the tower at about 11 am, Des Champs was taken into custody by police.

According to his own website, ProLifeSpiderman.com, 22-year-old Des Champs started rock climbing at the age of 16. He recently began climbing skyscrapers to end abortion. His goal is to get Dr. Cesare Santangelo, the late-term abortionist responsible for the deaths of the five babies recently discovered in medical waste, arrested. Those babies appear to have been killed in a questionable manner, with at least one possibly killed by illegal means according to experts — while at least one other may have been born alive.

In addition to exposing Santangelo for his horrific killings of babies in the second trimester, Des Champs wants to raise $1,000,000 for pro-life charities including the California Right to Life League, Save the Storks, Save Unborn Life, Let Them Live, Nevada Right to Life, and CareNet Detroit.

“Dr. Cesare Santangelo is an abortionist from Washington D.C.,” Des Champs wrote on this Go Fund Me page. “Over a month ago pro-life activists with help from a whistleblower obtained the bodies of 5 murdered babies that had come out of Dr. Santangelo’s clinic. These babies were murdered during late-term abortion and it is believed that some even survived their abortions and were left to die. Dr. Cesare Santangelo is not in jail and there is currently no investigation.” Santangelo previously admitted during a Live Action investigation that he will not help babies who survive his abortions. (For more information on the five babies and Santangelo, click here and here.)

Des Champs said the goal of his “peaceful mission” is to raise awareness and ensure Santangelo is held accountable. “The mission is simple: destroy what is evil and protect what is innocent,” he explained. “The aim of this project is not to blame women but instead to support them. Women have become victims of cultural and societal pressures.”

Des Champs said he has no regrets and would “do it again,” adding that the only thing he felt went wrong was that he got thirsty near the end of his climb.

He is calling on all pro-lifers to speak out against the atrocity of abortion.