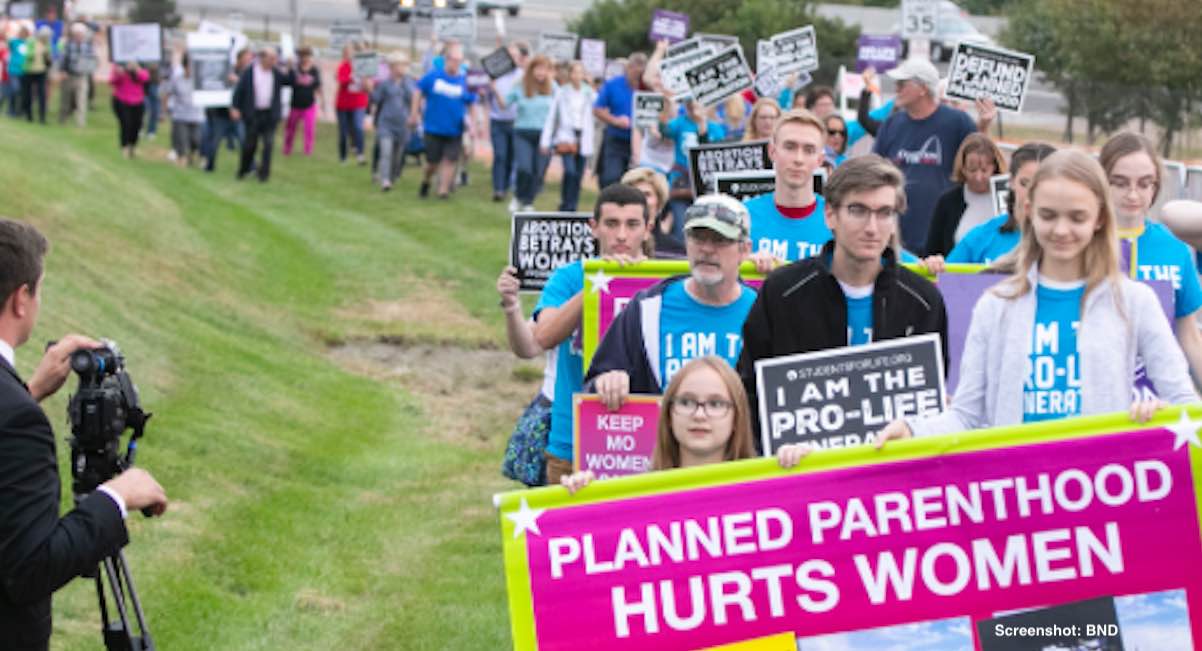 On Wednesday night, Students for Life, together with local pro-life groups from Missouri and Illinois, held a rally at a new Planned Parenthood facility which was built in secret and is set to open later this month.

An estimated 400-500 protesters joined in marching around the facility, headed by a large sign that read: “Planned Parenthood hurts women.” The crowd was largely decked-out in blue shirts declaring, “I am the Pro-life Generation.”

Among the speakers who were scheduled to appear were Illinois Right to Life Executive Director Mary Kate Knorr, Madison Reynolds of Southern Illinois University Edwardsville Students for Life, and Mary Varni from the Archdiocese of St. Louis. State Rep. Avery Bourne, who strongly opposed Illinois’ Reproductive Health Act (RHA) that enshrined abortion as a fundamental right in the state and removed licensing requirements for abortion clinics, was also in attendance.

READ: The abortion law in Illinois is even worse than we thought. Here’s a plan to fight back.

“It’s not easy to be pro-life in the legislature,” she said to the crowd, according to the Belleview-News Democrat. “This last session, they passed the RHA, and they said they were passing that because they needed to do it in case Roe v. Wade is overturned. They said it was just cleaning up some language. Well, here’s what it actually did,” she said as she indicated the new building. “This is what the RHA did. This is what they wanted to have happen. They wanted Illinois to be an abortion destination in the Midwest. They wanted women to come from other states to here, to not only get abortions that are illegal in other states, but they expanded late-term abortion so that they are now legal in Illinois, and they can be performed here. What they wanted in the General Assembly was for taxpayers like us to have to pay for abortions.”

The Fairview Heights location of the new Planned Parenthood facility is just over the border from St. Louis, Missouri, where a large abortion facility is fighting to keep its license after failing multiple health inspections and sending dozens of women to the emergency room over the years. Currently, the St. Louis facility is being allowed to operate without a license.

As previously reported by Live Action News, the new construction in Fairview Heights began around August 2018 under the auspices of a shell company, specifically to conceal the purpose of the building and corner the St. Louis market. Because of the location’s centrality and proximity, it was chosen to be a “regional hub,” reports the Belleview-News Democrat.