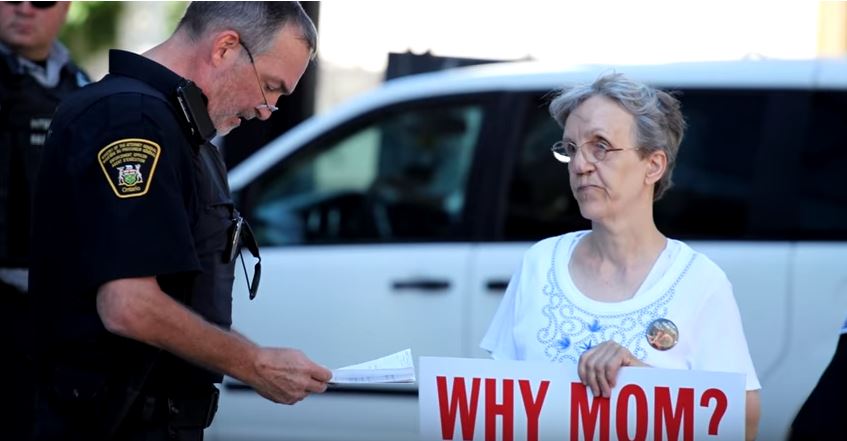 Linda Gibbons carries a simple sign featuring a picture of a born baby posing the question: “Why Mom? When I have so much love to give.” But this non-threatening, non-graphic sign keeps landing her in jail. Gibbons has been arrested countless times for standing in the “wrong” location with her sign — and because of it, she has collectively spent over a decade of her life in prison. Still, this pro-life activist and grandmother has zero plans of ceasing her peaceful abortion activism outside of the Morgentaler abortion facility in Toronto, Canada. She knows that lives are on the line and that women and babies need her.

A 1989 temporary injunction named certain individual activists, ordering them to stay 500 feet away from the abortion facility. Gibbons not one of those activists. In 1999, that injunction was made permanent when the named activists agreed to settle. The terms they agreed to are now the terms Gibbons is forced to live with in her personal battle against abortion. It’s personal because Gibbons is a post-abortive mother. 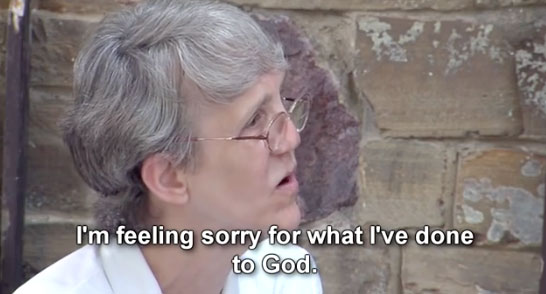 Gibbons reaches out to those mothers because of her own abortion grief. “[…] When you realize you have no graveyard to go to mourn your child. When you wonder what happened to the body of my child. I guess in my mind I was hoping to find out was it a boy, was it a girl,” she said in a documentary about her pro-life efforts.

Years ago, at a church event, Gibbons watched “The Silent Scream,” a documentary in which former abortionist Bernard Nathanson describes a Dilation and Evacuation abortion, commonly known as a D&E. This type of abortion, as explained by former abortionist Dr. Anthony Levatino in the video below, is committed on preborn children from 13 weeks to 24 weeks gestation:

This documentary was “the galvanizing point,” Gibbons said, of her entry into pro-life activism. “And at one point [Nathanson] said the body is often sucked off and the head remains in and he says, ‘then the head is crushed.’ And I’m saying, my child was 13 weeks. My baby’s head was crushed to pieces,” recalled Gibbons of the documentary.

Gibbons, who was awarded the Mother Teresa Pro-Life Award in 2012 and the Queen’s Diamond Jubilee Medal in 2013, simply refuses to stop trying to save children from such a horrific fate and their mothers from a lifetime of pain and regret like hers. Even after the Supreme Court of Canada ruled that Gibbons could be criminally charged for violation of a civil order, she continued to walk silently back and forth in front of the abortion facility. She believes in her right to protest peacefully and believes the courts treat her unfairly because of her anti-abortion convictions – which doesn’t appear to be an incorrect claim. It seems that it’s all about the money: abortion is a big business in Canada as well as the United States.

“We had 21 of us praying in a circle on one side of the alley behind the abortion clinic. So we were not even talking to any of the women going in,” she recalls about one of her over 20 arrests. “That venue was simply to go there to pray. And at trial, the judge said, ‘Maybe some woman would have seen you praying; know you disapproved of her having an abortion; and that would have influenced her not to have it, and that would have hurt the clinic’s financial interest.”

In addition, she says, the injunction actually states that when she and her co-activists are present in front of abortion facilities talking to women, it affects the abortion clinic’s bottom line because they are “losing customers” which is “hurting their assets.” It seems that to the Canadian government, the abortion industry’s profitability is more important than the free speech of citizens, and certainly more important than the lives of innocent children; according to Gibbons, they are “into the commercialization of killing.”

There are few pro-life activists willing or able to spend months at a time in prison due to their jobs or families, which makes Gibbons an extraordinary voice for preborn children. She is willing to put it all on the line to save their lives. At times when she is arrested, there have been up to six police officers present. When she is being held, her fellow activists will stand outside of the police station, holding signs of aborted children and handing out brochures to help other Canadians learn why Gibbons is in jail as well as the truth about abortion. And when Gibbons is in prison, she doesn’t waste any of her time. She has befriended other prisoners, calling them “my girls,” helping them to learn about forgiveness, and allowing them to mourn their own children lost to abortion. She understands their pain well, and encourages them to name their children.

And as soon as Gibbons is released from prison, she is back on the sidewalk in front of the abortion facility — back to fighting for the lives of the preborn children carried in their mother’s wombs through the doors to their deaths. When she does save a child, it’s reason to celebrate. And Gibbons was, on at least one occasion, able to be present at the birth of one of those children, whose mother can’t imagine how her life would be if she had aborted.

1) Should the government should be financially supporting abortion facilities, essentially creating government-funded killing?

2) Are these “bubble zones,” such as the 500-foot one that surrounds the Toronto clinic, actually denying Gibbons and other pro-lifers their fundamental rights to freedom of expression and speech?

3) Are pro-lifers discriminated against when they are not only forbidden to speak because the government disagrees with what they have to say, but are actually imprisoned for it?

In Canada, abortion is considered a right — one which trumps a preborn human being’s right to life. Pro-life activists like Gibbons are often looked down upon when government officials are so well woven into the abortion industry that people are often afraid to speak against it. Gibbons, having experienced the pain of abortion, knows the truth and isn’t afraid to risk her own well-being to share that truth with others.

“I wouldn’t say the fight is lonely,” she said. “I would say the fight is long. That the deeper abortion gets entrenched into our society, the more difficult it will be to get it out. Abortion is no form of medicine. A man performing abortions is no kind of doctor. But when we begin to dress the killer up in a white coat and then pay him out of government money — the law is meant to direct people on what is proper, good behavior and this really muddies the water. And then for the government to pretend the injunction is anything other than stifling pro-life activity is a red herring.”