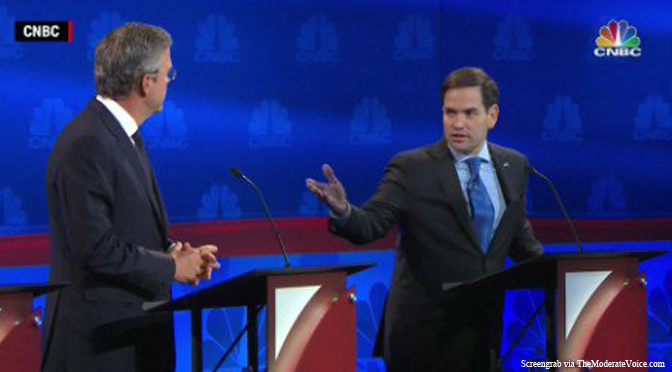 Former Florida Governor Jeb Bush has been having a rough time trying to become the Republican presidential nominee for a variety of reasons, but his pro-life record—particularly his going above and beyond the call of duty in trying to save Terri Schiavo’s life in 2003—could have been an asset.

Instead, he’s largely squandered it by dismissing news of his role in the pro-abortion Bloomberg Foundation with a casual “it doesn’t matter,” declaring that defunding Planned Parenthood isn’t worth risking a government shutdown, and declining to commit to nominating Supreme Court justices certain to overturn Roe v. Wade. And now comes word that the “Right to Rise” super PAC working on his behalf plans to attack rival Marco Rubio for… being too pro-life…

Jeb’s Right to Rise PAC previewed two videos for a focus group of New Hampshire voters on October 28, one of which portrayed Rubio as a pro-life extremist.

That video contains footage of Rubio from the first 2016 Republican primary debate, hosted by Fox News. When Megyn Kelly asked Rubio if he supported abortion in the cases of rape or incest, Rubio replied, “I have never said that. And I have never advocated that.”

He later clarified that, while he does not believe in exceptions, he would sign bills that contain them.

The Bush campaign ad portrays Rubio’s affirmation of all life as disqualifying, making him too extreme to win a general election, three Republican insiders told the New York Times.

Unreal. When the main knock on your candidate is (rightly or wrongly) that he’s too moderate, how does it make sense to reinforce that stereotype by attacking a competitor for being overly principled? This line of attack opens up Jeb for a devastating counterattack from his right flank: why would you put votes over babies instead of standing on principle?

It is true that Right to Rise is independent of Bush’s campaign, and so Team Jeb wasn’t directly responsible for the ad and can’t legally put the kibosh on it, but you can only be surrounded by so many professional supporters who are soft on protecting the preborn before it raises questions as to why the candidate himself attracts backers with such priorities.

To correct the situation, Ramesh Ponnuru advises, “Bush cannot control Right to Rise, but he can and should make it clear that he opposes attacks on Rubio’s pro-life views.” Doing so wouldn’t do much to entice those who’ve already jumped ship back into the fold, but it would be a show of pro-life principle and goodwill that would stem the bleeding.

As we’ve discussed before, concerns over a no-exceptions pro-life message’s prospects with the general public are not entirely without merit, but there are ways to defend it compassionately while keeping the conversation focused on the extremes of the other side, which Rubio has so far done as well as can be expected. Moreover, it is baffling whenever candidates and strategists treat primaries like general elections. This is the stage of the process where what is most important is inspiring your base to turn out, not lecturing them about how their values and priorities are too extreme!

Having strong principles and an intelligent, strategic vision for enacting them are distinct and equally important aspects of leadership. Right to Rise apparently thought they were making a case that Rubio was all the former without the latter, but they failed spectacularly. The way to persuade that your candidate is the real deal isn’t to complain that competitors are too principled—it’s to lay out your own approach and, if it really is better, let it speak for itself.