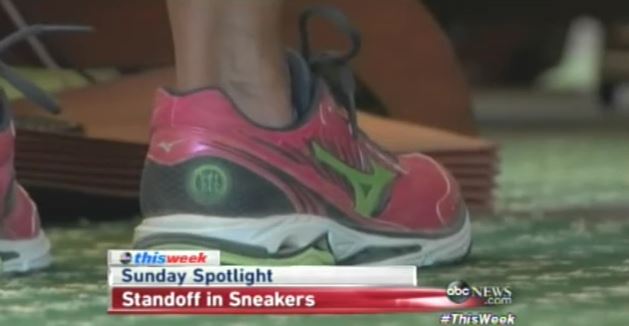 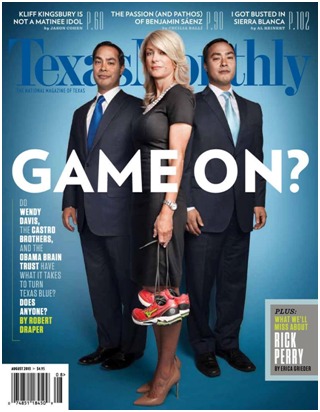 My friends, it’s time to brace yourselves for some bad news. It seems that abortionism’s latest icon, Texas state Sen. Wendy Davis, isn’t being treated with the deferential awe she so manifestly deserves. We can’t have that, can we?

It is a bit embarrassing that Abortion Barbie doesn’t even have her facts straight on Kermit Gosnell considering abortion is her issue. […] Think of the accessories Abortion Barbie has with her pink sneakers.

The name of the iconic fashion doll is typically understood as shorthand for superficial appeal without true substance or depth. That fits Wendy Davis to a T – she avoids challenging questions about her own pet cause when she can, and when she can’t, the results are shamefully ignorant and evasive. She enjoys puffball treatment from the big three news networks, much of which is fixated not on policy, but her fabulous footwear…which happens to be in Barbie’s signature color (more proof that God has a sense of humor?).

Cue the outrage. The web is abuzz with the usual litany of condemnations about right-wing sexism and incivility. At the New Yorker, Amy Davidson offers a characteristic example:

Kermit Gosnell was the doctor convicted on murder charges after running an unsafe, illegal operation. Davis had answered a question about him and, after saying that she didn’t know much about the case, had gotten a fact about it wrong. (It had to do with whether Gosnell’s clinic was licensed as an ambulatory-surgical center.) Davis, who has a degree from Harvard Law School, rightly pointed out its disconnect from the Texas bill.

First, the fact she got wrong was the one fact about the case she went out of her way to stress she did know – precisely the sort of error we’d never hear the end of had a pro-lifer committed it.

Second, “I don’t know what happened in the Gosnell case” – arguably the biggest abortion-related story of the year – is a pretty big admission from someone whose entire claim to fame is predicated on defending the killing of five-month-old babies.

Third, Davidson’s defense is disingenuous, since the Weekly Standard didn’t ask or claim anything about the Texas bill addressing the regulatory lapses that enabled Gosnell; they asked Davis to identify a substantive moral difference between the 23-week-old babies Gosnell killed and the 23-week-old babies she wants to let Texans keep killing. Which she couldn’t do.

If you are a woman who supports abortion rights and do not fit Erickson’s idea of what such a woman should look like – dreary, presumably – he will find a caricature for you: a silly girl who wore the wrong outfit, the one a man didn’t want to see her in. And then, when people get angry, you can say that your original stereotype was correct: feminists are humorless, girls don’t get jokes.

Never mind that the tweets said nothing about women generally, or what pro-aborts “should look like”; if you are male and oppose abortion, it is an article of leftist faith that you are by definition sexist. It’s heresy to entertain the very possibility that our motives might really, simply be what we say they are.

After the Texas bill passed, he tweeted, “Dear liberals, go bookmark this site now,” and linked to a store that sold coat hangers. Coat hangers were what some women used in the pre-Roe era, when they were desperate to end a pregnancy, risking their lives. For that reason, they have become a symbol; some of Davis’s supporters carried them. Erickson, in a non-apology “to the kid killing caucus” for the hanger tweet, wrote, “I was mocking you and your outrageous hyperbole and lies.” Women’s deaths are hyperbole only if you don’t value their lives. As for “lies,” even Erickson acknowledges that women died from illegal abortions back then; he says it was just a few dozen a year. And what’s that to him?

That’s a crass way to make the point, but to suggest it’s evidence that pro-lifers “don’t value their lives” is borderline libel. As Amy Davidson knows full well (because I simply don’t believe it’s plausible for her to sincerely believe her malicious inferences), “hyperbole and lies” doesn’t minimize the worth or tragedy of those who did die; it quite literally means that the pro-abortion narrative about them consists of hyperbole and lies. As we’ve addressed before, the pre-Roe tallies of maternal abortion deaths have been largely fabricated and inflated, and the decline among actual deaths had nothing to do with legalization.

Still, what Erickson appears to find most ridiculous is that women are so earnest and think that their stories and dilemmas are relevant to this debate.

For the sake of argument, let’s momentarily accept that the tweets were grossly unfair, demeaning, and patronizing to Davis. How in the world does a remotely rational, competent person make the leap from insulting a particular woman to insulting womankind as a whole? How do you get from I consider Wendy Davis a fool to all female perspectives are worthless? You simply don’t – if you’re honest.

Erickson’s other response is that if liberals get to call Sarah Palin Caribou Barbie (Maureen Dowd did), then they can’t complain. This assumes a parallel between “Caribou” and “Abortion,” which is hard to see. Abortion, despite what Erickson may think, is not a guise or a fashion, a destination like Malibu or an aspiration like astronaut.

No, it recognizes the obvious: “Caribou Barbie” meant “Sarah Palin is a bimbo.” That’s exactly what liberals meant by it, yet we weren’t supposed to take that as evidence of misogyny, because for much of what passes for “feminism” these days, the “pro-choice” label is a get-out-of-jail-free card. “Caribou Barbie” revealed nothing about how liberals see women other than Palin, yet “Abortion Barbie” is putting down an entire sex. If you say so, Amy…

As for “abortion” as Davis’s descriptor, is defending it not her sole claim to national fame? Is it not the issue she thought worthy of a filibuster, framed as a desperate crusade for all that is good and true?

If it is a shorthand for anything, it is for what can be the hardest moment in an woman’s life. Perhaps he is used to treating all of this as a political game, making paper airplanes out of court decisions, but reproductive rights are not childish things.

That’s right, it’s not a childish thing. It’s murder. Davis and Davidson aren’t defending some innocuous, no-strings-attached right to “reproduce”; they’re championing the murder of helpless, living human babies, who’ve been developing for five months – during which, yes, there is objective scientific support for the possibility that they feel the pain of being torn limb from limb, or having their skulls crushed. At the command of their own mothers, in whose care children are supposed to be at their safest.

So yes, please go on about “hard moments” and “political games.” Tell us more about how the real crisis is how it’s not quite easy enough to have this done. Continue explaining the heartlessness of a blogger saying mean things about a defender of this practice.