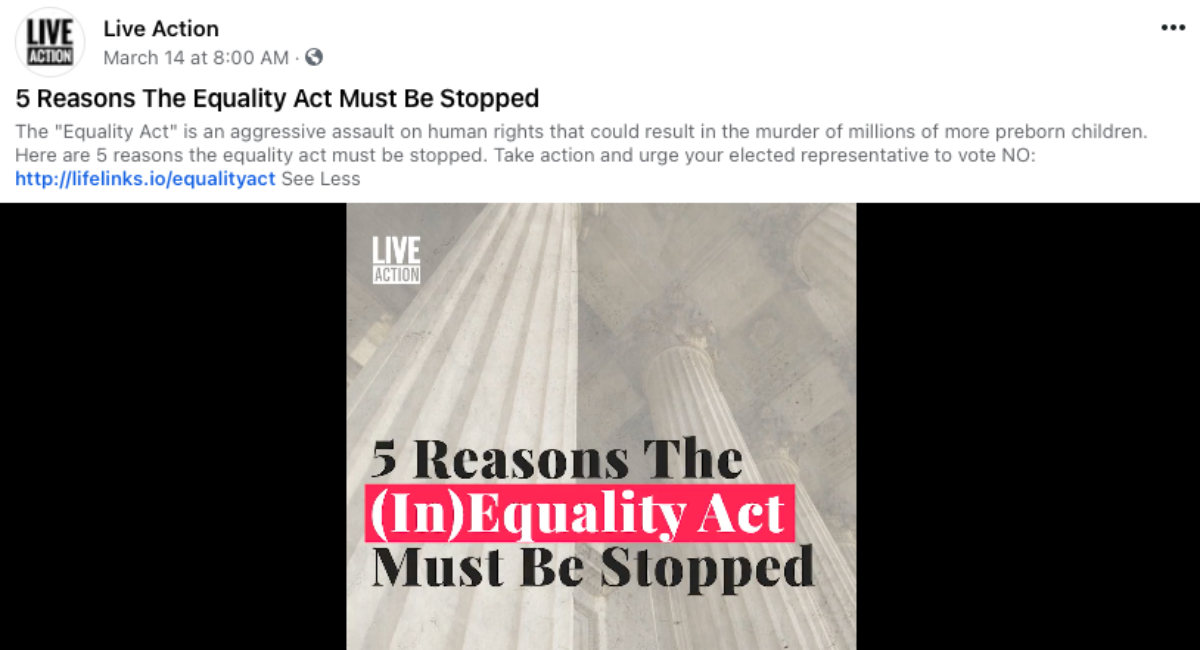 Media Matters along with Pink News and Yahoo News recently ran articles claiming that a Live Action Facebook ad sharing the dangerous and deadly fallout that will occur if the Equality Act is passed is erroneous and “anti-LGBTQ.” This is a complete misrepresentation of Live Action’s ad, which points out the hidden truth — that the Equality Act will remove rights from medical professionals and lead to the deaths of even more preborn children through abortion.

An aggressive assault on human rights

The websites claim the Live Action Facebook ad (using the video and wording embedded below) depicts the Equality Act as “an aggressive assault on human rights” — and it does. But they failed to quote the whole statement. Live Action’s full sentence reads:

[I]n reality, the “Equality Act” is an aggressive assault on human rights, especially those of women and preborn children.

Instead of including this portion of the statement, Media Matters and Yahoo News — the latter of which reprinted an original article from Pink News — eliminated half of the statement and cut and pasted words from the ad in what appears to be an attempt to mislead people.

While pro-abortion media outlets claim The Equality Act has nothing to do with abortion, this is false. The Equality Act’s premise is that women aren’t equal to men unless they can kill their children through abortion, and it redefines the term “sex” to include “pregnancy, childbirth, or related medical condition.” As reported by The Heritage Foundation, the Equal Employment Opportunity Commission and the Third Circuit Court have already each interpreted “related medical condition” to include abortion.

The Equality Act states, “Nothing in section 1101 or a covered title shall be construed to support any inference that any Federal law prohibiting a practice on the basis of sex does not prohibit discrimination on the basis of pregnancy, childbirth, or a related medical condition…” Therefore, no doctor would be able to refuse to participate in an abortion because that would be an act of discrimination based on sex, according to the wording of the Equality Act.

Section 6 of the Equality Act alters Section 601 of the Civil Rights Act of 1964 to read, “Prohibition against exclusion from participation in, denial of, benefits of, and discrimination under federally assisted programs on ground of race, color, sex, or national origin.”

Medical professionals could risk job loss and potentially face legal penalties if they consider abortion to be an unethical act and refuse to participate in it.

In addition, the Equality Act states that it will override the Religious Freedom Restoration Act, which means those who object to abortion or other procedures will have no way to defend their religious-liberty or conscience rights. The Equality Act states, “The Religious Freedom Restoration Act of 1993 … shall not provide a claim concerning, or a defense to a claim under, a covered title, or provide a basis for challenging the application or enforcement of a covered title.”

The truth is, abortion is not health care and is never medically necessary. A preborn child never has to be purposefully killed for a good medical outcome to occur. Even if the mother’s life is on the line, it is actually safer and faster for the mother to deliver the child alive by emergency c-section than to take the time to actively kill the baby prior to delivery — which can take days if the woman is in her second or third trimester. Preterm delivery with the intent to try to save the child’s life is not abortion. If the baby is delivered alive and is 21 weeks or older, doctors can attempt to save both lives. The purpose of an abortion is to end a pregnancy specifically by ending a human life.

Most OB/GYNs don’t commit abortions, and in an effort to expand abortion access, the abortion industry has been supporting laws that would allow non-physicians to commit abortions. The Equality Act, many fear, would force them to treat the killing of preborn human beings as “health care” and force their participation.

Taxpayers will also be forced to fund abortions through Medicaid programs, ensuring that every tax-paying American will be forced to participate in abortion in some way — either by funding it or by somehow participating in it.

Furthermore, mandating that Medicaid pay for abortion will lead to an increase in abortions. Studies have already shown that women who obtain taxpayer-funded abortions tend to have more abortions. Low-income women are already vulnerable to abortion and may feel they have no other choice but abortion if abortion is presented as free while raising a child is presented as financially burdensome.

“[W]omen are coerced into having abortions by their parents, by their partners, by their employers, and by the abortion industry workers, staff, and doctors,” explained pro-life activist Christina Bennett to Live Action News. “And so when you make abortion free [of cost to the client], you’re adding to that encouragement. You’re encouraging abortion when you make it free because, just in general, that’s a sales tactic, making something free. If something is free you’re going to consider it regardless of what it is. If someone says, ‘Do you want this? It’s free.’ You’re going to think, ‘Do I want this?’ So, for women who are already vulnerable, already under pressure to abort, it becomes this enticement.”

The Equality Act states that discrimination in employment includes health care. Under Section 7, it says it will amend Title VII of the Civil Rights Act of 1964 to ensure the new definition of “sex” is taken into account. In addition, by expanding the definition of “public accommodations” to include “establishment that provides health care,” the Equality Act will force employers who offer health care to pay for abortions through their health insurance programs.

The Live Action ad clearly states, “Instead of treating men and women as equal, the Equality Act tries to erase the biological reality of the differences between men and women altogether. This would disproportionately impact women.”

By amending the Civil Rights Act, the Equality Act states the segregation based on “sex (including sexual orientation and gender identity),” would be prohibited. Spaces previously set aside as single-sex spaces will therefore be open to both sexes under the Equality Act which adds gender identity rules to Title III of the Civil Rights Act on public facilities, public accommodations in Title II, and federal funding in Title VI.

The Equality Act attempts to erase or ignore biological differences between men and women, and erase gender by acting as if pregnancy is a deviation from the norm (with abortion as a “treatment” for this “condition”) and by acting as though women and men are supposed to be physically the same.

The Equality Act wrongly implies that because biological men do not become pregnant, biological women shouldn’t have to endure pregnancy, either — and therefore should be able to rid themselves of their children through abortion as so many men have abandoned theirs. Abortion would be considered a treatment for the disease of pregnancy, but pregnancy is not a disease.

As the Live Action ad states, “True equality means that all innocent human beings, from conception to natural death, have an equal right to protection from murder.” And they should be protected from forced participation in murder as well.