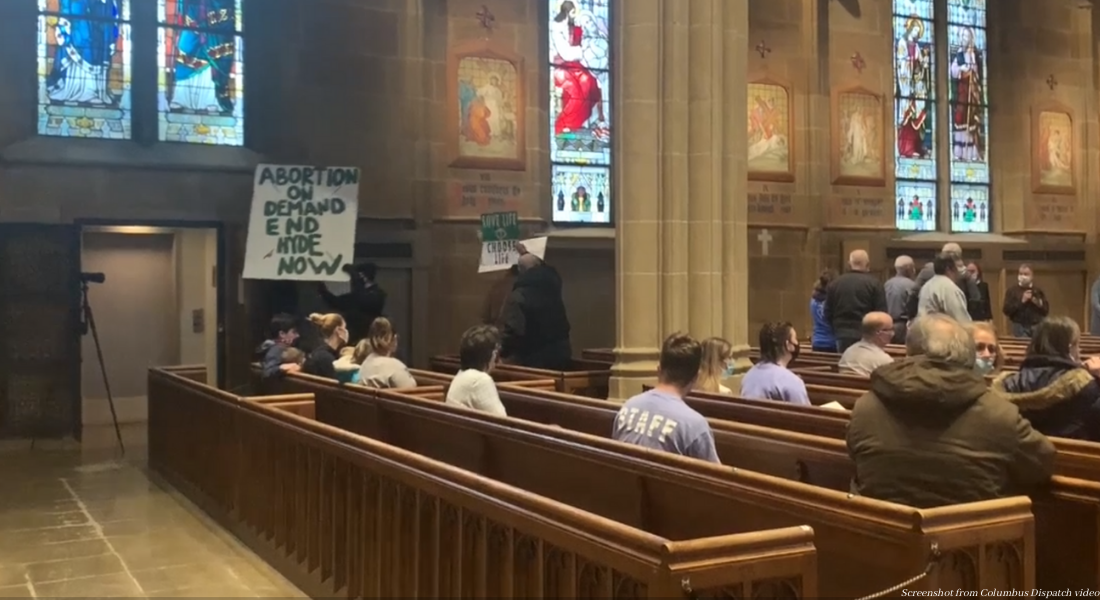 Three pro-abortion protestors were arraigned on Friday for illegal actions carried out during their disruption of an annual Respect Life Mass at St. Joseph Cathedral in downtown Columbus, Ohio, in January.

Jordyn Close, 24, Michelle M. Davis, 39, and Mason Hickman, 24, each face misdemeanor charges including disorderly conduct and criminal trespass. Each of them pleaded not guilty. Their hearings are scheduled for dates in March and April. A fourth protestor, Anne Morrice, 35, faces those misdemeanor charges as well as a charge for criminal damage because she knocked over a table when attempting to run to the pulpit. She will be arraigned on March 19.

According to the Catholic News Agency, the protestors chanted “Two, four, six, eight, this church teaches hate” and “Fund abortion, not cops.” Another sign read, “Abortion on Demand. End Hyde Now” in reference to the Hyde Amendment, which prevents the federal taxpayer funding of abortion through programs like Medicaid.

“Even our pro-choice city attorney recognized that the rule of law must always apply and our churches are sacred institutions,” said Mike Gonidakis, president of Ohio Right to Life. “Menacing others and yelling vulgarities at a church service at which young children were present is both unlawful and unconscionable… Such displays of irreverence towards women and children practicing their faith is tragic and uncalled for.”

Eight pro-abortion protestors in all stormed the cathedral during the morning Mass on January 22, the 48th anniversary of Roe v. Wade, the Supreme Court ruling that legalized abortion in the United States. No arrests were made at the time of the protest, according to George Jones, spokesman for the Roman Catholic Diocese of Columbus. However, Columbus Police Sgt. Dan Edelsberg said charges were requested from the city attorney’s office and were filed at a later date.

“As with every incident, evidence must be collected and reviewed for each defendant,” said Meredith Tucker, spokeswoman for the city attorney’s office. “After evaluating the available evidence, including surveillance videos, witness statements, and more — these were the four defendants we had sufficient evidence to move forward with charges.”

According to The Columbus Dispatch, the abortion advocates marched and chanted while holding signs about the so-called right to abortion being under attack before they were escorted out of the church by police and diocesan officials.

Bishop Robert Brennan, who presided over the Mass, said in a statement that he “appreciates the action by the Columbus City Attorney’s Office to cite those individuals who interrupted the Respect Life Mass.” He also thanked the Columbus Police Department for its “rapid response.”

“We are also thankful for the proactive concern shown by our city’s leaders in supporting people of faith and their right to worship in peace and free of disruption,” he said.

The Ohio Religious Coalition for Reproductive Choice, however, said in a statement that they “stand firm in our continued support of the pro-abortion activists” calling the protest “brief” and “peaceful.”