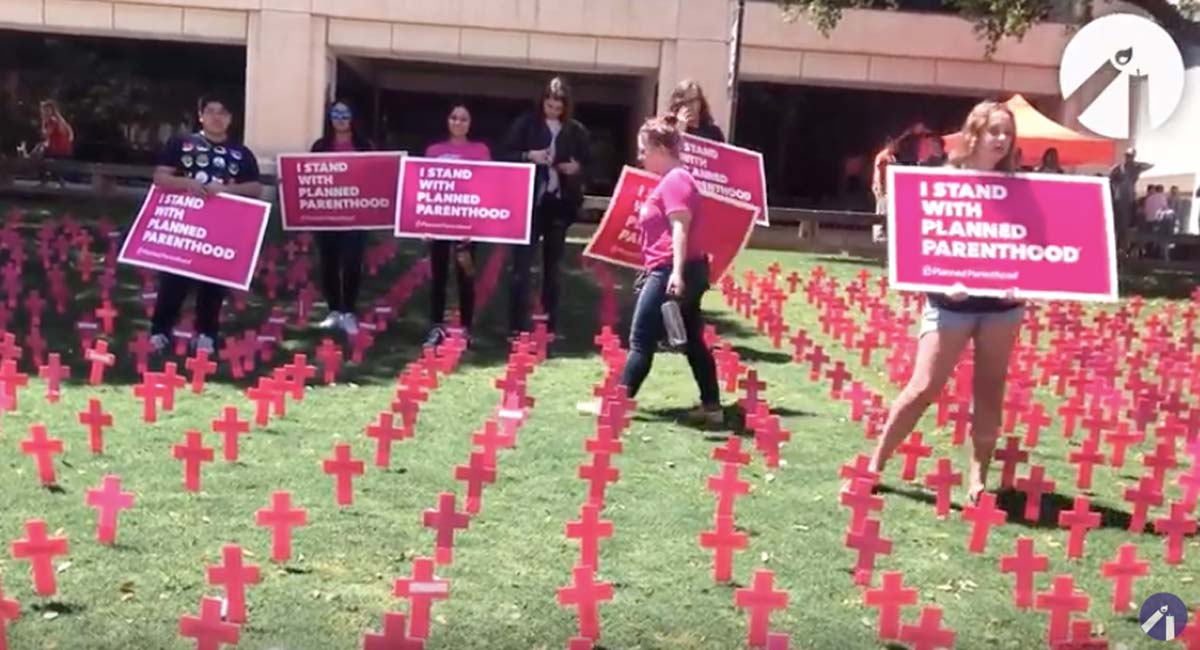 The protesters seemed to hope to disrupt the display with as much ostentatious vulgarity as they were able, meant to shock and offend those they didn’t agree with.

The incident, which was caught on video, shows several parts of the Planned Parenthood supporters’ protest. The protesters can be seen yelling about how much they loved abortion, and one girl called having sex and aborting the baby her “number one kink.”

“Look, there’s mine right there!” said one protester, according to Students for Life (SFL), while marching across the display and pointing to one of the crosses.

At one point the same protester shouted “I can’t hear y’all!” over the SFL representative who attempted to talk. Another protester can be seen approaching the SFL booth to cover SFL’s camera with an “I Stand with Planned Parenthood” sign.

“I’m so sorry that you have decided to succumb to the system of patriarchy,” said a protester to the female students.

“What if we kissed in the fetus graveyard?” announces one female protester to another female protester as their cohorts giggle. “Hey hey, what’s that sound? All the fetuses are in the ground,” they sang and chanted.

Sarah Zarr of Students for Life explained how the pro-abortion protest evolved. “Some of the members came to talk to us, but would not have dialogue they just wanted to shout their points at us,” she said as reported by SFL’s website.

A few members did speak with us but when they couldn’t think of a response to what we said would get mad and walk off. Then a bunch of them came with signs and stood in front of our display shouting that we didn’t have the facts. Later they came and stood in the middle of our memorial in the grass with their signs and a girl ran out into the grass yelling, “I’ve had an abortion.”

That wasn’t the worst of it they continued on by mocking our memorial that represented the 911 lives lost due to the abortions Planned Parenthood commits every day and the 911 women’s and families lives that were impacted by those abortions. Saying things like, “Hey, Stop, what’s that sound all the fetuses are in the ground.”

Students for Life is no stranger to harassment and vandalism. Around the same time, a similar display at Southern Illinois University-Edwardsville was painted over, and a sign stolen. At the University of Texas at Austin event, SFL’s materials were stolen and thrown in the gutter.

The aggressive harassment of pro-lifers is not just isolated to SFL. Pro-abortion protestors attempted to silence pro-life activist Ryan Bomberger at University of Texas at Austin by throwing a smoke bomb into the room. In Kentucky, a pro-life sidewalk counselor was knocked to the ground and suffered a skull fracture and a broken femur.