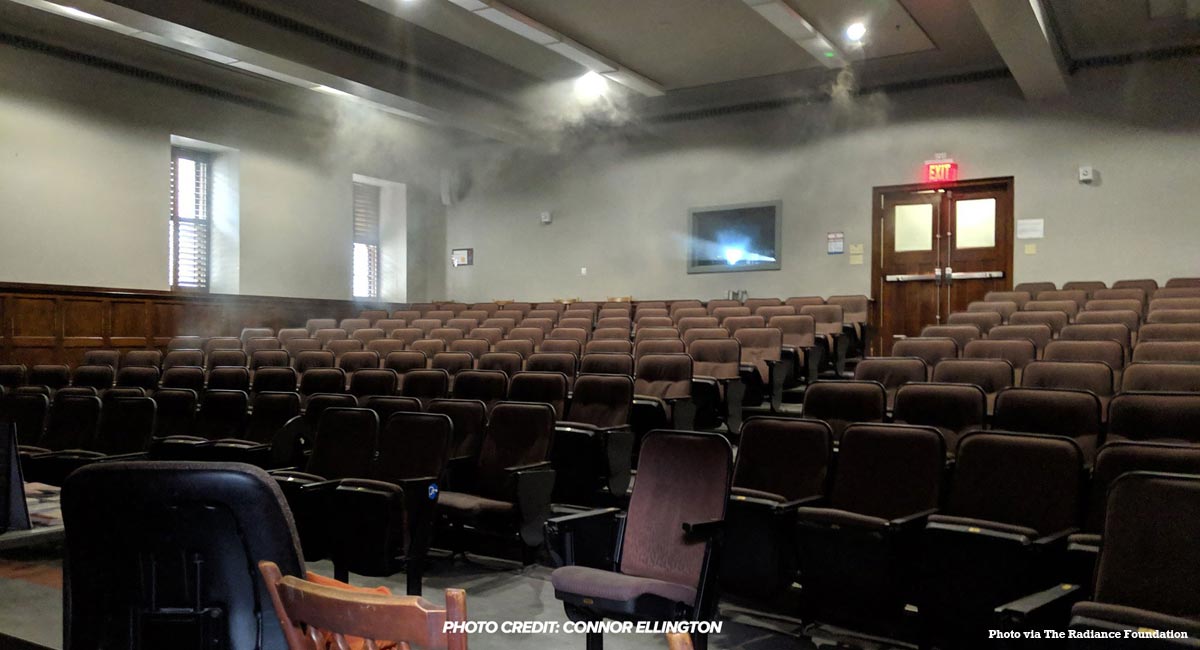 (The Radiance Foundation) Liberal activists just hate it when people can speak freely. Those who incessantly accuse others of “hate speech” are, themselves, haters of speech. So-called social justice warriors can’t handle it when people have a different and well-informed opinion. So, if you can’t (intellectually) beat ‘em, smoke ‘em out.

That’s what happened at last night’s Young Conservatives of Texas’ and Trotter House (an amazing pregnancy center located on campus) event at University of Texas at Austin. They had invited me, as someone who was conceived in rape yet adopted and loved to present “Should Have Been Aborted”. The multimedia talk that illuminated a broken worldview that declares the most vulnerable humans are not equal. As is expected on college campuses, whether secular or Christian, flyers got ripped down as soon as they went up. Too many students would rather fear than be challenged to think. Academic institutions have become safe spaces that increasingly serve more as prisons of controlled thought rather than places of unrestricted learning.

About twenty minutes into the presentation the fire alarms sounded. I thought it was just a random test. Nope. It was liberalism. The whole building was evacuated, and we were forced out onto the sidewalk across from Gearing Hall. In a matter of moments there were fire trucks, police and smoke. Authorities confirmed someone targeted our event as evidenced by this photo taken by student, Connor Ellington, after everyone else had exited.

Thank heaven no one was hurt, but freedom takes a serious blow every time liberal activists try to shut down free speech.

This attack has become the norm for conservative, prolife and/or Christian groups at colleges and universities nationwide. There are no such actions by these groups toward the Left…ever. They don’t try to shut down their events. They don’t verbally attack them with f-bombs or try to silence them with smoke bombs. And college administrations largely look the other way, as Wheaton College leadership did when a handful of staff and student government leaders denounced my presentation on “Black Lives Matter In and Out of the Womb” as “offensive rhetoric” that made “students, staff and faculty of color feel unheard, underrepresented and unsafe on campus”. This is the poisonous culture of intolerance that runs rampant in “higher education”. It’s academic terrorism.

Cowards use fear and violence. Their aversion to truth renders them incapable of meaningful discourse or finding out their opinion may be—gasp!—wrong.

When it comes to abortion, progressives are fatally wrong.

But they celebrate their ignorance and rejoice when they get to silence the truth. The Radiance Foundation, over the past 10 years, has launched over 500 billboards in cities across the country, addressed thousands on college campuses, led Capitol Hill briefings, and published hundreds of articles providing context and clarity to culture-shaping issues. Many have tried to silence us. Many distort and demonize us. Some have threatened us with lethal violence.

We will continue to work with other pro-life, pro-family, pro-liberty organizations, to boldly speak truth and love to counter a culture of lawlessness and death. We’ll continue to expose Planned Parenthood’s corruption, the hypocrisy of the pro-abortion #BlackLivesMatter movement, the exploitation by evangelists of victimhood and the basic War on Common Sense.

Even the pro-abortion NAACP tried to sue us for exercising our constitutionally guaranteed First Amendment rights. We called them out, in a scathing article, for who and what they’ve become—The National Association for the Abortion of Colored People. Apparently, the NAACP couldn’t accept that (accurately) parodying their name is free speech. After two years in federal court, with Alliance Defending Freedom protecting our civil rights, we were victorious.

The attack on prolifers at UT Austin, trying to shut down desperately needed factivism, failed. We moved to another building and continued to event. There was nearly an hour of Q&A, giving anyone across the ideological spectrum an opportunity to challenge and be challenged in a civil and constructive way.

Editor’s Note: This article was published at The Radiance Foundation and is reprinted here with permission.