In a tweet to journalists, Physicians for Reproductive Health (PRH) announced its updated “Resource for Journalists Reporting on Abortion,” which includes biased abortion language to “ensure accurate and compassionate reporting.”

But the suggestions they proposed are anything but accurate, and even refer to the deliberate killing of a preborn child in the womb by abortion as “normal.” The suggestions also eliminate the long used term “abortionist,” eliminate the term “born-alive,” and refer to pro-life legislation as “extreme.” In addition, PRH (formerly called Physicians for Reproductive Choice and Health PRCH) is prodding journalists to stop using terms like pregnant “woman.”

PRH’s suggestions are below:

1) Refer to abortion as “normal,” “healthcare,” and “reproductive justice”

Abortion is the deliberate killing of a woman’s own preborn child, which is the antithesis of normal, and we know this instinctively. However, PRH’s website tells journalists, “Abortion is a part of the full spectrum of reproductive health care… That’s right, it’s normal. And should be talked about and treated as such.”

Citing a National Academies of Sciences, Engineering and Medicine (NASEM) study, which Live Action News previously noted was heavily written by and funded by abortion insiders, PRH also claimed, “All forms of abortion care are safe and effective.”

The group also cited the heavily debunked and regurgitated Turnaway Study, claiming, “People have many different reasons for seeking an abortion, all of them valid,” adding, “Research has also found that the overwhelming majority of people who seek abortions are confident about their decision, meaning that abortion should not be portrayed as an inherently difficult, complicated or tragic choice. All abortion stories should be presented as equally valid and treated with compassion.”

Except, the abortion industry dismisses all abortion stories which deal with regret, trauma, or abuse because those stories don’t match their narrative.

2) Refer to abortion bans as “extreme”

This kind of manipulation only benefits the abortion industry, which PRH represents.

“All abortion bans are extreme and dangerous,” the organization wrote. Unsurprisingly, PRH pushed for taxpayer-funded abortion and was critical of the Hyde Amendment, which protects federal dollars from paying for most abortions.

“Abortion care is health care. It should be covered no matter your source of insurance,” they wrote.

3) “Abortion doctor” or “abortionist” should never be used

PRH wants those they represent to be called “abortion provider” or “provider of abortion care” — not “abortionist.”

“The terms ‘abortion doctor’ or ‘abortionist’ should never be used; they are medically inaccurate and often used to stigmatize abortion providers and mislead people about their work,” PRH writes. “Physicians should always have their professional title ‘Dr.’ used.”

4) Only use the term “pregnant person”

When it comes to abortion clients, journalists should refrain from using the female gender.

According to PRH, journalists must now use terms like “pregnant person” or “people who have abortions” instead of “woman” and “other gender exclusive language.”

“Refer to ‘people’ not only ‘women’: The right to decide if, when, or how to have children is a human right, not just a woman’s right,” PRH wrote.

Physicians for Reproductive Health PRH abortion language – Say this not That

In place of terms like “heartbeat ban,” PRH wants media to use “six week abortion ban” or “near-total abortion ban.”

PRH then warned journalists reporting on the Texas abortion law (SB8) to not use “Handmaid’s Tale” or “underground railroad” so as to not conflate with efforts in “ending slavery.”

6) Refer to “late abortion,” but never use “late-term” or “born alive”

While state reports prove that babies are aborted up to birth and are sometimes even born alive, the abortion industry and PRH don’t want the American public to be aware of this. PRH has instructed journalists to instead use terms like, “abortion later in pregnancy” or “later abortion,” instead of “late-term abortion”  or “born-alive.”

Surprisingly PRH got one point correct — that an abortion for the reason of a disability is rooted in ableism.

[Do] Not portray abortions that happen because of a fetal disability or anomaly as ‘better’ than other abortions: The idea that abortion is more acceptable in cases where the fetus would not develop in an able-bodied way is rooted in ableism—the mistreatment, prejudice, and discrimination towards disabled people and disabilities.

This tactic allows those who want to ban abortion to push legislation that further restricts abortion on the basis of that specific medical necessity, while also banning abortions in most cases and only allowing it in the most dire circumstances.

PRH also suggested that journalists “[p]rovide historical context about the reproductive coercion that disabled people have experienced in the U.S.: As many as 70,000 disabled people, people of color, and women were forcibly sterilized in the 20th century as a result of eugenicist ideologies,” they wrote.

Unfortunately, what PRH conveniently left out was the fact that many of the proponents of forced sterilization were also outspoken advocates of Planned Parenthood, eugenics, and even abortion.

When it comes to the abortion pill and illegal abortions, PRH also has suggestions:

Apparently obtaining an abortion illegally is no longer a safety issue for PRH and others.

“Procedural abortion” or “aspiration abortion” should replace “surgical abortion,” according to PRH.

The move to manipulate abortion language and control the narrative follows recent changes made by various abortion-favorable media outlets.

Last year, George Soros-funded NPR updated its style guide, which according to the Daily Caller, “explicitly instructs reporters to adopt opaque or sanitized terms and Planned Parenthood talking points, while avoiding any terms that could come across as pro-life or inadvertently humanize the unborn.” In addition, biased abortion language changes were seen in the AP Stylebook published by The Associated Press, the Guardian, and others.

In addition to PRH, others are pushing language changes. The Guttmacher Institute’s Senior Communications Manager, Lauren Cross, recently tweeted the organization’s intention to update abortion language. She wrote, “After years of internal lobbying, @Guttmacher has officially adapted “anti-abortion” instead of “antiabortion” in the official style guide for publications moving forward. There are many people to thank for this development.” On Twitter, abortionist Jen Gunter called for the term “unborn child” to be removed from the New York Times “style guide.” 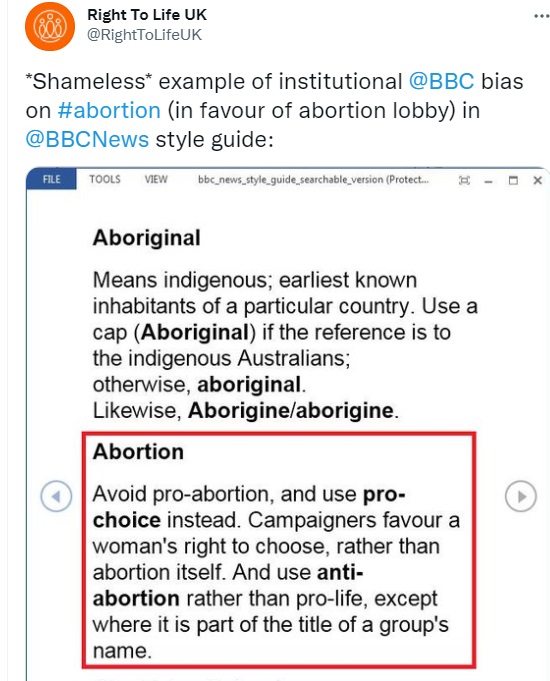 PRH is funded by the Packard Foundation, original investors in the abortion pill manufacturer, Danco. PRH is also funded by the Open Society Foundations (Soros), Bill & Melinda Gates Foundation, TARA health Foundation (THF), Hewlett Foundation, Rockefeller Foundation, and others — a point not mentioned in their journalist “resource.” PRH and those it represents and trains within the abortion industry have much to gain by partnering with pro-abortion media to diminish the truth and manipulate the narrative in a biased way.