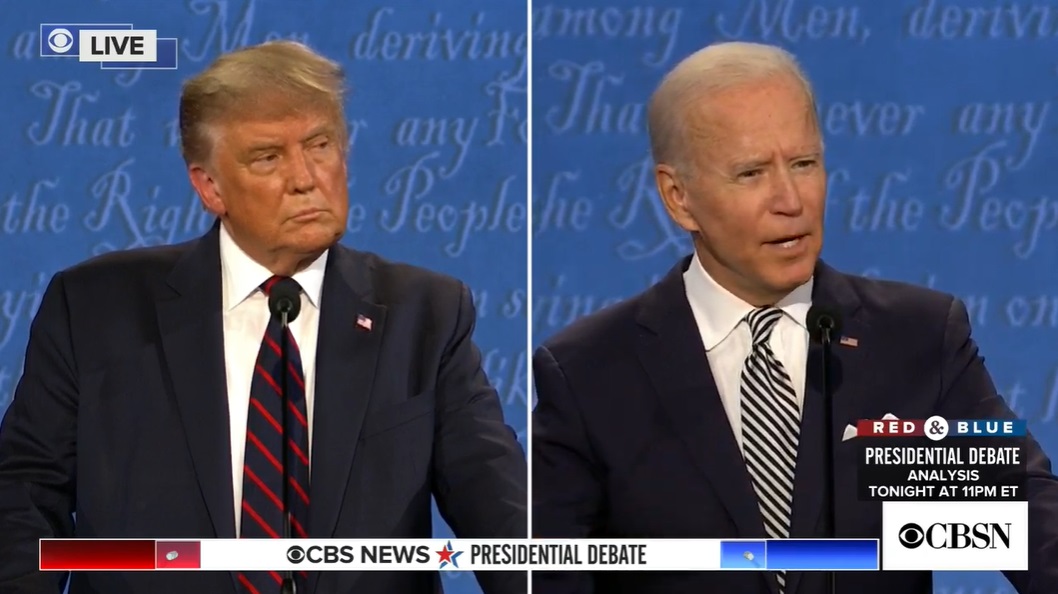 Fox News commentator Chris Wallace moderated the event and selected the questions that would be asked. The overall feel of the debate was combative, and at times it seemed that Wallace had lost control of the debate. But it also appeared to some, including conservative political commentator Ben Shapiro, that Wallace transitioned “from moderator to debater” at times rather than overseeing the debate.

Outside the debate hall, the group Created Equal gathered to send the message that abortion is a top concern for pro-lifers. A banner the group commissioned to fly overhead read, “Unborn Black Lives Matter.”

The first question of the debate seemed to have the potential of raising the topic of abortion, as it centered on Amy Coney Barrett’s nomination to the Supreme Court during an election year. Trump stated that his decision to move ahead with the nomination was because “[w]e won the election and have the right to do it,” claiming that he believed a Democratic president would do the same in his position. Biden suggested that the “election has already started” and that “we should wait to see what the outcome of the election is” before voting on the nomination. In response, Trump stated that he was elected as President for four years, not three.

Biden stated that he is “not opposed to [Amy Coney Barrett]; she seems like a really nice person….” However, he suggested that if Barrett is confirmed, “women’s rights” will be “fundamentally changed,” most likely referring to the Supreme Court’s 1973 Roe v. Wade decision, which legalized abortion throughout the United States.

Trump quickly responded by saying that Biden does not know Barrett’s position on Roe v. Wade. At that point, Wallace interrupted the exchange, telling the candidates that he would “come back to Roe v. Wade.”

A question Wallace posed to Biden asking whether he would consider “packing” the Supreme Court in the event that he is elected went unanswered, with Biden admitting, “I’m not going to answer the question.” Pro-life group Susan B. Anthony List tweeted in response, saying that packing the court with more than nine Justices would “create a blockade against lifesaving #ProLife laws.”

Biden, who has stated he supports Roe v. Wade and favors eliminating the Hyde Amendment (which currently prevents federal taxpayer dollars from paying for abortions) added, “The point is that the President also is opposed to Roe v. Wade. That’s on the ballot as well – in the court.”

Biden’s remarks on “women’s rights” and Roe did not sit well with pro-lifers on Twitter.

Interesting how Biden brings up "women's rights" but doesn't invoke Roe or abortion. Pro-abortion extremism is a loosing issue and Dem internal polls show it. #Debates2020

Live Action founder and president Lila Rose echoed the same sentiment, noting that abortion is a losing issue among various groups of people.

At one point, Biden stated, “I am the Democrat Party now. The platform is what I approved of.” Although Biden was not specifically addressing abortion with that statement, the Democratic Party’s platform reads with regard to abortion:

We believe unequivocally… that every woman should be able to access… safe and legal abortion. We will repeal the Title X domestic gag rule and restore federal funding for Planned Parenthood….

Democrats oppose and will fight to overturn federal and state laws that create barriers to reproductive health and rights. We will repeal the Hyde Amendment, and protect and codify the right to reproductive freedom….

The debate moved from the Supreme Court to health care, to taxes, to climate change, and to racism. Wallace failed to ask anything about abortion even with regard to “health care” — such as whether candidates believed Planned Parenthood should be defunded of its $616.8 million in taxpayer dollars annually — or with regard to the science of prenatal human development.

In the end, Wallace failed to ask any questions about Roe v. Wade, after stating that he would. It is possible, however, that a lack of time contributed to this decision.

“2,400 babies were killed today, but there was not a single question on what @realDonaldTrump  or @JoeBiden  would do to prevent another 2,400 from being slaughtered tomorrow,” tweeted Lila Rose.