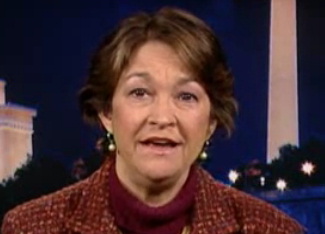 Terry O’Neill, President of the National Organization for Women is obviously running scared. She sees that the pro-abortionists are starting to lose their grip on the minds of America and the only option she has left is to lie through her teeth. Why else would she write a piece for the Huffington Post that is packed with deception about the proposed mandatory ultrasound laws (recently approved in Texas and Virginia) and Republicans?

Terry O’Neill, President of the National Organization for Women is obviously running scared. She sees that the pro-abortionists are starting to lose their grip on the minds of America and the only option she has left is to lie through her teeth. Why else would she write a piece for the Huffington Post that is packed with deception about the proposed mandatory ultrasound laws (recently approved in Texas and Virginia) and Republicans? Lie #1: She writes, “In this right-wing utopia (of the Republican party), women will no longer be able to exercise the right to control their bodies, plan their families or safeguard their own health. The church and the state will tell women what is best for them, and religious entities’ “liberty” will consistently trump individual women’s right to live and work free from discrimination and in accordance with their own religious and moral beliefs.”

Truth:  Women will always be able to control their own bodies, plan their families and take care of their health no matter who the president is. Women will also be allowed to live and work free from discrimination, which she says is a right that would disappear. This is the United States after all. Republicans simply want to show women what abortion is before they take the life of their child and live to regret it. Hopefully soon, the one “right” women won’t have is one that allows them to kill their unborn, whom are actually completely different people with their own body deserving of their own right to live.

Lie #2: O’Neill claims that, “ultrasounds are rarely medically necessary prior to an abortion, (and) these laws exist to demean the woman and make the procedure more expensive to boot.”

Truth: Under the mandatory ultrasound laws that many states are considering, women undergoing abortions must be offered the opportunity to view or hear a description of the ultrasound image.What O’Neill fails to say (because I’m sure she knows) is that ultrasounds are actually already required before an abortion. In fact, in 2000 pro-abortion researchers surveyed staff at 113 Planned Parenthood affiliates and independent abortion businesses, and  99% of the abortion facilities said that they always or sometimes perform an ultrasound in association with surgical abortion. Adrienne Schreiber, an official at Planned Parenthood’s Washington, D.C. regional office, confirms this saying, “That’s just the medical standard. To confirm the gestational age of the pregnancy, before any procedure is done, you do an ultrasound.”

Lie #3: She writes, “But the most disturbing aspect of these laws is that in the vast majority of abortions, which occur far too early in pregnancy for an external ultrasound… to produce an image, the ultrasound must be transvaginal — i.e., a long wand-like ultrasound probe must be inserted deep into the woman’s vagina. This is, quite simply, state-sponsored rape.”

Truth: Equating a transvaginal ultrasound, which pregnant women undergo daily, to rape, is absurd. It diminishes the suffering of every person who has ever been sexually abused. Besides this, women who undergo abortions are already receiving ultrasounds.  According to Schreiber, Planned Parenthood requires women give consent for abortion procedures, including the ultrasounds and if the women won’t consent to the ultrasound, the abortion cannot take place. No ultrasound, no abortion.

Additionally, if O’Neill thinks transvaginal ultrasounds are equal to rape, wouldn’t an abortion be one too? How does she think an abortion is performed? Dilators, forceps, and uterine curette are just a few of the tools inserted into the women’s uterus in an abortion in order to kill the baby and remove her body parts. A manual vacuum aspiration is literally used to aggressively vacuum the baby out. That seems much more traumatic and invasive (not to mention deadly) than a transvaginal ultrasound.

O’Neill claims that ultrasound laws are “a violation of a woman’s right to bodily integrity and an ugly intrusion on her right to choose to terminate a pregnancy.” In reality, ultrasounds are already happening with consent. The only difference is now women must be offered the opportunity to see the ultrasound image of their child or hear a description of it. She can refuse to look, but if she says yes, it just might save her baby’s life. And that’s something abortion providers just can’t risk or afford.