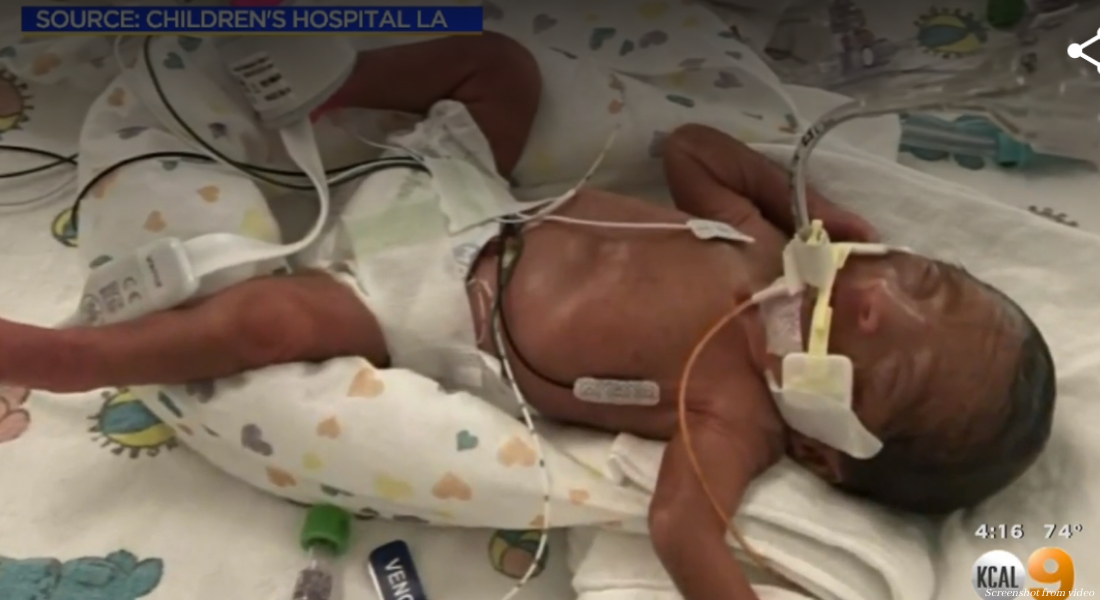 A premature baby weighing barely two pounds at birth has overcome not only the challenges that come with prematurity but a life-threatening heart defect as well, thanks to pioneering doctors at Children’s Hospital Los Angeles willing to try a groundbreaking new surgical intervention.

Alejandra Romero went into labor early and delivered her son Alex at just 26 weeks. He weighed only two pounds and one ounce, and his premature delivery was a major shock. Romero told PEOPLE that just two weeks before Alex was born, her ultrasounds had come back completely normal. But then, on October 26, she suffered a premature rupture of her amniotic sac, and was forced to undergo a C-section.

“It was very difficult. I didn’t get to hold him for a while,” she told PEOPLE. “When you’re pregnant, you think you’re gonna have a healthy pregnancy and take the baby home, but in my case, it was different.”

Premature babies often are at high-risk for a number of health conditions, but doctors saw some warning signs that Alex might have a heart defect as well.

“They noticed his oxygen saturation, which is the level of oxygen in the blood, was not very high, so they proceeded forward with an ultrasound of the heart,” Dr. John Cleveland, a pediatric heart surgeon, told CBS LA. From there, they discovered that Alex had a condition known as “total anomalous pulmonary venous return,” in which oxygenated blood does not return to the left atrium of the heart as it should, and instead, goes to the right side of the heart. This essentially causes the heart to become overworked, and often leads to blockages in the pulmonary veins, causing a backup of blood in the lungs. The blood leaving the heart typically has less oxygen than it is supposed to. It’s a rare, and life-threatening, condition.

“Seeing him so small was heartbreaking,” Romero told CBS LA. “I had to mentally prepare myself in case worse comes to worse.”

But thankfully, Alex made his way to Children’s Hospital LA and Dr. Cleveland, who felt sure that he and his team could manage the surgery needed to save Alex’s life. If the heart defect was not treated, Alex would experience organ failure and eventually, death.

“Alex is one of those situations where we had an opportunity to do something different and to really push the limits of what’s possible in order to get an outcome,” Cleveland told PEOPLE.

Unfortunately, Alex was too small to operate on at first. And to make matters worse, his veins were blocked, and blood wouldn’t return back to his heart. So Dr. Sarah Badran, an interventional cardiologist, identified another way to get oxygenated blood to Alex’s heart. Badran opened a vein in Alex’s liver and placed an adult stent in it, allowing blood to flow properly. According to CBS LA, it’s a procedure that has only been performed 10 times across the entire globe.

“It was one of those things where we weren’t really sure how things would turn out,” Cleveland said. “We really had to figure out a way to get creative to get him through.”

That procedure was successful and bought Alex the time he needed to grow bigger and stronger so Cleveland could perform life-saving heart surgery on him. For that procedure, Alex’s body was cooled to 64 degrees Fahrenheit to stop his blood from flowing so Cleveland could operate on his heart, which was the size of a grape. His heart was lifted out of his body, and his unconnected veins were successfully reattached.

“It really offers such an incredible opportunity to kind of make these children whole, and fill the gaps where the families would have been kind of shattered,” Cleveland said. “There’s something incredibly satisfying about that and fulfilling about that. Whenever I open the chest of a really small child, I always take a moment… because you oftentimes lose perspective for how small things are. It’s so incredible that we’re here, from a scientific standpoint, to be able to do things like that and do it with confidence.”

Since then, Alex’s weight has skyrocketed to over five pounds and he doesn’t even need a breathing tube. Best of all, his parents are finally able to hold him.

“I want him to be great,” his dad, Chris Romero, said to CBS LA. “I want to give him the opportunity for him to do what he wants to do in life.” Alex will be able to go home next week, and Dr. Cleveland has his own special hopes for him.

“I hope that scar serves as a reminder of God’s grace,” he said, “and that he can look back with gratitude for his life.”