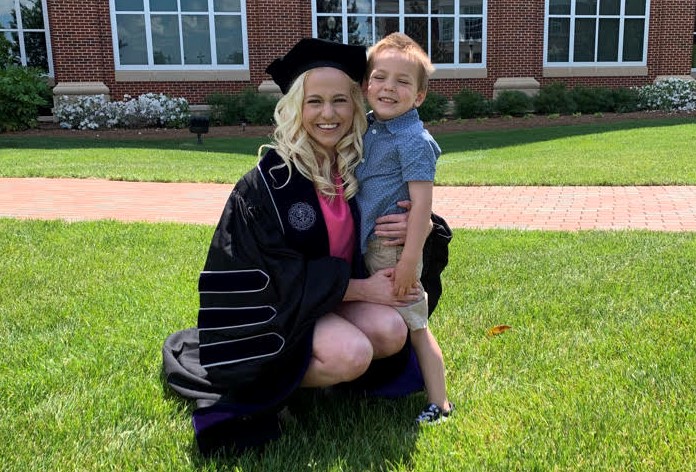 (Pregnancy Help News) Brittany stared with disbelief at the pregnancy test in her hand. It was positive. Fear ran rampant throughout her body.

This wasn’t part of the plan! She was too young to have a baby! She was still in college; she wanted to be a pharmacist! She couldn’t provide for a child!

Maybe an abortion. She could just go in, have it done, and get on with her life as if it never happened, right?

“Throughout that day, I thought more and more about it,” she recalled. “I Googled everything, so I decided to look up what occurs during an abortion, as well as the physical and emotional effects.”

Stumbling onto the truth

Her research led to her Abort73.com, a site where people share their abortion testimonies.

“I saw a common theme among the testimonies on this site: I realized I made a mistake, but it was too late. Women in their 60s posting about the abortion they had in their late teens/early 20s. The pain, heartache, and regret they feel on a daily basis, decades after having their abortion,” Brittany said.

“As humans, we make mistakes on a daily basis,” she continued. “We learn from our mistakes and most of the time we are able to fix our mistakes. Having an abortion is a mistake we can’t fix or ‘undo.’ Once it’s done, it’s done.”

As Brittany took in these stories, she felt her heartbreaking.

“I knew that if I had an abortion, I would be haunted by it forever, like these women,” she said. “Thankfully, I gave myself some time to think through all of the consequences before rushing to get one.”

Getting that first look

This revelation was not welcome news to her boyfriend and father of her unborn child. When Brittany had first approached him with the idea of terminating the pregnancy, he had expressed relief and support.

But the idea continued to feel worse and worse to her.

“If I had an abortion, I knew I would spend every single day for the rest of my life thinking of all the ‘what-ifs’ and wondering what could’ve been: Was it a boy or girl, what would (s)he look like, what would my life be like, (s)he would be one, two, three, etc. years old right now,” Brittany said. 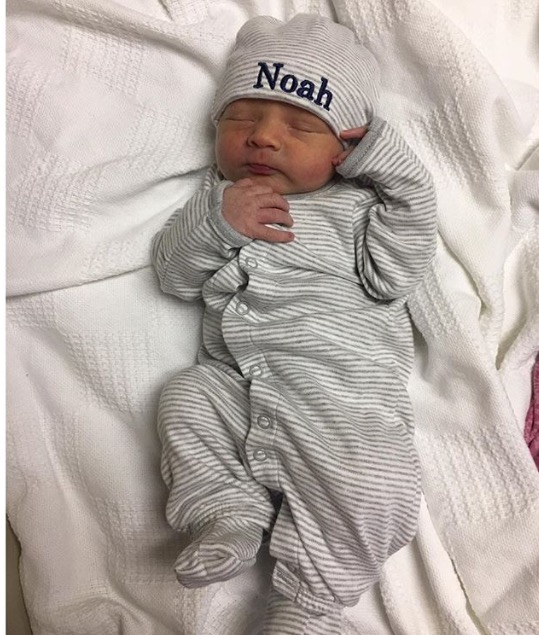 The next day, she told her boyfriend about her doubts.

“He was upset,” she recalled. “He tried to change my mind with the initial fears I had.”

But she was armed with an idea.

“I remembered that the mom of a girl I cheered with owned a pregnancy center just 15 minutes from campus,” Brittany said. “I talked him into going with me, to explore our options and keep an open mind, hoping maybe this would change his mind.”

The pregnancy center, Hand of Hope, warmly welcomed the couple.

Hand Of Hope Pregnancy Centers is a group of North Carolina pregnancy help medical clinics among some 2,700 pregnancy centers nationwide that assist and support women and families.

“They talked with us about the pregnancy and assured us that this baby was no mistake. God planned for this baby to come during this period of my life,” Brittany said.

Any chances of Brittany having an abortion were gone when at the pregnancy center she was given an ultrasound to see how far along she was.

“I was only six weeks pregnant, but I remember seeing a flickering heartbeat on the screen,” she recalled. “Even though my baby wasn’t formed yet, the organ that keeps us alive, the heart, was beating so strong. I saw true love for the first time on that ultrasound screen.”

And that was it.

“I knew that it was my job to protect this baby, with or without the support from my (now) ex,” she said.

The family weighs in

It was time to speak with their parents, which would result in a dramatic decision.

Her dad was upset with the news but grateful she didn’t go through with an abortion, offering support whether she decided to keep the baby or go the adoption route. Her ex’s mother, on the other hand, wasn’t quite as kind.

“She asked me what my plans were,” Brittany recalled. “I told her that I wanted to keep the baby and continue school the following year. She laughed and said, ‘If you take a year off you won’t go back to school.’” 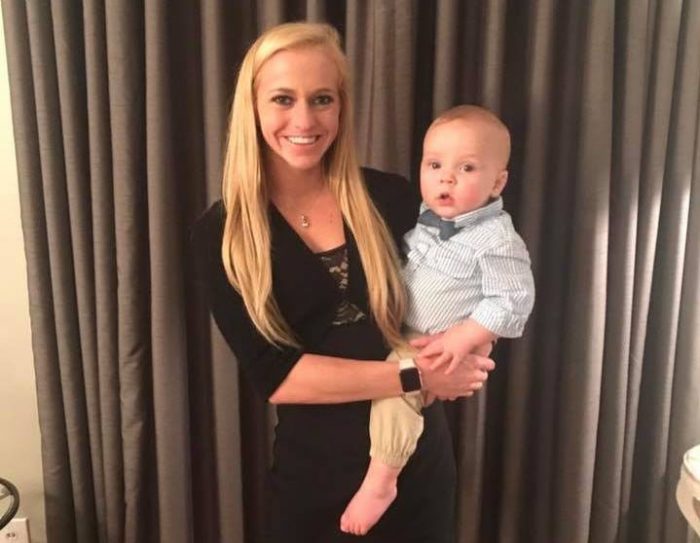 The elder woman was steadfast in the idea that adoption was the only way the child could have a decent life and told Brittany it would be “selfish” to keep the baby.

“While adoption is a great option for women, I knew in my heart that I was meant to raise this child,” Brittany said. “I had my parents’ support and stayed strong with my decision. I told his mom that I planned on keeping this baby, whether she supported me or not.”

As a result, Brittany never heard from her child’s father, or his mom, ever again.

“They cut off all communication with me,” she said. “Blocked me from everything and continued on with their lives. While this was hard, looking back on it now, I’m glad they did. For the remainder of my pregnancy, I was surrounded by support from my family, without the pressures of abortion/adoption that came from his side of the family.”

Brittany had lost her relationship, but now it was time to roll up her sleeves and get to work.

Although she had already taken all of the classes to qualify for pharmacy school, she still had to take the required entrance exam, the PCAT, and complete the necessary application materials.

“I remember walking in to take the PCAT with a big belly, getting strange looks from everyone,” she said. “It was difficult to finish all of this before he was born, but I kept telling myself that it would all be worth it.”

She was also working full-time at a CVS drugstore while pregnant. But when pharmacy school started, she had to significantly cut her hours. The pressures and levels of sacrifice were intense.

READ: She refused to abort her son and graduated law school: ‘I don’t think I would have survived without him’

“I continued to remind myself that if I can push through these next four years, it will all be worth it,” she said. “I told myself that I will be able to provide for my son and show him what hard work and dedication looks like.”

The naysayers are proven wrong

Brittany graduated from pharmacy school in May of this year. And a certain someone was brimming with pride at her achievement: her son, Noah, now almost five. And the future looks bright.

“I have been offered a job as a pharmacist at CVS,” she revealed. “I take the NAPLEX and pharmacy law exam in mid-July to become a licensed pharmacist. From there I will transition into the pharmacist position at CVS.”

She and Noah live in an apartment complex just five minutes down the road from her parents.

“It’s nice to be close to my dad and brother, so Noah can have some father figures in his life,” she said. “He feels all grown up when he gets to hang out with them.”

As far as a father for Noah in a more traditional sense of the word, Brittany is putting any prospect of finding a partner in God’s hands.

“Right now, I take each day as it comes,” she said. “I am happy with the way life is going. My hard work has finally paid off and I was able to do it with Noah by my side.”

Speaking from direct experience, Brittany wants pregnant women out there who are contemplating abortion to think about it before making any rash decisions.

“Abortion is not the easy way out,” she said. “There are so many emotional and physical consequences that women go through after getting an abortion. I know that a baby is not part of the plan for this time of your life. However, God’s plan is bigger and better than what you can imagine. God has trusted you with this baby. Please choose to give your own flesh and blood the gift of life.” 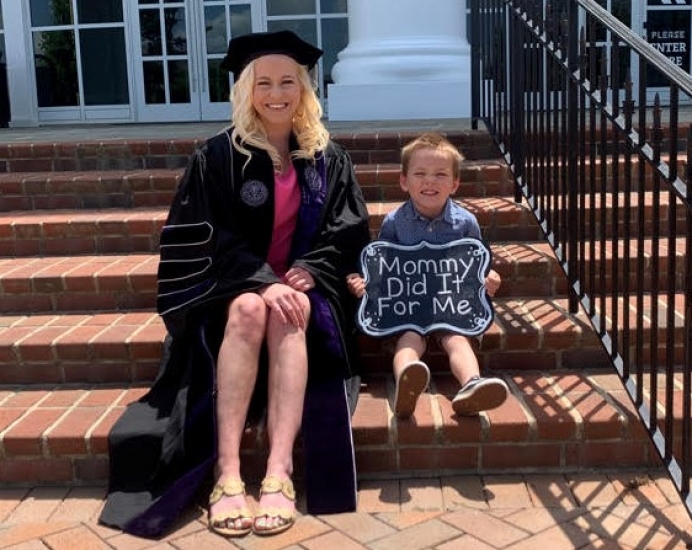 She wants to remind women of the many pregnancy centers out there that will help them. Look them up online. Make a phone call. And, of course, Heartbeat International and its OptionLine contact center are tremendous resources.

Brittany was lucky enough to have a supportive family. Not everyone has that.

But no matter what, a pregnant woman is never alone.

“If you feel like you’re all alone, remember, you have a little baby growing inside you that’s always with you,” she said. “Having a baby, raising a child, is hard, but so worth it. You will experience a love like no other. You will want to be better, do better, because you have a child looking up to you.”

“Noah was my motivation to go back to school. He makes me want to be a better person every day,” she added. “You are much stronger than you think you are, and you can get through this.”