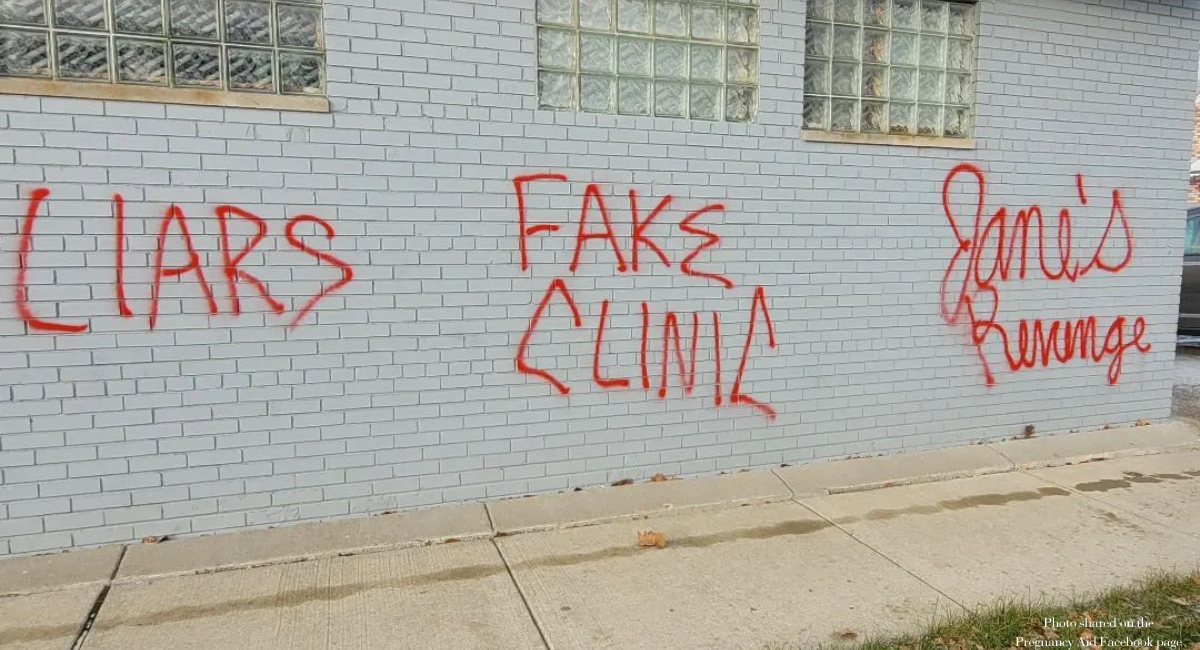 A Detroit-area pregnancy resource center and the home of one of its board members were vandalized with hate-filled messages last weekend.

Catholic News Agency reports that Pregnancy Aid Detroit in Eastpointe, Michigan, was defaced with graffiti reading “Liar,” “Fake Clinic” and “Jane’s Revenge,” which was discovered early Saturday morning. More disturbingly, vandals also targeted the home of one of its board members.

According to reports, the woman awoke around 2 a.m. to see two masked individuals fleeing her home in a Prius. Outside, her garage door and driveway were spray-painted with the threat, “Jeanne, if abortions aren’t safe, neither are you.” The woman’s front door handle was also spraypainted and a window pane was broken.

Pregnancy Aid Detroit Executive Director Nancy Anter condemned the violence. “I think what happened to us and our board member, in particular, is rightfully seen as a hate crime. And I think it should be investigated as such, and I think it should cause alarm nationally, regardless of your political or moral views on abortion.”

Anter also was disturbed by the fact that the individuals involved had to research the pregnancy resource center ahead of time in order to target the board member at her home. “So that’s creepy,” she told the Detroit News. “And it’s criminal. You can’t threaten people with bodily harm. It’s a hate crime.”

The board member, who wishes to remain anonymous, gave a statement to Fox 2. “Although we are shocked and saddened by this attack on our home, we bear no ill will toward the people responsible and pray for them. We hope that the community, through knowledge of the attacks on us and Pregnancy Aid Detroit, will be made more aware of the good work that is done by pregnancy resource centers in non judgmentally responding to the needs of all women who come through their doors.”

Anter echoed the fact that the pregnancy resource center solely exists to help women in need, and she hopes that more people will recognize this. “We need lots of help. We need diapers.” she explained. ” We give help to ladies, mostly low-income health ladies, with baby stuff, maternity, clothes, baby clothes, formula that everyone is still in need of, diapers that everyone is in need of.”

This attack is just the latest in a long string of abortion-related threats that have occurred since the overturn of Roe v. Wade. In November, FBI Director Christopher Wray told the Senate Homeland Security Committee that about 70% of abortion-related violence and threats since June have been carried out against pro-life groups.