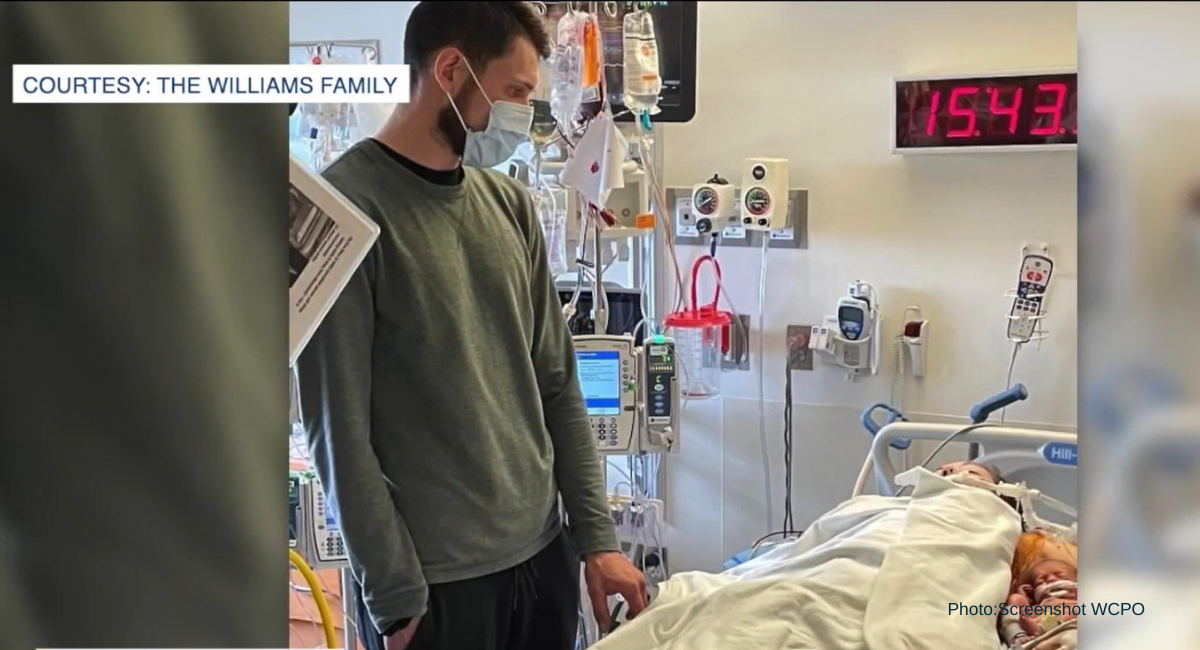 Sean and Veronica Williams were thrilled about her pregnancy and looked forward to welcoming a baby. But their happiness took a sudden turn to fear when Veronica became sick and the baby had to be delivered prematurely to save her life. But in a heartwarming twist, it was little baby Brooklynn who helped Veronica’s heart heal.

According to the family’s GoFundMe page, Veronica began experiencing shortness of breath and a rapid heart rate during her pregnancy. They would soon find out that she was experiencing heart failure. At 32 weeks pregnant, doctors performed an emergency C-section in the hopes of saving Veronica’s life. Veronica, it turned out, had myocarditis, an inflammation of the heart muscle which can lead to death.

“It appears the whole muscle of the heart was completely weak from the inflammation,” cardiothoracic surgeon Dr. George Christensen told WCPO 9. But even after the delivery, Veronica was still struggling; she had to undergo multiple open-heart surgeries, and doctors thought she had less than a 50% chance of surviving.

“This is one of those times that St. Elizabeth stood up, and took the opportunity to do what was best for mom and baby,” Lindsay Calderon, cardiac surgery recovery nurse manager at St. Elizabeth Edgewood Hospital, explained. “And that meant stepping out of our comfort zone. That meant doing things we’d never done.”

Baby Brooklynn had been kept in the NICU, but hospital staff decided to let her see her mother in case Veronica didn’t survive. That encounter changed everything. “They brought her up to me… when they weren’t sure if I was gonna make it or not, and they laid her in my arms,” Veronica said. “I don’t remember it, but they did do that.”

Incredibly, at the moment that Brooklynn reunited with her mother, Veronica’s vital signs improved. “It was probably a moment none of us will ever forget — just the vital sign reactions of mom and baby,” St. Elizabeth NICU Manager Keri Hinson said. Calderon added, “And I don’t think there was a dry eye in the station. And getting to actually watch it, and be a part of it … was an amazing feeling.”

Veronica was eventually diagnosed with a rare form of myocarditis, in which her body’s immune system was attacking her heart. Getting that diagnosis meant Veronica was able to get the treatment she needed, and eventually, even go home. “It’s like sad and happy at the same time,” Veronica said. “Just sad how everything went down, but I’m grateful to be here still.”

By May, the family was together again, including Brooklynn, who graduated from the NICU. Though Veronica is still receiving treatment for myocarditis, they’re grateful for what they have now.

“There’s still a lot to figure out and only time will tell what the best course of action will be but she feels more like herself being home,” Sean wrote on their GoFundMe page. “Celebrating Mother’s Day with Veronica and Brooklynn outside the confines of a hospital is something we will never take for granted. Thank you everyone who was involved in their care, to God who makes all things possible, and to an amazing support system!”

While abortion advocates claim that abortion is necessary for women who experience complications during pregnancy, killing a baby through abortion prior to delivery is never necessary. An emergency C-section such as Veronic underwent takes about an hour, while an abortion at 32 weeks would take three to four days, putting the mother in more serious danger if her life was truly at risk.