Colorado Gov. Jared Polis recently signed a bill into law that guarantees a (false) right to abortion — even late abortions through 40 weeks of pregnancy. However, Politifact has weighed in on Live Action’s social media posts regarding the law, calling Live Action president and founder Lila Rose’s tweet about the bill “false.”

Colorado’s Reproductive Health Quality Act ensures that government entities in Colorado cannot “deny, restrict, interfere with or discriminate against an individual’s fundamental right to use or refuse contraception or to continue a pregnancy and give birth or to have an abortion.” In addition to the possibility that health care workers could be forced to commit or participate in abortion, the law forbids the government from restricting abortion in any way. While Colorado already had zero gestational age restrictions on abortion, this law ensures abortion on demand at any time, even in the event that Roe v. Wade is overturned. If a woman in Colorado wants an abortion at 40 weeks, the law says the doctor must not deny that request.

In response to the signing of the law, Rose tweeted, “BREAKING: Colorado Governor Jared Polis has just signed into law a bill legalizing abortions through all nine months, up until the moment of birth.” 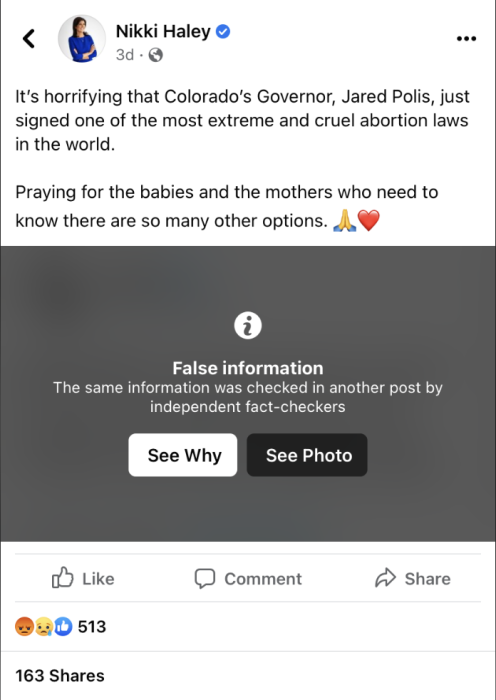 Politifact and Facebook both hit Live Action with erroneous fact checks concerning the law. Politifact claims that though Roe v. Wade doesn’t allow states to restrict abortion prior to the indefinable age of viability but does allow states to restrict abortion after that point, “a baby that is in the process of being born — or ‘moments before birth’ — is unlikely to meet the standard under which abortion is legal.” Politifact notes that “less than 1% of abortions occur at or later than 21 weeks gestation.” Though abortions in the third trimester occur less frequently than those in the first trimester, it doesn’t mean that it is illegal for women to have such late abortions, even in the days immediately prior to her due date.

READ: Late abortions are not insignificant. They kill tens of thousands of children every year.

Politifact has not proven false Live Action’s claim that abortion is legal up to birth by stating that late abortion is rare. According to the Charlotte Lozier Institute, there were 323 abortions committed in Colorado on preborn babies older than 21 weeks in 2018. That’s nearly 4% (not 1%) of the 8,975 abortions that occurred in Colorado that year. These are babies that would be comparable — or perhaps identical — in size and age to the five babies recently discovered in a medical waste bin outside of an abortion facility in Washington D.C. The concern isn’t how many or how few babies are being killed through late abortions in Colorado. The concern is that Colorado allows any undelivered baby to be killed at any point in pregnancy for any reason. 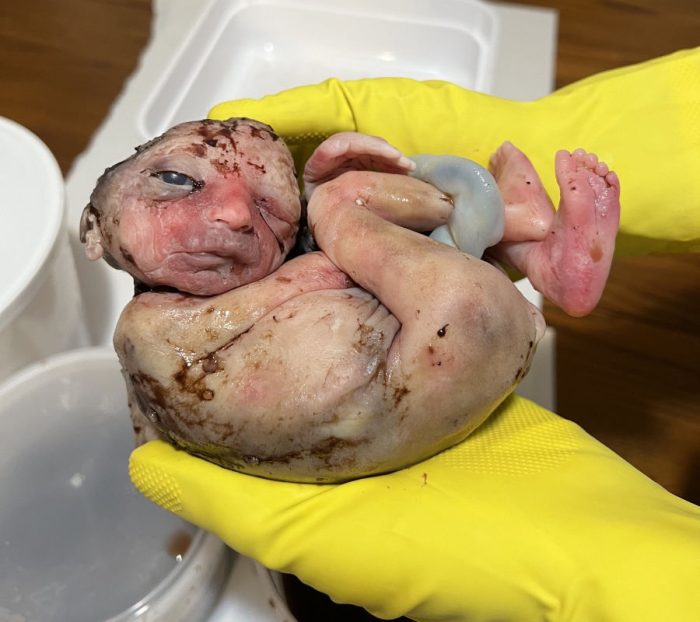 Baby girl Harriet, estimated to be between 28 and 30 weeks, found in medical waste bin outside DC abortion facility.

Warren Hern, an abortionist who has been operating in Colorado for decades, has made it clear that he believes late abortions should be allowed for any reason, even on healthy babies and healthy mothers. And now Gov. Polis has solidified this by making it against the law to deny an abortion to any woman, even a healthy woman pregnant with a healthy baby, at any point in pregnancy — even 40 weeks.

Politifact is banking on the fact that most Americans want to pretend abortion doesn’t happen in the third trimester. But it does and will continue to do so for the foreseeable future in states with such extreme laws on abortion.