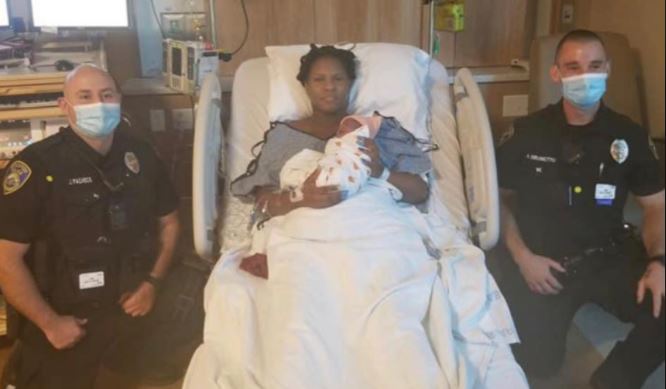 A baby boy decided to make his debut a bit more quickly than expected, forcing his mother to deliver him in a parking lot. Thankfully, police officers were there to assist the anxious parents.

On September 27, the parents were driving to the hospital in Stockton, California, when they realized they weren’t going to make it there on time. A police car was nearby, reports the Western Journal, so the father pulled up next to it and told the officer what was happening. Four minutes later, the baby was born. Thankfully, two officers with medical experience also arrived on the scene.

“This morning, at 7:46 am, a Stockton PD Officer was flagged down by the father at Washington St / El Dorado St,” the police department wrote in a Facebook post. “He pulled up next to the officer and advised his wife, who was in the front passenger seat, was having a baby and needed him to take them to the hospital. The officer directed him to pull into the Police Department’s front lot. The officer called dispatched and aired for a Code3 ambulance for a woman in active labor.”

The post continued, “The officer tried to keep mom and dad calm and advised them the ambulance was on the way, at which time the mother’s water broke and the baby started to arrive.”

Baby Semaj, whose name reportedly means “obeying the Lord,” and his mother, Sharda D’Naye, are both said to be doing well. D’Naye shared the photo of herself, her baby, and two police officers on her Facebook page and said, “Getting in my car will always bring me back to this day!”

In 2019, a police officer saved a baby girl who had stopped breathing in her parent’s car. This year, that same officer became the baby girl’s godfather. In 2017, another police officer adopted the baby of a drug addict he found after she tearfully told him she “desperately hoped” that someone would adopt her baby.