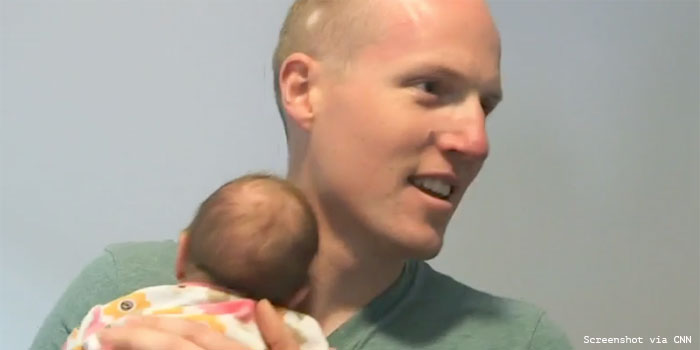 When Officer Ryan Holets found an eight-months-pregnant Crystal Champ about to shoot up heroin behind a convenience store in Albuquerque, New Mexico, he was so sad and burdened about her situation that he did the one thing he could think of to do: offered to adopt her baby.

Genuinely stunned to find that Crystal was both pregnant and homeless, Ryan asked her why she would do drugs while pregnant. Their 11-minute interaction was caught on Ryan’s body camera. “You’re going to kill your baby,” he told her.

Crystal broke down in tears at his words.

CNN notes that during their conversation, “Champ emotionally told Ryan that she desperately hoped someone would adopt her baby.”

A police officer explains to @edlavacnn how he came to adopt a baby from a pregnant drug addict: “I just felt God telling me, ‘Tell her that you will do it because you can.'” https://t.co/gtfadLV75Y

Ryan Holets’ reaction was obviously unexpected and unconventional. But he says he felt it was what he was supposed to do. “I just felt God telling me, ‘Tell her that you will do it, because… you can.'” He showed her a photo of his wife and children. When he did, Champ was reportedly ‘stunned’ and looked at him to make sure he was “genuine” about offering to adopt. CNN says, “She realized instantly, her prayers had been answered.”

According to FaithWire, the Holets family had felt a strong calling toward adoption already… they just didn’t realize they’d be doing it so soon:

Rebecca [Holets], too, said that she and her husband felt “called” by God to adopt; the couple already had four children, including a 10-month-old at the time. While they planned to do so sometime in the future, those plans were clearly expedited.

Ryan was at the hospital when baby Hope was born, just three weeks later. Unfortunately, she also was addicted to heroin and went through weeks of withdrawal (and treatment for withdrawal) in the hospital. According to CNN:

Many experts says intensive intervention in early infant care is crucial to ensuring a healthy future for the baby. After the initial medical treatment, Dr. [Heather] Pratt-Chavez says “skin-to-skin” touch is crucial in lowering stress levels and ensuring the most nurturing development.

A baby’s sensitivity to touch actually begins in the womb. While it is commonly accepted that babies are able to feel pain by 20 weeks (this study suggests it may be possible as early as eight weeks), one study notes that by 35 weeks, preborn babies can actually distinguish touch from pain.

Crystal told CNN that she wanted a better future for her baby girl, knowing she and her daughter’s father, Tom Key, simply could not raise Hope while continuing to struggle with opioid addiction. “We did not give her up because we didn’t want her,” she said.

Now, Hope is home with her four siblings and her adoptive parents and is doing well, though she may experience developmental difficulties. While the ravages of Crystal and Tom’s opioid addiction make make it difficult, Ryan told CNN that he wishes for Hope’s birth parents to somehow be a part of Hope’s life.

Ryan and his family believe it was God who turned an ordinary call that day into a moment of destiny. “God brought us all together,” Ryan told CNN. “I really don’t have any other way to explain it.”